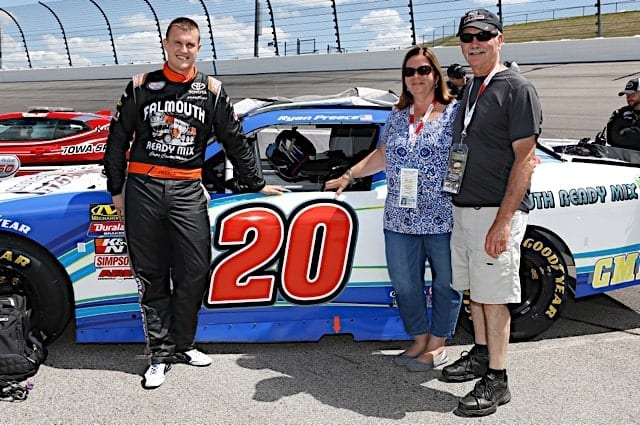 Relegation is a big part of most stick and ball sports. Do poorly and move back to the minors. Finish with a losing record, get knocked back a league.

But in NASCAR, where driver performance varies year to year, relegation isn’t as common. You might move from team to team, but moving down a level (from the Monster Energy NASCAR Cup Series to the XFINITY Series, for example) is seen as a career killer.

Sure, there have been a few that have taken a step backward and have been able to come back at the Cup level—Regan Smith and Brian Vickers come to mind in recent years. But for all those who have left the Cup Series by force or by choice saying that they would return at a later date, very few have made any starts since, let alone a full season.

This doesn’t bode well for drivers like Justin Allgaier and Michael Annett, both of whom left HScott Motorsport’s Cup program within the last two years and now currently compete for JR Motorsports in the XFINITY Series. Their teammate, Elliott Sadler, has only made nine Cup starts since leaving the top series after the 2010 season. And with the young talent moving up the ranks at breakneck speed, it seems unlikely that any of them will ever race a full Cup schedule again, at least certainly for prime teams.

And in the XFINITY Series, if you’re not moving up as a young gun, you’re moving backward, even if you’re jumping from similar ride to similar ride. Young, thought-to-be-the-future drivers like Dakoda Armstrong, Ross Chastain, Ryan Reed and Darrell Wallace Jr. are all floundering despite winning a race (in Reed’s case), making Cup starts (Wallace, Reed and Chastain) or being in playoff contention (Armstrong).

Why is this? Finances. Cup interlopers. Camping World Truck Series kids moving up. There’s little shot to make a move upward, and while these drivers are making the most of their starts, it’s unlikely to be enough to get them that top-flight ride.

They never even had a shot at Cup, and they very well could be relegated to the XFINITY or Truck series along with those Cup outcasts.

Which makes stories like Ryan Preece’s even more inspiring.

Preece, a longtime Whelen Modified Tour driver, had a shot at a full XFINITY campaign last year for JD Motorsports. He didn’t do anything flashy, ending the season with just a single top 10 and a 17th-place finish in the points standings. Not a bad year but nothing groundbreaking either.

Instead of continuing down that path in 2017, Preece surprised by returning to the Modified circuit. While fans in the Northeast were excited to have a championship-winning driver back in the field on a full-time basis, some thought that Preece had self-relegated himself. After all, how often does a Modified driver have a shot at the big leagues these days? Not often. To have passed on opportunities was akin to career suicide.

Not Preece, though. He was able to score a two-race deal with the series’ juggernaut team, Joe Gibbs Racing, and looked to make the most of his opportunity. A solid finish of second in his 2017 debut at the Modified’s Daytona 500-esque track of New Hampshire Motor Speedway turned heads, and then, of course, we all know what happened last weekend at Iowa.

Pole. Win. Back to the sidelines.

History would suggest that Preece will join Donny Lia as a recent Modified winner in the top three series who might not do much more on that level, but Preece is looking to buck the trend once again.

Because while most drivers who move back a series don’t tend to get shots or, if they do, make the most of them, Vickers and Sam Hornish Jr. have both shown it’s possible in this decade to make a return.

Both competed for championships, both made it back to Cup and both performed at that level, Vickers’ win at NHMS the highlight for relegated Cup drivers coming back.

Preece has already snagged an additional run in the No. 20 at the standalone XFINITY Series race at Kentucky Speedway, where he’ll do what he’s been doing all year—surprising everyone. And this is good, one of the feel-good stories that the sport needs at the moment. Amid sagging attendance, poor television ratings and the impending retirement of Dale Earnhardt Jr., fans need something to remind them of the good old days where an everyman driver could make it to the top level on nothing more than pure talent. Preece is in the middle of writing just that story.

Watch him add another chapter when the engines fire in Sparta, Ky., next month.

Darrell Wallace has never won an Xfinity race. He needs to win there before moving up. Earn it, don’t use diversity to move up. Another Danica.