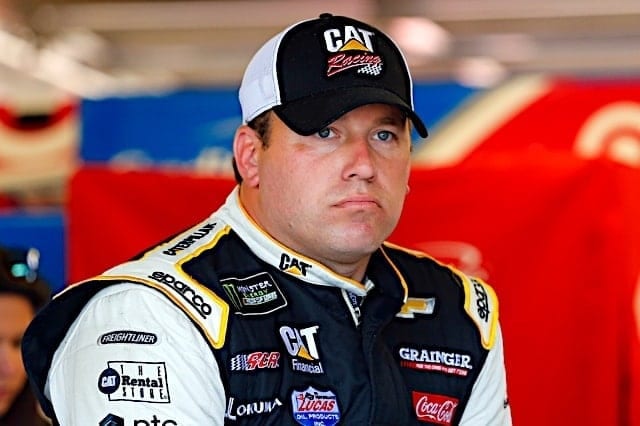 Coming into 2017, Richard Childress Racing was anxious to get back into Victory Lane, as it has been for each of the past three years.

Turns out, in this case, the fourth time was a charm.

It took only four races in 2017 before Ryan Newman stopped the skid. He punched his ticket into the playoffs by pulling a surprise upset at Phoenix International Raceway.

Newman’s victory snapped a personal 127-race winless streak, dating back to the Brickyard 400 in 2013. That’s also where he won his last of 51 career poles. For RCR, it snapped a 112-race winless streak that had lasted through multiple driver/crew chief changes. Kevin Harvick was the last driver to record a victory for the famed organization, winning in November 2013 at Phoenix International Raceway before jumping ship to Stewart-Haas Racing.

Now, with only five races remaining until the playoff grid is set, RCR has two of their three cars postseason eligible. Newman sits 15th in the overall championship standings, but sits 10th on the playoff grid by winning Phoenix. The No. 31 team is riding a wave of momentum after recent top-five finishes at Daytona International Speedway and the Brickyard.

“Phoenix was fun,” Newman told Frontstretch at Pocono Raceway. “That was something that we fought hard for, but it’s kind of been a little struggle ever since. I would say that we have definitely rounded a corner and are definitely more competitive than we were two or three months ago, which is super important to me because we’re not far out from the playoffs.”

Through the first 21 races of 2017, Newman has four top-five and seven top-10 finishes. Compared to his two RCR teammates, the Indiana native is the flagship driver this season at the organization. Austin Dillon may have won the Coca-Cola 600, earning him a playoff spot but he only has one other top-10 finish. Paul Menard, meanwhile has three top 10s, all coming at the restrictor plate races and has recently become a lame duck. (He’ll be with the Wood Brothers in 2018.)

Newman’s proud of the grit his No. 31 team, led by crew chief Luke Lambert, has shown.

“Just fighting hard and racing smart,” Newman said of their strengths. “At some of the restrictor plate tracks, getting ourselves top fives when maybe our car wasn’t as good, or playing it smart and not racing, and doing what we had to do at the right time.”

That strategy has allowed Newman to avoid the pitfalls of other competitors. He’s fifth in laps completed (5,699) and has just two DNFs in a year that statistic has ticked up considerably.

It’s a veteran type resume for a driver who’s become, at age 39 one of the elder statesmen of the Cup circuit. He’s one of merely a half-dozen drivers still racing full-time who were still around before NASCAR even had a postseason system.

Since the first playoff format, the Chase, was implemented into the sport in 2004, Newman has also been a part of all the different changes. At first, it was only the top 10 drivers in the standings at the end of the 26th race at Richmond Raceway who had a shot at the championship. The 10-race playoff included no bonus points and no eliminations.

In 2007, NASCAR expanded the playoff field to the top 12 drivers in the championship standings preceding Richmond.

Then, in 2011, another change was made. The top 10 in points would make the playoffs; behind them, the two drivers with the most victories between 11th and 20th in the standings qualified as Wild Cards.

In 2014, the playoff field was expanded to 16 drivers. Both a victory and remaining inside the top 30 in the season standings would get your team in the playoffs; the rest of the positions were filled by points. This year, it has changed, yet again, with playoff points being introduced to races for whoever wins a stage. The winner of the actual race would get five playoff points that they can carry through until the championship at Homestead-Miami Speedway.

It’s been a lot for everyone involved in the sport to adjust to. Unfortunately, Newman’s not a fan of all the chaos.

“It’s not good that it keeps changing,” he said. “I think it changes for the right reasons, but there’s no reason why we didn’t get it right the first time. At some point, we’ve got to leave it alone and let us do our thing. The NFL doesn’t change the length of the field or the width of their field or the size of the ball each and every year, so I don’t understand why we’re not patterning the sport off of theirs and keep doing that.

“I think the way it is now is good. I still think we should have a two or three-race champion and not a one race champion. I guess you can’t have everything in the world.”

In the 2014 edition of the playoffs, Newman finished a career-high second in the standings, only behind Harvick, after finishing runner-up in the race to the No. 4 team. What do they need to work on the most to get a second crack at the title?

“I think our intermediate program needs the most help,” Newman said. “I think our short tracks have probably been our strength. Superspeedways, we’re kind of average, but we’ve had decent finishes. You never know. If we can win a race in each of the segments of the playoffs then everything will take care of itself.”

Thus far, there have been six 1.5-mile tracks and Newman has an average finish of 24.8 in those events. During the final 10 races, there are five mile-and-a-halves, making improvement crucially important. Compare that to the five short track races this season, including Phoenix and New Hampshire Motor Speedway, where the No. 31 team has an average finish of 11.4. They also earned that victory in the desert and top-10 finishes at both Martinsville Speedway and Richmond.

Can they turn those middling numbers into postseason success? Heading into the playoffs, Newman knows the key to taking that extra step towards the top.

“Raw speed,” the Purdue engineer claimed. “I think a little bit of everything. You have to continue to improve on everything. That’s myself, making the right strategy calls, the pit crew guys picking up speed and not making as many mistakes. Those types of things. That’s what wins you a championship. There’s always time. It’s a matter of how hard you work.”

Never will make it to round two. He may take out a favorite in the playoffs though!