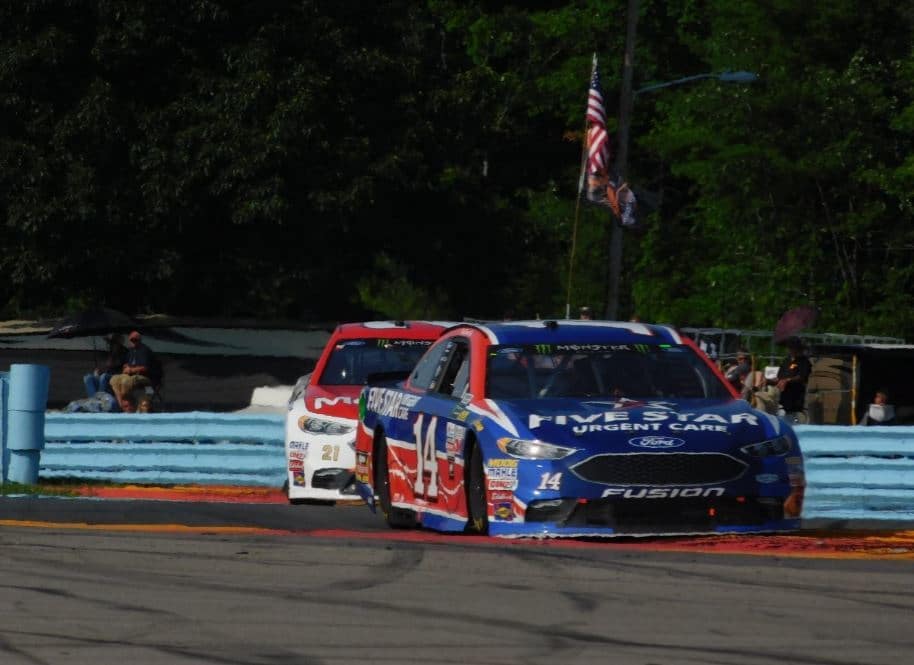 Clint Bowyer was forced to start from the rear at the beginning of the I love New York 355 at the Glen after the team repaired his brakes, while the No. 14 turned one of the top 12 laps in the first round of qualifying.

Like Denny Hamlin, Bowyer failed to make an attempt in the second round of qualifying fearing that the team may lose its brakes during the run. The Kansas native started the event from 32nd.

In a race that was filled with mixed pit strategy, Bowyer made a pit stop during the first run of the race, resulting in a poor finish and even losing a lap, which hindered crew chief Mike Bugarewicz’ plan. At the end of the first strategy the No. 14 made an additional pit stop after getting the free pass.

In Stage 2, Bowyer made a pit stop, this time staying on the lead lap, resulting in a 29th-place effort.

However, all hell broke loose in the final 36-lap dash to the finish in which Bowyer restarted third, pitting for fuel only during a caution that came out for Landon Cassill.

“I don’t know,” Bowyer said on if he had the right strategy. “How the hell do you know, I can’t see everybody else. You hate to let those cars go by, but you’ve got to be careful there. I don’t know if we could have won the race, the [No.] 78 did, he was kind of in an arms reach, but it could have killed your chances too.”

Throughout the final laps, drivers were running out of gas left and right as Bowyer slowed way down in order to preserve fuel. The No. 14 gave up positions late in the race to Ryan Blaney, who then ran out of fuel when taking the lead after Brad Keselowski pitted. While Bowyer continued to drop his pace, he lost positions to Matt Kenseth, Daniel Suarez and Denny Hamlin who all finished ahead of him in the race rundown.

Evidently, Bowyer’s last three victories, all coming in 2012 with Michael Waltrip Racing were by fuel mileage, including his triumph at Sonoma Raceway, the other road course on the NASCAR schedule.

With Kenseth earning stage points in the second stage and finishing in second with Bowyer rounding out the top five, the No. 14 team lost 11 markers, now 28 behind the cutoff with four races to go. But making it to the end was an absolute must for the Stewart-Haas Racing team.

“That’s the hard thing when you have them at arms reach and you want to go for it,” Bowyer said. “That’s the win that will put you into the playoffs right there in front of you, but if you run out of gas that’s probably the dagger that will knock you out for good to. That’s the right thing. We have to keep knocking on the door and it’s another top five.”

Through the first 22 events of 2017, Bowyer has five top-five finishes with 10 tops 1os, winning a stage at Pocono Raceway last weekend. But admittedly so, this race could have been his best chance at a victory stamping him name into the playoffs.

“I don’t know where everyone else finished,” Bowyer said. “It is what it is. We will just keep digging and working on it.”

Why is this a story? Big deal.