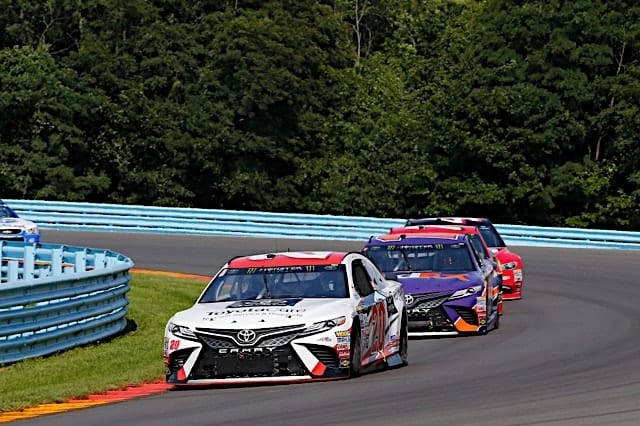 Once again, the lasting memory from Sunday’s race at Watkins Glen International will be the final lap.

As the front-runners battled each other and agonized over their depleted fuel tanks, Matt Kenseth kept edging closer to Martin Truex Jr.  Kenseth’s charge proved to be too little, too late, though it resulted in a close finish with Truex.  The finish could have been even closer, or had a different outcome, if the two drivers’ seasons were not so far apart.

Truex has been one of the most dominant drivers of 2017.  The No. 78 team earned its fourth win on Sunday, extending both Truex’s point lead and advantage atop the playoff standings.  Stage wins have been the bread and butter of the No. 78 team’s success.  Truex has racked up 14 of them through 22 races, five more than Kyle Busch, who stands second in stage wins.

All told, Truex has accumulated 34 playoff points, and he would gain another 15 if he holds the points lead through Richmond Raceway next month.  The 2017 season has been a huge success for Truex.

On the other hand, Kenseth is having a rough season, arguably the worst of his career.  A series of crashes in the opening weeks put Kenseth behind from the beginning, and he has spent most of the year clawing his way up the point standings.

After Watkins Glen, the No. 20 team sits ninth overall, with two playoff points.  However, being within the top 10 in points might not be good enough to get Kenseth into the playoffs.  Even after a strong run at one of his worst tracks, Kenseth remains a slim 28 points ahead of Clint Bowyer for the final playoff spot.

A win would have made all of Kenseth’s playoff problems go away.  Yet pursuing the win could have had disastrous consequences had the No. 20 car run out of fuel.  Kenseth was, and remains, in the unenviable place of having to protect his points position and potentially gamble for wins.

Truex has no similar concern.  Certainly, Truex gambled with fuel to get the win as well.  Losing the win at Watkins Glen would have resulted in five less playoff points for Truex, which could be crucial during the postseason.  Yet a failed fuel mileage play would not have resulted in catastrophic, long term consequences for Truex.  The No. 78 team will be in the playoffs, likely at the top of the standings after Kyle Larson had another lackluster day, falling to third in the overall standings.

To Kenseth’s credit, he has been running as well as he has all season right now.  Sunday’s second-place finish was Kenseth’s fourth consecutive top-10 finish, the first time he has had four in a row since last year’s postseason.

However, Kenseth’s 2017 struggles still played a part in how Sunday’s race ended.

The No. 20 team did not have the option of throwing caution to the wind like the No. 78 team did.  If Kenseth had won earlier in the season or if he had a larger points cushion on the drivers outside the playoffs, perhaps he could have turned up the heat on Truex a little sooner.  But the number one priority for Kenseth had to be getting to the finish with a good result.

Effectively, the circumstances of the playoffs and past performance in 2017 gave Truex an advantage in the closing laps that helped him earn the victory.

Going forward, Truex and Kenseth will likely have differing agendas.

In Truex’s case, the next month is all about collecting wins for the playoffs.  With a 116-point gap over Busch, who is now second in the standings, the No. 78 team can gamble for more wins with limited consequences.  Top 10s and even top fives will not do much for Truex in the next four races.  If the No. 78 team swings for the fence and strikes out in one of the next four races, Truex will have at least gone down doing what he needed to do to build his points lead.

Kenseth will be chasing a win as well, but he remains in a tight points battle with Chase Elliott, Jamie McMurray, and Bowyer.  Unless all four of those drivers sweep the next four races, at least one of them will be left out.  A win would be the safest route to the playoffs, but Kenseth could still get in if he keeps marching up the points standings.  During the course of his top 10 streak, Kenseth has gained 71 points on Elliott and 61 on McMurray.  A good result at Michigan International Speedway next week could allow Kenseth to leapfrog both of them.

Can Kenseth keep the good finishes coming all the way to the playoffs?  The recent improvement of Joe Gibbs Racing suggests that he will have the opportunity.  Yet it is also worth noting that Kenseth’s season began to turn around after he made the announcement that he would not return to JGR next year.

The impending breakup of Kenseth, crew chief Jason Ratcliff, and the No. 20 team make it unlikely that the team could match the No. 78 car in a championship battle down the stretch.  Throw in the fact that Kenseth might not have a ride for next year, and the pressure could remain on him all the way to Homestead.  Yet with JGR’s lineup for 2018 settled and the cars getting faster every week, Kenseth could join Truex in the playoffs sooner than Richmond.