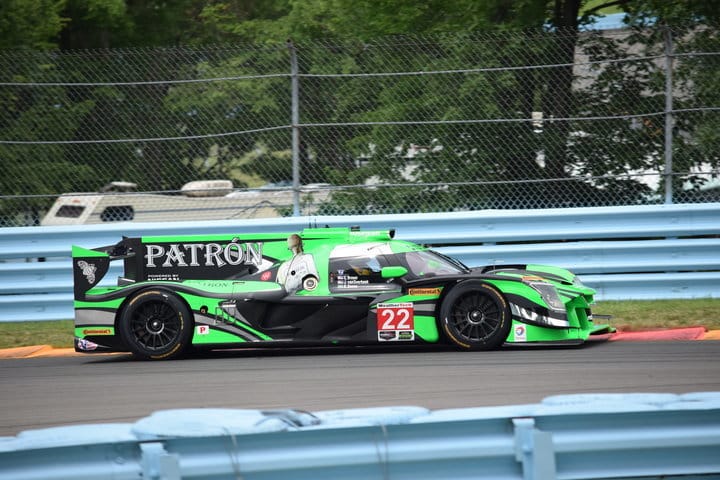 On Sunday afternoon, Tequila Patron ESM’s Pipo Derani assumed the lead during the final yellow when JDC/Miller MotorSports’ Stephen Simpson was forced to pit for emergency service.  From there, Derani was able to pull away to take the first-ever victory for the Ligier-based Nissan DPi.

Afterwards, Derani was proud of the team’s accomplishment.

“It’s been a long season for us,” Derani said during the post-race press conference. “We started very late, and to be honest, nobody thought within the team we’d be able to challenge for victories after the tough start we had. Speed wasn’t a problem too much but reliability. It shows to be able to challenge for victories now how hard we’ve been working behind the scenes. I never stopped believing in this team.

“We worked really hard together today, it was flawless,” Derani continued.  “We had to save fuel because our mileage wasn’t as good as the other guys. So it’s a nice payback to the hard work we’ve been doing. It’s nice to give the team a victory, and thanks to Scott [Sharp] and Ed [Brown] to keep pushing and trying to make the program better and better. I knew on the restart that it was my only chance to overtake the 10. They said it would be difficult because the track is high-downforce and you lose that when you get really close to a guy. I used the slipstream thought to pass him. Outside on turn one was the only place to go. I knew he’d play it safe because they are going for the championship. I’m glad it worked out, because the team was working so hard. This win means a lot to me.”

Early on, it was Wayne Taylor Racing’s pole-sitting No. 10 Cadillac DPi-V.R. of Ricky Taylor that set the pace.  The entire rest of the class was nose-to-tail while Ricky pulled out an advantage.  Behind the No. 10, the Tequila Patron ESM Nissan DPis of Scott Sharp and Johannes van Overbeek were in the hunt, along with Action Express Racing’s No. 31.

The race was caution-free until the No. 24 BMW M6 GTLM of John Edwards stalled at pit entry with 55 minutes to go.  Everyone made their final stops to set up the sprint to the finish.

On the restart, Derani was able to sweep around the outside of Jordan Taylor entering turn 1 to take second overall.  Simpson had claimed the overall lead by staying out under the previous yellow.  However, shortly after the restart, the No. 911 Porsche of Dirk Werner was forced into the grass entering turn 1 and spun into the sand trap.

Werner’s spin brought out another full course caution and eliminated any advantage that Simpson could have gained from his strategy.  Once he stopped, Derani assumed the advantage and held on to win.

Derani and van Overbeek’s margin of victory was 2.356 seconds over the Taylor brothers.  Team owner Sharp and Ryan Dalziel in the No. 2 Tequila Patron ESM Nissan DPi were third, followed by Dane Cameron and Eric Curran in the Action Express No. 31 Cadillac.  Visit Florida Racing’s Marc Goossens and Renger van der Zande were fifth in their new Ligier JS P217.

In Prototype Challenge, it was once again Performance Tech Motorsports’ day.  James French and Patricio O’Ward had multiple seconds of pace over three of the four drivers in BAR1 Motorsports’ driver lineups.  The No. 20 ended up spending time in the paddock, costing them 10 laps.

Before the full course cautions came out, O’Ward nearly had a full lap over Gustavo Yacaman in the No. 26.  The yellows allowed the No. 26 to stay on the lead lap, but they could not prevent French and O’Ward from winning their seventh straight race.  The margin of victory was 22.088 seconds over the No. 26 of Yacaman and Mark Kvamme.

In GT Le Mans, Ford Chip Ganassi Racing’s No. 66 of Dirk Müller and Joey Hand dominated the race.  Müller won the class pole by three-quarters of a second on Saturday and brought that speed into the race.  As a result, they were never seriously challenged for much of the race Sunday.  Late in the going, Porsche GT Team’s Laurens Vanthoor put pressure on Hand, but Hand was able to hold on to take the victory.

With the late cautions, the No. 912 Porsche of Vanthoor and Gianmaria Bruni was less than a second behind at the finish.  The No. 67 Ford of Ryan Briscoe and Richard Westbrook was third in class, followed by Corvette Racing’s No. 3 for Antonio Garcia and Jan Magnussen.  The No. 4 Corvette of Oliver Gavin and Tommy Milner was fifth.

GT Daytona saw Turner Motorsport assert dominance with their BMW M6 GT3.  Jesse Krohn qualified the No. 96 BMW second and wasted no time in snatching the lead away from pole sitter Jeroen Mul on the first lap.  From there, Krohn opened up a decent gap on the rest of the field.

Sunday was a terrible day for Michael Shank Racing with Curb-Agajanian.  After a substantial thrash to repair the No. 93 after a Saturday morning crash, Katherine Legge was spun out in turn 8 after contact from Madison Snow.  The contact broke a suspension part, resulting in repairs behind the wall.  The No. 86 Acura had a left rear tire failure just past the pit entrance.  Grinding away for miles while trying to get back around hurt the rear suspension and put the team out.  13th and 14th-place finishes in class were not what the team was expecting.

Krohn and teammate Jens Klingmann only relinquished the lead during a round of stops under green on Sunday.  After the final restart, Klingmann was able to pull out to a decent lead and hold on for Turner Motorsport’s first win of the year.

The margin of victory was 3.163 seconds over the Park Place Porsche of Jörg Bergmeister and Patrick Lindsey in another strong run.  Stevenson Motorsports’ Lawson Aschenbach and Andrew Davis were third, followed by Riley Motorsports’ Jeroen Bleekemolen and Ben Keating in the best of the Mercedes.  Scuderia Corsa’s Alessando Balzan and Christina Nielsen finished fifth.

The next round of the WeatherTech SportsCar Championship is the Michelin GT Challenge at VIR.  That is a round for the GT Le Mans and GT Daytona classes only.  It will be held on Aug. 27.