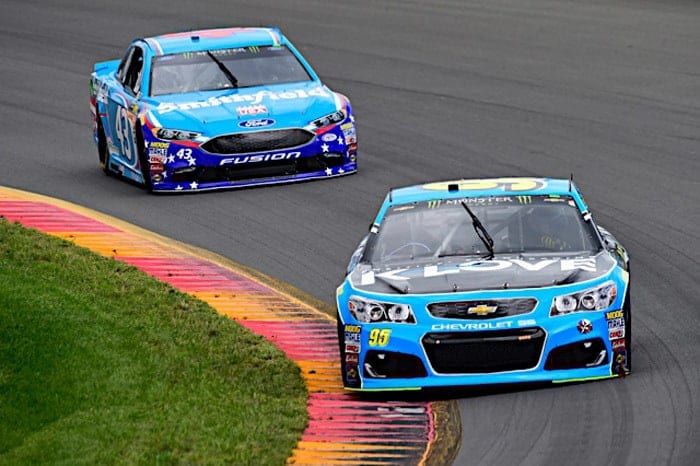 Dale Earnhardt Jr. was addressing the media at Watkins Glen last weekend when the subject turned to driver contracts and salaries.  The NASCAR economic climate, as everyone knows has changed drastically in recent years.  When the NASCAR fad was at its height almost 20 years ago, corporate interest and driver income skyrocketed. For a while, that was sustainable to a degree as teams were able to put together high-priced deals.  Sponsorship went from $10-15 million to $25-30 million seemingly overnight, and drivers went from making a million or so a year plus a percentage of winnings to five or ten times that.

Now, sponsorship has become a buyer’s market — teams can’t demand the same outlay as a few years ago, and that means they also hit a point where driver salaries will start declining. In the short term, that seems as though it will hurt competition as most teams struggle for funding and some fall behind.  If just one or two teams defy the odds and continue to operate at the costs of 15 years ago, they’ll further stretch the difference between rich and poor.

But if everyone has to cut back?  That could actually help the sport as a whole, especially in terms of what fans see on track. It could mean more sponsors, as those who were priced out years ago could potentially return or new ones come in at a lower price point. One-off deals with local businesses to the tracks could make a comeback.

Richard Petty Motorsports partner Andy Murstein has lobbied NASCAR for a spending cap, which would be a giant step in the right direction, though the logistics of such a cap would be very difficult as would enforcing it.

In an NBC Sports article, Murstein said that spending reaches beyond buying cars and engines.

“It’s salaries … its wind-tunnel time, it’s the whole kit and caboodle,” he said. “It’s better for the fans, I think, if there is a level playing field. No one can outspend the other guy. It’s better for the owners. It creates more competition, more excitement.’’

He’s right, and lower driver salaries, with more emphasis on winnings and performance as incentive for a higher percentage, would also increase competition. If drivers had to finish in the top 10 or top five to get a higher cut of the earnings, you might see more aggression throughout the race.

The cost of competition is by far the biggest hindrance for small teams trying to climb the NASCAR ladder.  Even that out, and the sport is put back in the hands of the people whose hands it should be in — the drivers and teams who build the cars.

Top of the Class: Watkins Glen

Ryan Blaney was left to think about what might have been on Sunday after a fuel gamble didn’t quite pan out. Blaney took over the lead in the closing laps when Brad Keselowski was forced to pit for gas, but ran out himself.  The Wood Brothers Ford was still able to roll to pit road, leading to Blaney’s eighth top-10 finish of 2017 (eighth place).

Also finishing in the top 10 Sunday was road course ace AJ Allmendinger. The ‘Dinger was a favorite to win Sunday but struggled with handling for most of the weekend, though he bounced back to run ninth. Teammate Chris Buescher also had a strong day, finishing 11th, so it was a good day overall for JTG Daugherty Racing.

Finally, Michael McDowell is also underrated on the road circuits. The underdog showed everyone why he shouldn’t be overlooked on the right turns Sunday, finishing 12th.  He’s run inside the top 20 in his last three starts at the Glen for Leavine Family Racing after starting and parking for several previous races, improving his finish each time out.

Ty Dillon scored a top-20 finish, coming home 19th. It’s a bit surprising that Dillon hasn’t separated himself from the other Richard Childress Racing-backed drivers this year since it seems as though he’d have an edge in equipment and information coming from his grandfather’s organization. Dillon’s about a spot above McDowell and Buescher in average finish and equal with Allmendinger.

Aric Almirola had a solid day, finishing 21st.  That bests his 2016 finish by five spots, and his average is up by four over last year as well, which is important as his Richard Petty Motorsports team works on re-upping with sponsor Smithfield for next year.

Add David Ragan (27th) and Matt DiBenedetto (28th) to this group because they had a decent if not spectacular weekend, rebounding after a disappointing outing last week at Pocono.

Boris Said climbed into a Cup car for supposedly the final time this weekend, finishing 30th for Circle Sport. That’s maybe a better finish than the team might otherwise have gotten. Newcomer Gary Klutt finished 31st in the No. 15 for Premium Motorsports, which only made the trip to New York State with one car this week.

CATANZARETI: Who Is Gary Klutt? Why Is He Going Cup Racing?

Beleaguered BK Racing couldn’t muster a finish higher than 32nd with Brett Moffitt. Teammate Corey LaJoie was a spot behind in 33rd in the wake of news that another tax lien has been levied against the team’s ownership.

Cole Whitt had some mechanical issues during the race, relegating him to 34th this week. Tire problems sent Landon Cassill back there as well, earning a 36th-place run, next to last in the 37-car field.

There are a few driver changes for this weekend’s race at Michigan.  Derrike Cope will be in the No. 15 for Premium Motorsports, carrying sponsorship from StarCom Fiber while Reed Sorenson will be back with the team in the No. 55. Brett Moffitt will be back in the No. 83 of BK Racing for another week, his second straight race in the Cup Series while Rick Ware Racing is back on the entry list with the No. 51. As of Monday afternoon, RWR had not named a driver.

Say Anything: The Throwback Drama Edition

WHAT. WE WERE GONNA DO THIS https://t.co/BlHwOnOEr7

ITS NOT EVEN A FORD

HOW CAN YOU EVEN BE THE UNDERBIRD NOW

YOU SHOULD HAVE USED THIS CAR pic.twitter.com/4ezB3d3aSM

OR A SCOTT SPEED THROWBAC

Look what we got today! Our @TooToughToTame throwback suit! What does everyone think? pic.twitter.com/QhQHXddgrC

Of course you had to bow back down to your favorite bobble-head, Ryan Blaney ……….again………….even though Martin Truex gave the overrated kid a lesson in how to manage fuel mileage. Blaney was wildly sailing off into the sunset as if he had an extra gas tank………..when, cough, cough, choke, choke, physics caught up with him. Fact is he blew the race. Call it for real for once, Amy. And for the love of all that is American and good, stop calling this Penske driver an “underdog!” (Are you a paid-up member of his fan club too?)

I’ve got a feeling Truex could run 2 laps without a gas tank in the car. Kind of like what Smokey did.

Funny how the racing was better before all the technology entered.

I would be interested to know how much all the new technology costs the teams, as opposed to testing on track. Wind Tunnel, pull downs, engineers, more engineers…what are the costs of all that stuff?