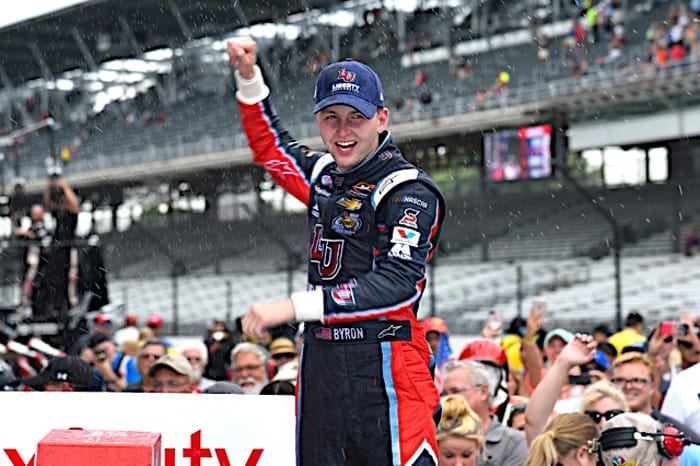 With the recent announcements of Kasey Kahne being released from Hendrick Motorsports at seasons end, 19-year-old phenom William Byron will take over the No. 5 Chevrolet in the Monster Energy NASCAR Cup Series next season. The youngster began racing just five years ago, and has rapidly ascended to the top of the mountain when it comes to North American motorsport.

Is William Byron ready for the Cup Series next season?

Let’s go over some of the main pieces with this announcement, shall we?

Does Byron need to be in the Cup Series next season? No. Hendrick Motorsports could have went a different route and perhaps hired a veteran like Matt Kenseth or Greg Biffle to pilot the No. 5 for the “transition” year before 2019, when Byron would be more experienced and ready.

HMS has Byron. It’s not like he’s going anywhere anytime soon. Why Kyle Busch Motorsports and Toyota let him go is beyond me, but that’s an entirely different conversation.

My answer is no, Byron is not ready for a full-time season in the Monster Energy NASCAR Cup Series.

Most 19-year-olds are moving away to college for the first time, trying to figure out what their career path is going to be and beginning the next chapter in their lives. They’re typically not getting ready to pilot a Cup car, moreover a top-tier ride.

At this point, he’s too young. Even though he’s dominating the XFINITY Series so far this season, winning three races (should be four, shoutout to encumbered wins by Cup regulars) and already having a hefty points lead, time is everything in life. And this sport is no different.

I’ll admit: I’ve gone back and forth on whether or not I think Byron is ready for the big time. But I fully believe a second season in XFINITY, with a possible part-time schedule in Cup, would be of more benefit to all parties involved in this situation.

There have been rumors of GMS Racing making the leap from the lower ranks to the Cup Series at the start of next season. If that happens, they will most likely have support in the form of a technical alliance from Hendrick Motorsports. I think you see where I’m going with this.

Although this is a hypothetical, why not put Byron in a GMS car part-time next season for, say, 15 races, to get acclimated to the top level of the sport, while also diving deeper into the XFINITY ranks and finding the intricacies of what the car does, all while improving himself as a driver?

This would be a bit of a Chris Buescher situation. He is on loan from Roush Fenway Racing to JTG Daugherty Racing, pretty much because RFR didn’t have room (or the funds) for him, but they want to keep him. In this case, it’s about age. Byron is so damn young. He needs more time before hopping aboard the No. 5 Hendrick Motorsports Chevrolet.

Joey Logano was rushed into the Cup Series with Joe Gibbs Racing as a teenager. Although he turned out fine (two championship four appearances after moving to Team Penske), to say he struggled after being labeled a “Sliced Bread” by Hall of Fame Mark Martin would be an understatement.

Casey Atwood was rushed up through the ranks as a young, inexperienced kid who didn’t know what he was getting himself into, too. And that didn’t plan out too well either.

These two examples are ones that are brought up constantly when you mention Byron and his rapid ascension to Cup. But if anybody’s different, it might be this kid.

To think he started on iRacing about half a decade ago and is now about to hop into a Cup car is absolutely insane. But this dude can drive. And I appreciate his talent.

I just don’t think now is the right time for that talent to be showcased. You can’t rush perfection.

Give Me Byron or Give Me Death

There is no doubt in my mind that Byron should compete in the Monster Energy NASCAR Cup Series next season.

I wish teams could still put a fifth car out there for rookies to run a handful of races because Byron would display just how ready he is. If (and when) Kahne gets eliminated from the playoffs this season, I believe that Hendrick Motorsports should pull the trigger and put Byron in the No. 5 for the final races of 2017.

Byron will thrive next year in Cup; it is not absurd to say he might even be the first ever rookie champion. The reason I say this is because of the way he’s performed in as a rookie in every other racing division he has competed in.

I am not sure when Byron first started doing iRacing, but the online racing simulation came out in 2008, and by 2012, the young phenom had dominated his competitors so badly that his dad started looking at getting him into actual race cars.

A lot of people will read that last statement, shrug it off and say, “iRacing is just a game. It doesn’t mean anything.” As a person who dabbles with iRacing in his free time, I can say that it is no joke. It is extremely realistic (when my backwoods Virginia internet is actually working) and racing on it is hard. The few races that I have managed to win on there have been mentally and physically draining.

Byron moved into legends cars in 2013 and completely dominated en route to a championship as a rookie.

He caught the eye of JR Motorsports, which put him in a late model car. He came up shy of winning a championship in late models, finishing second to Josh Berry. If you have seen Berry race in late models, then you know that is like saying you lost to Kyle Busch in an XFINITY Series race.

Byron went on into the K&N Pro East Series in 2015. As a rookie, he dominated and won a championship. He annihilated the competition last season in the Camping World Truck Series and would have won the championship in the new points format.

The whole “playoff points” system that is in place now is because Byron had such a great season and did not win the title. The ultimate sign of a driver’s greatness is when NASCAR starts making rules around them.

Byron has torn up the competition in NXS so far this season as a rookie, already scoring three wins and a narrow second-place finish to Denny Hamlin at Michigan International Speedway.

He is already competing against some of the best drivers in Cup at the NXS level and sometimes besting them, so how could he not be ready for advancement?

A few weeks ago, during one of the NBC broadcasts, Kyle Petty basically said that Byron returning to NXS would be a waste of time, and I could not agree more. There is not a great depth of talent in NXS right now.

You want proof? Look at how badly the inexperienced Ryan Preece and Kyle Benjamin whipped up on the “veterans” of the series at the last race at Iowa Speedway.

Byron has already proved he is one of the best at that level and he would not be able to hone his skills any more by racing against that field for another year. It would cool off his hot streak.

Look at what happened to Chase Elliott; he won the NXS title as a rookie in 2014. Hendrick did not move him up for 2015 because there was no room at the time. However, Elliott’s championship-winning crew chief Greg Ives moved up to become Dale Earnhardt Jr.’s crew chief.

The result was that Elliott’s hot streak cooled off. He only won one NXS race in 2015 and failed to produce a title. He is still looking for the first Cup win; had he moved up in 2015 with Ives, then that might not be the case.

Rick Hendrick is making the right call by putting Byron in the No. 5. With his pure talent and adaptability, he should be a huge obstacle for teammate Jimmie Johnson’s eighth title.

Byron is likely more prepared to be in Cup then that kid Jeff Gordon was back in 1993.