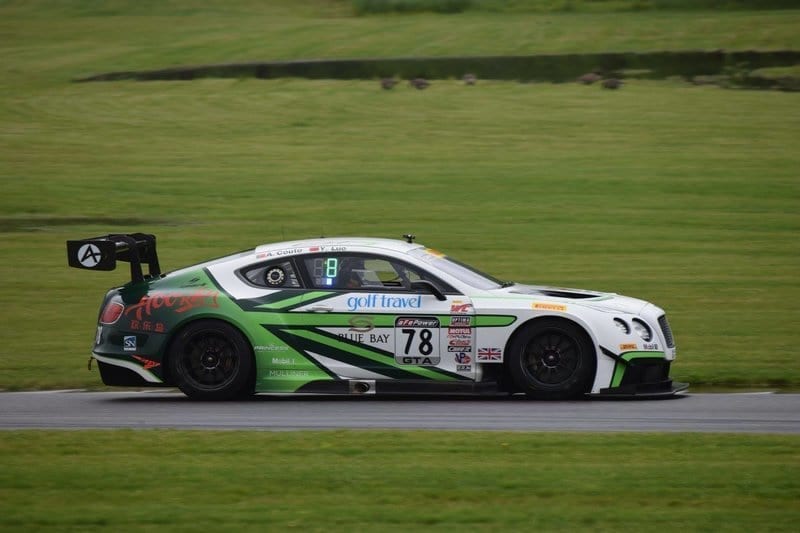 This weekend, all of Pirelli World Challenge’s classes will be in action at Utah Motorsports Campus near Tooele.  Given the track’s location in a desert environment, you’d expect it to be hot and dry in August.  Forecasts say 90 degrees for highs all weekend, but the monsoon is in effect.  As a result, it is actually going to be relatively humid with a slight chance of thunderstorms.

Combined throughout the classes, there are 101 entries for this weekends’ races.  First off, 33 teams are entered in Sprint-X.  There are some changes of note.  K-PAX Racing, as previously announced, has cut back to two cars (Nos. 6 and 9).  Michael Lewis, who co-drove the No. 98 with Mike Hedlund for the first three Sprint-X weekends, is now co-driving the No. 6 with Bryan Sellers, replacing Jonny Kane.

Absolute Racing is back after having skipped the previous sprint rounds at Mid-Ohio.  The No. 88 Bentley is unchanged with Vincent Abril and Adderly Fong back for more.  The No. 78 has a new driver lineup.  Former Formula One racer Will Stevens will make his Pirelli World Challenge debut this weekend with Andrew Kim as his co-driver.  Kim is a regular with Absolute Racing in Asia who ran in the last three GT races of 2016 (two at Sonoma and Mazda Raceway Laguna Seca) for the team.

Laurens Vanthoor is out of the No. 14 in Pro-Am in favor of Porsche Junioren racer Mathieu Jaminet.  Jaminet raced for Alegra Motorsports in the IMSA WeatherTech SportsCar Championship earlier this year, impressing with his pace.  DXDT Racing returns with their lineup of David Askew and Aaron Povoledo.  This time, it is a Mercedes-AMG GT3 that they will race instead of an Audi R8 LMS GT3.

In Am-Am, Tyler McQuarrie is out of the No. 30 NGT Motorsport Ferrari in favor of Jonathan Ziegelman.  Ziegelman has no prior starts in Pirelli World Challenge, but has raced for NGT Motorsport in Porsche GT3 Cup Challenge.

GT Cup sees DXDT Racing expand their entry with a Lamborghini LP620-2 for Brandon Davis and Jeff Burton.  Note that this is not the Jeff Burton you’re thinking of.  This Jeff Burton does not work on race broadcasts for NBC, commentate from scissor lifts with inflatable flamingos on it, or mentor his son that races part-time in the Camping World Truck Series.  The PWC Jeff Burton lives in nearby Salt Lake City and is making an infrequent appearance on the grid.  As for Davis, he tends to jump around between Pirelli World Challenge and the IMSA WeatherTech SportsCar Championship.  Most recently, Davis co-drove in the Northeast Grand Prix at Lime Rock Park for The Racers Group with James Davison.  He was in position for fourth in class before the car quit with seven minutes to go.

Finally, it should be noted that Sprint-X also includes the GTS class.  As a result, there are teams entered in both Sprint-X and the regular GTS class races.

GTS sees a total of 18 entries for their standalone races.  Only six of those cars will be running in the regular GTS division.  Performance Motorsports Group, PF Racing and ANSA Motorsports’ No. 13 are not entered.

GTSA sees the Ian Lacy Racing Ginettas of Drew Staveley and Frank Gannett return for their second go-around of the year.  The JCR Motorsports No. 89 for Fred Roberts is not entered after Roberts had a huge crash at the start of Round 11 at Mid-Ohio.  Also, Case-It Racing is back up to two cars this weekend with the No. 018 of Cameron Cassels back in the fold.

The TC/TCA/TCB races will be the busiest of the weekend as 50 teams will take to the track.  The TC class will have 33 cars on track.  A full two-thirds of those cars will be BMW M235iRs.

Salt Lake City-based Rearden Racing has a huge commitment this weekend with four entries.  This may sound like a new team, but it is not.  It is what used to be CA Sport and before that, Skullcandy Team Nissan.  They have entered a Nissan 370Z for longtime Russian driver Vesko Kozarov, along with BMW M235iRs for Jeff Kearl, Greg Warnock and Daren Jorgensen.  Kearl, Warnock and Jorgensen have competed for the team in the Pirelli GT3 Cup Trophy in Porsche Cayman GT4 Clubsports that the team is currently attempting to sell.

Indian Summer Racing has acquired an Audi RS3 LMS Club Sport and has moved Travis Washay up from the TCB class.  There will be a substantial difference between the Audi and the MINI Washay has been racing for the past couple of years.