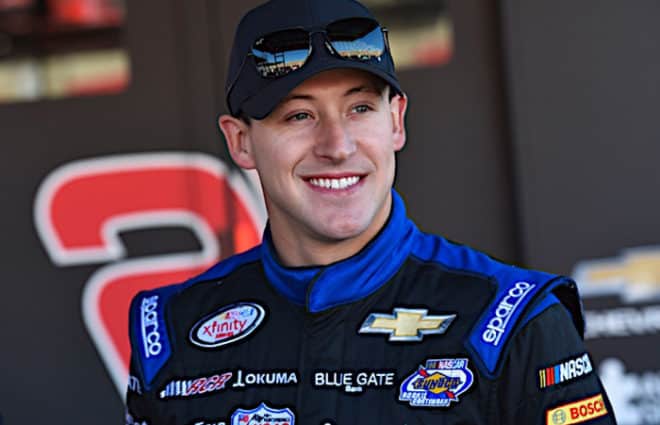 2017 marked a new beginning for Daniel Hemric by making the jump to the XFINITY Series after spending the last two seasons competing in the Camping World Truck Series for Brad Keselowski Racing. It’s been worth the wait.

Hemric, 26, is the oldest of the core of rookie drivers in the XFINITY Series. Through the first 20 events of the season, the North Carolina native has gotten off to a hot start with Richard Childress Racing.

Picking up a stage victory at Bristol Motor Speedway and winning the pole at Richmond Raceway the following week, Hemric accomplished quite a bit more than all XFINITY drivers in the opening eight races.

“We came into with high hopes and wanted to hit the ground running,” Hemric told Frontstretch of his 2017 campaign. “I think for the most part we’ve been able to do that, just the finishes didn’t follow suit with what we were doing on the racetrack. We tried to really focus when we got into race five, six and seven of the year on how to maximize our days.

“We went to Bristol and were able to do that. We did it at Richmond. Then we just went through a string of tough luck where nothing could go right and we’re trying to bounce ourselves out of that right now. I feel like I’m trying to find out exactly what I need to run these races at this length and how to play these stages with my crew chief Danny Stockman.”

In his first 20 career XFINITY Series races, Hemric has picked up a pair of top-five finishes, coming at the aforementioned Bristol and Richmond. The No. 21 car was out front for the opening 26 circuits at Richmond, but then went 10 races without leading a single lap.

As the playoffs linger, Hemric and his RCR team is focused on getting back to where the team was at the beginning of the season. One thing that the rookie driver is excited about is that all of the season’s restrictor plate races are in the rear view mirror, as his best finish at either Daytona International Speedway or Talladega Superspeedway was 31st in the season-opening event. Outside of those trio of races, he has only finished outside the top 20, twice.

“Doing that stuff early in the year—we are a better team now than we were then,” Hemric said. “I feel like I’m doing a better job with my information. I feel like we are doing a better job of building better racecars. My point to that is, we were able to do that earlier this year, there is no reason why we shouldn’t be able to do that now and get better as we go into the playoffs. That’s where our eyes are at. That’s where the our focus is.”

Hemric admits that he has leaned on childhood friends, now teammates, Austin Dillon and Ty Dillon a lot. Sprinkle in Paul Menard and Brendan Gaughan‘s veteran leadership, the rookie has much experience to lean on when he needs advice, especially at tracks he’s going to for the first time.

When those drivers speak, he listens. And a common agreement among is RCR needs to improve its program, especially since moving to five full-time XFINITY cars.

“Hearing those guys say that, it doesn’t soften up my approach, but it allows me to slow down on maybe getting frustrated with the situation,” he elaborated. “We’re all doing what we can do to build the best racecars we can and I’ve still got to do a better job myself putting the races together. I feel like we have some work to do in order to compete inside the top five every single week.

“Having that many cars can be a burden. You get that many people with input, it can be a bit confusing. It’s knowing how to process what somebody is giving you and knowing how to take it. Sometimes, it’s funny how we can all have the same racecars, but have two totally different explanations of what’s happening.”

Along with Hemric’s two top-five finishes, he has put the No. 21 machine inside the top 10 on eight separate occasions, including three of the past five races. With six races to go until the playoffs begin at Kentucky Speedway, he is the lone RCR driver who is all-but-guaranteed a postseason birth, sitting fifth in the point standings, 173 markers above 13th-place Ryan Sieg.

Though Hemric’s primary focus is competing for victories in the XFINITY Series, he can’t help but look toward the future. Even though just a few short years ago, he didn’t know if he would ever get an opportunity in NASCAR.

“Probably between [age] 20 and 23, I decided I was going to short track race the rest of my life and never thought I would have this opportunity,” Hemric said. “To get this opportunity to come here and race on this stage is something I never could have dreamed of. To be able to do it and show people where I came from building my own racecars and kind of running the show from time-to-time to being here and having all these people around you is pretty special.”

If the playoffs began today, Hemric would take his one playoff point, awarded to him at Bristol into the fifth position on the grid. The No. 21 would be seeded behind William Byron, Justin Allgaier and Ryan Reed, all of whom have race victories. Elliott Sadler has picked up five stage victories and would be slotted in just ahead of Hemric.

Dustin joined the Frontstretch team at the beginning of the 2016 season. 2020 marks his sixth full-time season covering the sport that he grew up loving. His dream was to one day be a NASCAR journalist, thus why he attended Ithaca College (Class of 2018) to earn a journalism degree. Since the ripe age of four, he knew he wanted to be a storyteller.
@@DustinAlbino
Previous Nitro Shots: NHRA Does Some Things Right, Some Things Wrong
Next Truckin’ Thursdays: 6 Drivers Battling For 3 Remaining Playoff Spots