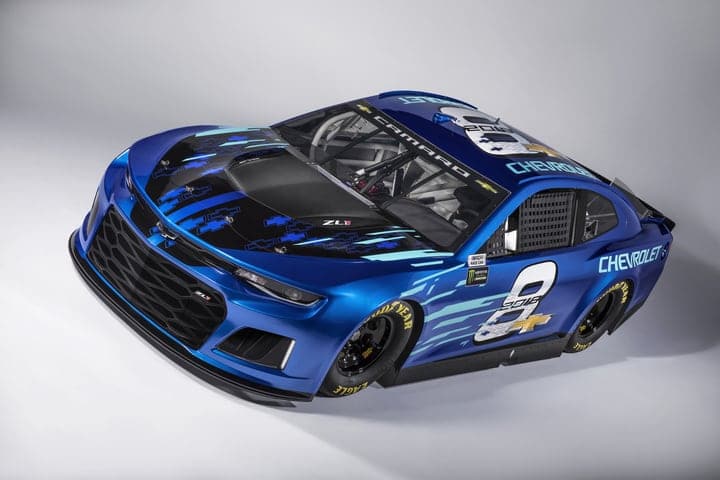 On Thursday afternoon, Chevrolet officially unveiled the Camaro ZL1 as their newest Monster Energy NASCAR Cup Series car at the Renaissance Center in Detroit.  The Camaro ZL1 replaces the the Australian-built Chevrolet SS, which is no longer being produced.

Jim Campbell, General Motors’ vice president of Performance Vehicles and Motorsports, is jazzed to race the Camaro in Cup in 2018.

“Racers have long relied on Camaro to win races and championships in amateur and professional sports car and drag racing, as well as the NASCAR XFINITY Series,” said Jim Campbell, General Motors’ vice president of Performance Vehicles and Motorsports.  “We look forward to racing the Camaro ZL1 in the premier Monster Energy NASCAR Cup Series.”

In 2018, the ZL1 will be the second variant of the Camaro in NASCAR.  XFINITY Series Chevrolet teams have raced the Camaro SS since 2013.  There is no word as to whether XFINITY teams would also switch to a ZL1 next season.

The Camaro has never been officially approved to compete in the Monster Energy NASCAR Cup Series.  For years, the car was actually considered to be too small to race in the series.  When the original Camaros were produced in the late 1960s, those cars raced in NASCAR’s Grand American Series.  In 1971, NASCAR allowed Grand American cars to enter Grand National races when the abandonment of factory support resulted in low car counts.  That is the only previous time in the history of the Cup Series that a Camaro could race.  Controversially, in NASCAR’s eyes, results gathered by drivers in Grand American cars during Grand National races do not count as Grand National statistics.

In NASCAR, likely the best known use of Camaros prior to 2013 was in their late model series (Southwest Tour, Northwest Tour, All-Pro) in the 1980s and 1990s.  In addition, Camaros were used as the base for superspeedway Modifieds that raced in the 1970s and 1980s.

Outside of NASCAR, Camaros have a long history of competitiveness in series such as Trans-Am and IMSA’s GTO class in the 1970s and 1980s.  They were also popular choices for late models in non-NASCAR sanctioned late model series (ASA, ARTGO, etc.).

The new Camaro ZL1 for the Monster Energy NASCAR Cup Series will not be the only racing version of the ZL1 out there.  The Camaro GT4.R that currently competes in the IMSA Continental Tire SportsCar Challenge’s Grand Sport class and Pirelli World Challenge’s GTS class is also based on the ZL1.

Man those Camero decals really make that car look like a Camaro…..hahahahaha

And it will crumple if someone sneezes in its general direction. I am so sick of these pussy cars that are damaged with the slightest bit of contact!

Like the current Xfinity cars it will look great from the front, but the side view is just butt ugly. Just obviously a standard nascar body they stuck a Camaro nose on. Ho hum.

Looks pretty bad ass. With the sport needing to appeal to youth, the manufacturers should focus on promoting muscle/sports cars in NASCAR, not family sedans. Detroit hasn’t made a cool sedan since the 70s Oil Crisis. No kid today dreams of growing up to own a Ford Fusion or Toyota Camry. With car culture dying among youth, your not going to lure them back with with your average family car.

Yeah, from the hood pins forward, that’s one intimidating mother. Not that I disagree with most of your comments about what cars look like today.

DoninAjax
Reply to  Brian in PDX

Will Ford now want the Mustang to be a Cup car now? Also will MOPAR get back in with the Challenger?
How about a Cadillac ATS?

What will it look like when Brian gets through with it trying to get through inspection with the one-template rules?