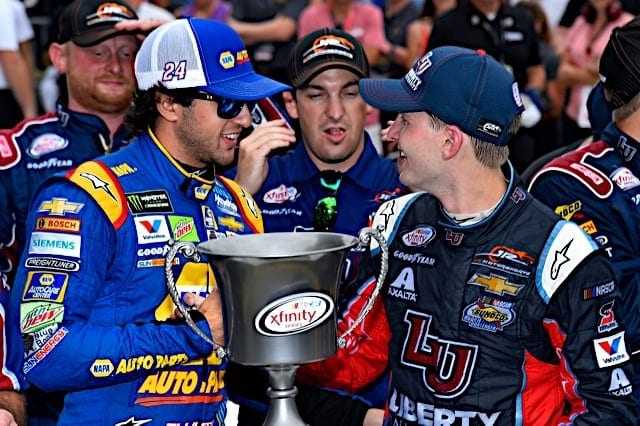 Is William Byron being rushed to the Monster Energy NASCAR Cup Series too quickly?

Nah. In fact, be surprised it didn’t happen sooner.

Think about it this way: Byron, 19, comes as one of the hottest prospects in recent memory in NASCAR’s national series. He’s seemingly been well-funded, with Liberty University — the college Byron attends — sponsoring his efforts since before he entered NASCAR. He’s backed it all up with a heaping helping of wins, stretching from the K&N Pro Series East to, most recently, the XFINITY Series. Few were shocked when earlier this week he was announced as the full-time driver of Hendrick Motorsports’ No. 5 in the Cup Series for 2018, replacing Kasey Kahne.

And yet, Byron’s Cup debut, as it stands, will come in 2018 with the Daytona 500, the opening race of the Cup season. This may change if Hendrick decides to field a fifth car for the rookie to get his feet wet in the series (or if some other scenario getting Byron into a Cup seat occurs before the end of 2017), but if that didn’t happen, it wouldn’t be shocking. Daniel Suarez, for instance, made his Cup debut at Daytona International Speedway last February, and Erik Jones, currently in his rookie campaign like Suarez, was competing in his first event since 2015 in that race.

Even if Byron ends up in a Cup race before the end of the year, he’d be far from the driver to be rushed up to the Cup level the quickest. He made his national series debut at the end of 2015 in the Camping World Truck Series, finishing 31st at Phoenix International Raceway after an early-race wreck. In 2016, ran the full Truck schedule only. Should he make his debut in 2017, that leaves a full season in between his first national series race and his Cup debut.

And that’s not necessarily something that always happens in NASCAR.

Think, for instance, Joey Logano. The 18-year-old, deemed Sliced Bread by many in his first major NASCAR campaign, started his first race in 2008 a little less than midway through the XFINITY season before running three Cup races toward the end of 2008. He was a full-time Cup driver by the next year.

Ryan Newman, back in 2000, underwent a similar transition, except his very first national series event was actually a Cup race, competing at Phoenix at the end of the year  in anticipation of a lengthened schedule in the top two series in 2001 and a full-time effort in 2002. That same year, Kurt Busch, like Logano, started in one of the lower series — the Truck Series, in his case — before making a Cup debut later in the year. Paul Menard ran races in all three national series in 2003 to get his start.

And then there are the drivers who made a Cup debut in the season following their first national series race. Kyle Larson, Denny Hamlin, Clint Bowyer, Trevor Bayne, Michael McDowell, AJ Allmendinger, Cole Whitt, Corey LaJoie, Reed Sorenson — all of these either full-time or nearly full-time Cup drivers came to the series in the year following their first start in either the XFINITY or Truck series.

Point is, Byron has followed a similar trajectory as many of today’s Cup stars in making his way to the pinnacle of the NASCAR world. And unlike many of his predecessors, he’ll have had two full-time seasons in lower series under his belt rather than leaping into Cup without a handle on competing full NASCAR schedules.

But wait, what about time between first national series start and full-time Cup season?

Byron still isn’t among the quickest.  Busch, Logano, McDowell and Allmendinger popped in a year after their national debut, and while the latter two may never have produced on the level of the former, they weren’t exactly in the top-notch rides Busch and Logano were and Byron will be. When expanding to two seasons (Byron’s total), you get guys like Larson, Hamlin, Bowyer, so on and so forth — again, drivers who are doing just fine, and some of whom were strong competitors right out of the gate.

Is it worthwhile to expect great things out of Byron in his first Cup season? Maybe not. It seems like it usually takes a half-season or more for some young drivers of his ilk to get acclimated to the Cup level and producing on a weekly basis.

But that doesn’t mean Byron’s getting rushed. If anything, it slots him more in line with what’s become the norm, what’s familiar.

And yeah, maybe he could have benefited from another XFINITY season, especially if he doesn’t end up the champion in 2017. Shades of Chase Elliott, who also went from a JR Motorsports XFINITY ride into a Hendrick Cup seat.

Still, with a season like the one he’s been having — three wins, seven top fives and 14 top 10s — and an open ride at one of the sport’s premier teams, you can hardly blame any party involved for wanting to move on this now.

How many articles will it take before the milk runs out on this cow?

My guess is many, many articles. There are still 6 months before the 2018 season starts. I’m thinking the milk will be long gone and there will be nothing but air coming out of that cow.

Yup. They’ll be able to draw it out by playing it both ways. If he’s strong out of the gate it’ll be, “see, we told you he’s awesome, hater.” If he struggles it’ll be, “the guy’s a rookie. Lay off, hater.”

There’s your Daytona 500 polesitter, too, based upon the “feelgood stories” of the last several seasons.

I never thought of that but unless a better story comes along between now and then, you are probably right.

The only better one for Brian would be Danica coming back! Be prepared! Brian should always have a backup plan, like Chicken George.

I’m a dairy man and even my cows thought that was a good one!

On a more worthwhile subject. for us old timers who know a good singer when They hear one, I have a treat.

Before Shania there was Carroll!