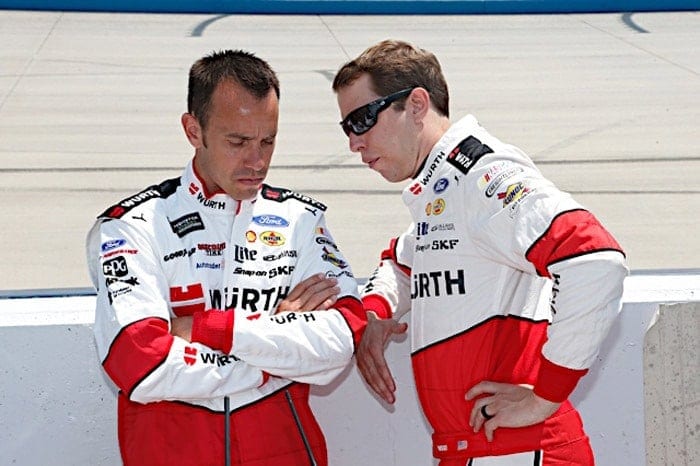 Ryan Blaney’s Ford was so fast on Friday evening’s (Aug. 11) qualifying for the Pure Michigan 400 at Michigan International Speedway that the only person that could beat him was himself; and that is exactly what he did.

Blaney led the first practice on Friday and dominated the first two rounds of qualifying. In the final round, Blaney had good speed heading into turn one of his lap, but had a huge wiggle in the center of the corner that slowed him to a speed of 201.235 MPH and a 12th-place qualifying effort.

“I just got loose over there,” Blaney said. “You lose time in one corner and you can’t make it up. I’m proud of the first two rounds. We didn’t tighten up for the last round. We have good speed in our car. Hopefully, we should be able to drive up through everybody in the race.”

Future Team Penske teammate Brad Keselowski (203.097 mph) took advantage of Blaney’s mistake and grabbed the Pole Award for the race at his home track for the first time in his career. It is the 2012 champion’s 14th career pole.

Keselowski was almost eliminated at the end of Round 2, when a second attempt in the round saw the No. 2 Ford improve its lap time and finish the round in second place.

“Paul Wolfe and my team, they kept dialing in on the car and kept working on it,” Keselowski said. “I’ve got goosebumps. It feels really good to run well here at Michigan. This is my home track. A lot of fans here. I have to put my glasses on so nobody can see me. Really cool. Really special.”

Matt Kenseth (202.577 mph) was the fastest Toyota in fourth position and Chase Elliott (202.429 mph) was the quickest Chevrolet in fifth.

The Monster Energy NASCAR Cup Series drivers will have two practice sessions on Saturday, Aug. 12. The first will start at 8:30 a.m./e.t. and will air on CNBC. The second session begins at 11:30 a.m./e.t. and can be streamed on the NBC Sports App.

The Pure Michigan 400 is scheduled for Sunday, Aug. 13 at 3 p.m./e.t. The race will air on NBC Sports Network and the Motor Racing Network.

MAYBE we might get to see Ryan passing cars on his way to the lead!

On second thought, probably not.

Fords are the top three. Guess who gets penalties during Brian’s event?