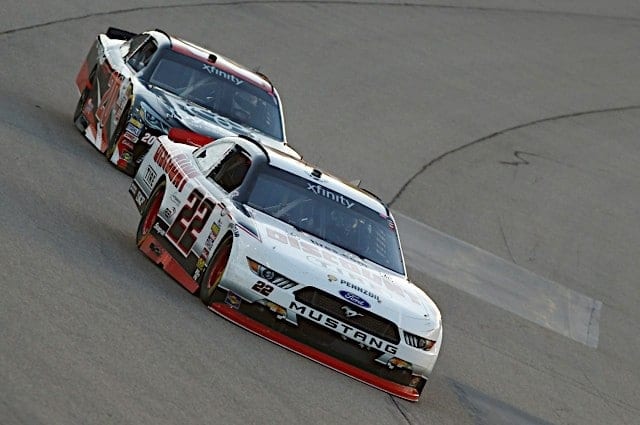 On Saturday morning, Team Penske’s Sam Hornish Jr. was fastest in the sole practice session for the Mid-Ohio Challenge at Mid-Ohio Sports Car Course.  Friday was originally scheduled to have two practice sessions, but they were both washed out by heavy rains and a threat of lightning.

Hornish’s lap of 85.695 seconds (94.857 mph) was a mere one-hundredth of a second faster than James Davison in Joe Gibbs Racing’s No. 20.   Davison’s pace came despite a spin into the tire barrier in the Carousel.  The car was not significantly damaged.

Richard Childress Racing’s Daniel Hemric was the fastest Chevrolet in sixth, nearly a half-second off of Hornish’s pace.  Elliott Sadler was seventh fastest, followed by Blake Koch and Justin Allgaier.  JD Motorsports’ Ross Chastain was 10th.  The top 10 were separated by just over three-quarters of a second.  It is unclear which teams actually made qualifying runs and which teams focused on race runs.

IMSA WeatherTech SportsCar Championship regular Andy Lally was 11th quickest in his SS-Green Light Racing Chevrolet.  According to Lally on Twitter, his team did not make a qualifying run.  As it stands, he was a little over nine-tenths of a second off of Hornish.

The session was ultimately cut short by a huge crash for Casey Mears.  Mears lost a right rear brake line and flew off-course at the Keyhole, hitting the tire barriers head-on.

This is the result of @CJMearsGang car propelling itself into the wall head on… pic.twitter.com/rlr3l3AREr

As you can see, Mears’ GEICO Military Ford was heavily damaged.  Mears walked away from the crash, but he will have to qualify in a backup car with no laps on it.

In the 45-minute session, three drivers turned in 12 laps, tops overall.  They were Hemric, teammate Brandon Jones and Anthony Kumpen.  As noted above, Hemric was sixth quickest.  Jones was 16th fastest, while Kumpen was 32nd.

Three drivers did not set times during the session.  They were Jeremy Clements, Stephen Young and Morgan Shepherd.  Despite not turning in times, Young and Clements still had exciting sessions.  On his out lap, Young was spun in turn 9 by Cody Ware.  On his first lap at speed, Young and Clements came together in turn 5, damaging both cars.

Qualifying for the Mid-Ohio Challenge is set for Noon EDT.  The session will be aired live on CNBC.