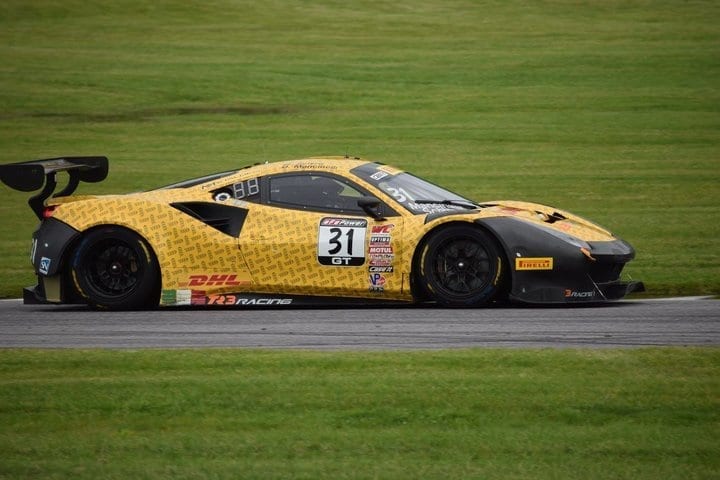 After Daniel Mancinelli was quickest in the morning, TR3 Racing’s Niccolò Schiro usurped him by turning in the fastest lap of the day in the afternoon.  Schirò’s lap of 108.696 seconds (100.946 mph) was eight-hundredths of a second faster than what Mancinelli could do.

Afterwards, Schirò talked about how much he likes Utah Motorsport Campus.

“I really like the track and I enjoy driving on it because it’s very European style,” Schirò told Pirelli World Challenge representatives.  “It’s not too close to any walls and that makes it easier for first-time drivers to learn the track. The car is feeling better session by session and we’re working with the engineers and improving something every time by trying many different settings. Sprint racing is very different for me. I like the American races and I’m happy to be back here. I enjoy driving with Daniel [Mancinelli] since we work well together.”

Schirò’s lap in the session was two-tenths of a second faster than Cadillac Racing’s Ricky Taylor.  Absolute Racing’s Vincent Abril was third quickest, followed by the No. 93 RealTime Racing Acura of Peter Kox.  The CRP Racing Mercedes for Ryan Dalziel and Daniel Morad was fifth.

In GT Pro-Am, Always Evolving Racing’s No. 75 Nissan shared by Frankie Montecalvo and Ricardo Sanchez was fastest with a lap of 109.574 seconds (100.137 mph).  That lap (good enough for 10th overall) was nearly three-quarters of a second faster than Magnus Racing’s No. 44 Audi for John Potter and Marco Seefried.  GMG Racing/Calvert Dynamics’ No. 77 Porsche for Dr. Preston Calvert and Alec Udell was third quickest.

GT Am-Am was led by NGT Motorsport’s Jonathan Ziegelman with a lap of 111.667 seconds (98.260 mph), good for 20th overall.  Ziegelman’s lap was four-tenths of a second faster than R. Ferri Motorsport’s Drew Regitz and Kris Wilson.

GT Cup saw Dream Racing Motorsport’s Lamborghini for Alessandro Bressan and Yuki Harata fastest with a lap of 114.581 seconds (95.761 seconds).  The lap was more than a second faster than Erich Joiner and Andy Lee in the Tool Racing Porsche.  In GTS, the NOLAsport Porsche Cayman GT4 Clubsport MR of Jason Hart and Matt Travis was fastest.