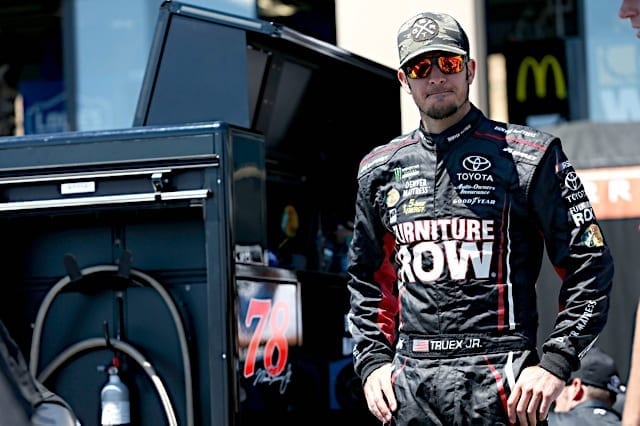 Kyle Larson might have won the Pure Michigan 400 at Michigan International Speedway, but it was Martin Truex Jr.’s race to lose, and he lost it.

Larson only led the final two laps of the event on Sunday afternoon, grabbing the lead from Truex on the overtime restart.

Larson restarted in fourth-place. Matt Kenseth and he both had better restarts than the front row of Truex and his Furniture Row Racing teammate Erik Jones. The No. 42 car stuck its nose in the third lane, inside of Truex, and Kenseth went lower than Jones. Larson emerged from Turn 2 with the biggest run of the four and left the rest of the field in the dust.

“We got beat, fair and square,” Truex said. “That’s just the way it goes sometimes…I screwed up, he [Larson] took advantage.”

Truex finished the race in second-place and Jones took the last step on the podium, tying his career-best result. Jones was the highest finishing rookie in the race, but knows he saw his first Monster Energy NASCAR Cup Series win slip away at his home track.

“It was looking like a Furniture Row one-two kind of either way it was going to play out,” Jones said. “Just didn’t work out the way we wanted it to…We got that red flag, and it gives you a lot of time to at least play through different scenarios on the restart and how you want it to work out. It’s very rare it actually works out the way you picture in your head, but yeah, you definitely ponder what that would be like.”

The Furniture Row Racing Toyotas were fast out of the gate, finishing fourth and fifth in the first stage, but had nothing for Brad Keselowski at the start.

Keselowski dominated Stage 1, leading 56 of the 60 laps, only losing the lead during a green flag pit cycle. Truex and Jones gained on Keselowski for Stage 2, but still needed the track position to carch the No. 2 car.

Truex had a loose wheel and pitted with 15 laps left in the second stage, which started a cycle of green flag stops.

Keselowski waited several laps before pitting himself and the result was the No. 2 team losing track position and coming out in fourth place, with Truex, Daniel Suarez and Kevin Harvick ahead of him.

Keselowski tracked down Harvick and Suarez to get around them for second place, but Truex held on for the Stage 2 win. It was Truex’s 15th stage victory of the season.

Truex and Keselowski raced side-by-side for a few laps on the restart, with Truex hanging on to the lead.

On lap 139, a caution flew when Suarez wiggled, allowing Kasey Kahne to get a run underneath. Kahne slid up into Suarez, causing Kahne to spin into the wall and back into Suarez. The No. 19 car then hit the inside wall and both cars were done for the day.

Keselowski took advantage of the yellow flag to come down and take four tires, while Truex, Jones and seven other cars stayed out.

Truex and Jones broke away from the rest of the field on the ensuing restart, but Jones stayed fairly close to the No. 78’s bumper. Keselowski restarted in 10th and stalled out in seventh place.

With 40 laps to go, the leaders hit pit road for four tires and fuel, while Keselowski retook the lead by staying out.

When Keselowski was unable to lap Truex by staying out, crew chief Paul Wolfe called his driver to pit a few laps later and Keselowski was not a threat afterwards.

A debris caution came out with 14 laps left with Kyle Busch and seven other cars still in front of Truex and needing to pit. Most of the lead lap cars pitted, but not Truex, Jones, Kenseth and Chase Elliott.

Truex and Jones took off on the second to last restart and seemed destined for the one-two, but fate, and an excellent restart from Larson, proved otherwise.

The No. 78 team is still in phenomenal shape for the upcoming playoffs, having wracked up a berth and 35 playoff points already. The MIS win would have meant a playoff spot for Jones, who is stuck on the outside looking in with three races left before the cutoff.

Should the two cars be racing each other for a win in the next three races, do no count on Truex cutting his teammate any slack when the race win is on the line.

“We don’t have team orders,” Truex said. “Nobody lets each other win. He’s going to win some races. His turn will come.”

Regardless of how the finish played out, it seems that the FRR Toyotas are not sandbagging, despite Keselowski’s comments after winning the pole on Friday, and they will be two of the biggest threats down the road.