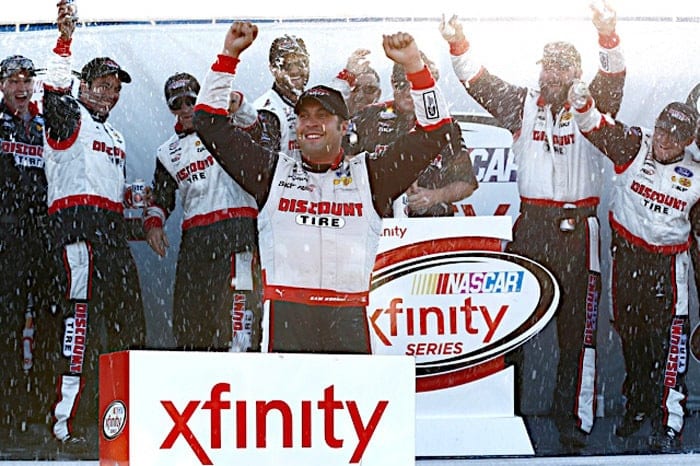 Monster Energy NASCAR Cup Series: Michigan a Welcome Back for Multiple Drivers – Sunday’s Pure Michigan 400 may have been a return to Victory Lane for Kyle Larson, but Michigan International Speedway gave several other drivers a warm welcome back to the front after 202 laps.

Starting with one on the podium, Erik Jones tied his best Monster Energy NASCAR Cup Series finish, coming home third behind teammate Martin Truex Jr. He capped off what was Furniture Row Racing’s best overall race of the season, with both cars in the top three.

Ryan Newman restarted eighth with two laps to go and jumped up to fourth after Matt Kenseth had a tire go down in the bottom lane. The finish is Newman’s fifth top-five finish of the season, tying his most since 2013, his last season with Stewart-Haas Racing.

Trevor Bayne earned a top five for the first time in 2017, using strategy to get into the top half-dozen, and a strong restart to stay there.

Chris Buescher continues a momentous month of August, finishing sixth, his fourth top-12 finish in the last seven races and his best Cup result in nearly a year.

The feel-good results continued with Austin Dillon in seventh, his first top-10 finish since winning the Coca-Cola 600 in May. Aric Almirola gabbed his best finish since his return to the sport in July, finishing 12th.

Larson may have a shiny trophy to show for it, but many exit the Irish Hills with a bright smile. Perhaps well-timed, as we head to Bristol Motor Speedway in less than a week. – Zach Catanzareti

XFINITY Series: Sam Hornish Jr. Gets Back to Victory Lane, Andy Lally Steals the Show – Whenever there is a standalone road course race in either the XFINITY Series or the Truck Series, it’s bound to be a great event. This weekend was no different.

Sure, Sam Hornish Jr. dominated, leading 61 of 75 laps, but the racing was superb. Bumping, banging and paint-swapping filled the action-packed event at Mid-Ohio Sports Car Course. The No. 22 team went to Victory Lane for the second time this season, and it was the Ohio native’s first victory since winning with Joe Gibbs Racing last June at Iowa Speedway.

Hornish has had two full-time opportunities in the Cup Series, but damn, this guy deserves a full ride in at least the XFINITY series. Time is not on the side of the 38-year-old, but he’s awfully competitive and could turn his story into what Elliott Sadler has done in rebuilding multiple teams at the XFINITY level.

Road course ringers were out in full force on Saturday, three of them finishing in the top 10. 2011 Cup Series rookie of the year Andy Lally started from 13th, but quickly made his way to the top 10 before pitting prior to the end of stage 1. After that, he put on a show.

The No. 07 team pitted with less than 30 laps to go, and during the caution-filled final stage, Lally made his way up to as high as fourth, before finishing fifth. It’s his first-career top-five finish in the three national touring divisions of NASCAR.

Prior to the fifth-place finish, the No. 07 team, owned by Bobby Dotter, had a season-high finish of 12th at Daytona, driven by Ray Black Jr. – Dustin Albino

Camping World Truck Series: Bubba Wallace Impresses at Michigan – When Kyle Busch is enters in a Truck Series race, no one actually thinks another driver will come out on top. However, Darrell Wallace Jr. thought otherwise Saturday afternoon at Michigan.

The former Roush Fenway Racing XFINITY Series driver was jobless until MDM Motorsports gave him a shot at returning to the Truck Series. In Wallace’s first truck start since November 2014, he struggled with a loose truck to start the race. But by Stage 3, the No. 99 machine was up front and ultimately took home the trophy, the first in only the team’s 11th contest.

As Wallace attempts to ride high on momentum off the track from publicity after his first win since 2014, he needs to keep taking advantage of each opportunity he gets. He said multiple times he would pick and choose what offers he would accept, and he made the right decision at Michigan. – Joseph Wolkin

Sports Cars: Tockwith Motorsports’ ELMS Season Ends … Because of a Music Video? – This is not a joke.  On Wednesday, Tockwith Motorsports announced that they will no longer compete in the European Le Mans Series or the FIA World Endurance Championship effective immediately.  In addition, driver Phil Hanson has parted ways with the organization.

Why did this happen?  A contract breach.  Tockwith Motorsports allowed the usage of an Audi R8 LMS Ultra that Hanson and his family own in the music video for English rapper Honey G’s “Hit You With The Honey G.”  They did not obtain permission from the Hansons prior to the video being shot.

Yes, it is a very bad music video starring a former contestant on the United Kingdom’s version of The X Factor.  However, there is a moral here that has nothing to do with the 36-year old rapper.  If you have something that doesn’t belong to you, you cannot do whatever you want with it.

Prior to the withdrawal, Hanson and Nigel Moore were 12th in ELMS LMP2 points.  Their best finish was a fifth in the season opening 4 Hours of Silverstone in April.  Their only classified finish in the WEC was 10th in class (of 25) in the 24 Hours of Le Mans in June.  – Phil Allaway

Tom B
Reply to  Lynne