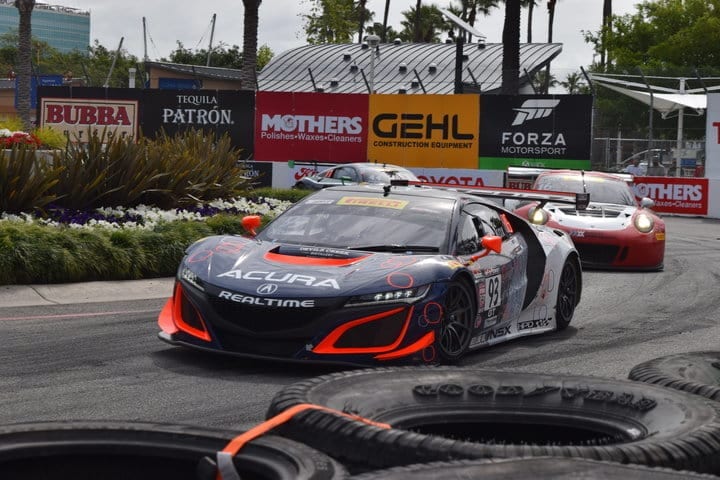 On Saturday afternoon, RealTime Racing’s Peter Kox and Mark Wilkins claimed overall victory in Sprint-X race No. 1 at Utah Motorsports Campus.  It is the first victory in Pirelli World Challenge for the Acura NSX GT3.

Wilkins was happy to be able to hold on for the triumph.

“I have a love-hate relationship with this track,” Wilkins told reporters after the race.  “Peter [Cunningham] and RealTime Racing have done a great job with this car all weekend. Throughout the season we’ve just been developing it. We’re plugging away at it, one race at a time. It helped that we had the right track position. I was a little bit nervous hopping in there with the pressure to keep it up front.  I just focused forward and I had a great car to do that. So, thanks to RealTime for that and we’ll just try to keep it up tomorrow. It’s a great win for the Acura NSX and the team and I really enjoy working with these guys.”

While the duo did start the race on pole, they were the beneficiaries of trouble during the race.

Early on, TR3 Racing’s Daniel Mancinelli took the lead away from Kox and made use of his excellent pace from Friday to pull away.  The pit stop and driver changes went well.  Niccolò Schiro was given a five-second lead over Wilkins.

However, an unenforced error changed the entire complexion of the race.  Schirò spun out on his own in the Windup turn with 18 minutes to go.  Wilkins simply had to avoid the stricken Ferrari in order to take the overall lead.

Despite the spin, Schirò was still faster than Wilkins and proceeded to run the No. 93 Acura down quickly.  Wilkins spent the final 10 minutes fighting off everything that Schirò could throw at him.  In the last turn, Wilkins got a little loose, allowing Schirò to get to the inside on exit.  However, Wilkins was able to outdrag Schirò to the line.

While Schiro did not pick up the win, Mancinelli did turn in the fastest lap of the race.  As a result, Schirò will start on the overall pole for Sunday’s race No. 2.

In Pro-Am, Always Evolving Racing/AIM Autosport’s Frankie Montecalvo led early from the class pole.  Unfortunately for GT-R fans, Montecalvo cut a left rear tire.  That put the team out of contention (they would eventually finish at the back of the class).  Montecalvo’s puncture resulted in the class coming down to a battle between GMG Racing’s No. 14 Porsche and Wright Motorsports’ No. 16 Porsche.

Ultimately, Wright Motorsports’ Michael Schein and Jan Heylen took the Pro-Am win in 11th overall.  Mathieu Jaminet and James Sofronas were 1.123 seconds back in second.  Magnus Racing’s John Potter and Marco Seefried were third in the No. 44 Audi.

Results of Pirelli World Challenge at Utah Sprint-X Race No. 1

Sprint-X Race No. 2 at Utah Motorsports Campus is scheduled to go green at 2:20 p.m. EDT.  It will be streamed live at World-Challenge.com and on the subscription service Motor Trend OnDemand.