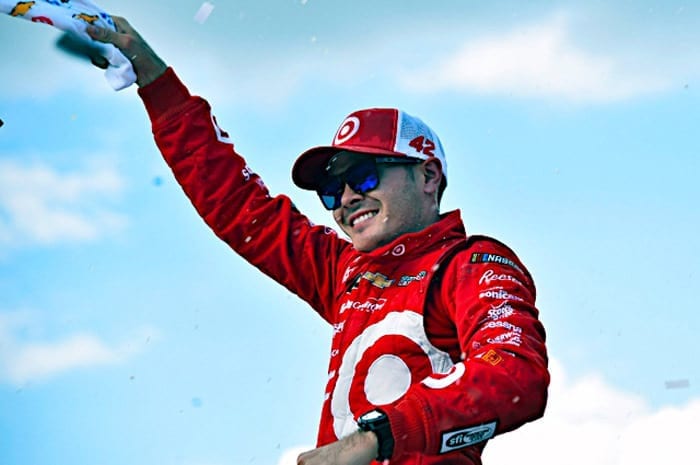 The Pure Michigan 400 will be remembered by Kyle Larson‘s winning restart and Martin Truex Jr.‘s dominance before choking. Rookie Erik Jones managed to turn in a solid day. Jones tied his career-best with a third-place finish and was a serious contender for the victory. Not too bad for a rookie.

Had Jones not spun his tires on the final restart like his Truex did and had Matt Kenseth not leaped ahead on that restart, then Jones very well could have picked up his first win at his home track of Michigan International Speedway.

The No. 77 team seems to be catching up to its team car, and leaving Joe Gibbs Racing further behind. If this trend keeps up, then Jones is going to be sad to leave Furniture Row Racing at the end of the year.

Where… did the defending race winner end up?

Larson won his third race in a row at MIS and his fourth race in a row on a track of two miles in length. Is it too early to label him as the “King of the Two-Milers?”

The 2017 Pure Michigan 400 champion is the third driver in Monster Energy NASCAR Cup Series history to win three races in a row at Michigan. The other two are NASCAR Hall of Fame members David Pearson and Bill Elliott; that is some pretty good company.

What… happened to Brad Keselowski?

Brad Keselowski won the pole for the race and absolutely dominated the early portions of it. He won stage 1, leading 56 of the 60 laps.

The Michigan native led the race five times for a total of 105 laps of the 202 lap contest. Yet Keselowski failed to win for the first time at his home track and finished in a disappointing 17th position.

It is safe to assume that Keselowski greatly benefited from clean air in the first half of the race. During a sequence of green-flag pit stops, Keselowski pitted a few laps later than Truex and lost the lead. Once he was back in dirty air, Keselowski could not pass Truex and the handling seemed to completely go away on the No. 2 machine.

Either that, or he was sandbagging.

Late-race cautions and restarts were the two things that define a good deal of the winner during the 2017 season. Larson did not have a shot at winning until the final restart, but he made it happen when the pay window opened.

Larson showed nerves of steel as he dove into Turn 1 during overtime at MIS. He somehow put his car in a hole that did not appear to exist and came out of the pair of corners with the lead.

Was… it a good race?

The final restart of the race was one for the ages, and there were a few other entertaining moments in the Pure Michigan 400. However, the racing was awful compared to the thriller that the Camping World Truck Series put on the day before.

The bottom line is that clean air continues to be a problem in the Cup Series, where as it was all about the draft in the truck race. Once someone gets the lead on a restart in Cup, they will be leader unless something happens to them or another caution comes out. In the CWTS race at Michigan, drivers wanted to remain in second place until it was go time.

Cup needs to use the aero ducts that the XFINITY Series used at Indianapolis Motor Speedway sooner than later.

Will… there be any new winners between now and the start of the playoffs?

Joey Logano and Clint Bowyer do not seem that they will be able to win to get in. Both drivers struggled tremendously at MIS and lost any momentum they had gained in recent weeks.

Rookies Jones and Daniel Suarez are the drivers that could shake things up and make fellow Toyota driver Kenseth sweat it out. Suarez needs a few more solid runs before I would consider him a race-win contender, but Jones could get it done. The playoffs could very well emulate real life with Jones bumping Kenseth out.