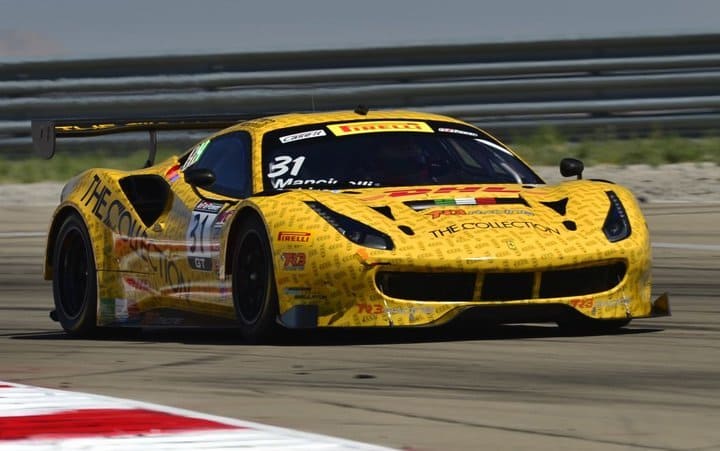 On Sunday afternoon, TR3 Racing’s Daniel Mancinelli and Niccolo Schiró showed that their pace in practice was no fluke.  Schirò took advantage of the pole and drove away from the pack.  A series of cautions kept everyone close, but Mancinelli was able to hold on to give TR3 Racing the overall win in Sprint-X Race No. 2 at Utah Motorsports Campus.

Mancinelli was very pleased with his form while racing for the win.

“At the second caution, the Acura was on my exhaust and [Ryan Eversley] tried to pass because they were so good in the straights but I closed the door,” Mancinelli said after the race.  “[Eversley] tried to get on the inside and I went outside, then the next corner, he was right next to me but left me proper racing room.  From there, I put in two laps that were fast like qualifying laps and that allowed me to take the victory for the team who gave me the car in perfect condition. This circuit is fun because it’s wider than others and you’re able to go two-to-three cars side-by-side and that makes it fun and exciting for the viewers.”

At the start, Schirò was able to dash away from the pack while outside pole sitter Mark Wilkins dropped back quickly.  Unlike Saturday’s win, Sunday saw Wilkins forced to pit just a couple of laps into the race with a puncture.  He would eventually finish 11th.

Schirò drove a very smooth race to open up a gap over RealTime Racing’s Tom Dyer.  Dyer started fifth and quickly moved up to third on the first lap.  That became second when Wilkins had his tire issue.

The mandatory pit stop went swimmingly for TR3 Racing.  The switch from Schirò to Mancinelli was flawless and the team was all but right on the minimum pit time.  Meanwhile, Eversley stalled leaving his pit.  The result was that Mancinelli ended up with an 11-second lead.

That lead was curtailed by a full course caution right after the pit window closed due to Will Stevens stalling his Absolute Racing Bentley on course.  With the field packed back together, Eversley began to mount a charge on Mancinelli.  The Italian GT3 veteran admitted afterwards that he had some trouble keeping the tires clean under the first yellow.

A second full course yellow for David Askew‘s DXDT Racing Merecedes stalling at the Black Rock Hairpin set up a Green-White-Checker.  On the GWC, Mancinelli was able to get a great start and pull away to take the win.

Eversley and Dyer finished a close second, followed by Cadillac Racing’s Michael Cooper and Jordan Taylor.  K-PAX Racing’s Àlvaro Parente and Ben Barnicoat finished fourth thanks to a series of aggressive moves late from the Portuguese McLaren factory racer.  The No. 3 Cadillac of Johnny O’Connell and Ricky Taylor were fifth.

In Pro-Am, Black Swan Racing’s Jeroen Bleekemolen dominated the entire first half of the race.  Starting sixth overall, Bleekemolen quickly moved up to third overall.  The Mercedes was every bit as fast as the other drivers up front.  However, things took a turn for the worse after the driver change.  Tim Pappas dropped back down the order.

That allowed Wright Motorsports’ No. 16 to move up into the class lead with Michael Schein at the wheel.  However, given that the second half of the race was a start-and-stop affair, he only drove three laps at full speed.  Regardless, he was able to hold to take the class victory for Porsche on the track.

However, all during the second half of the race, the No. 16 Porsche was under investigation by officials for violating the minimum pit lane delta time.  For Pro-Am teams, that minimum time in the pit lane is 90 seconds.  The No. 16 was found to have spent just over 83 seconds in the pit lane, which is an infraction.  As a result, Pirelli World Challenge officials slapped the No. 16 Porsche with a 32-second penalty.  The specific time was equal to what a pass-through penalty would have cost him.  As a result, the No. 16 of Schein and Jan Heylen dropped to a sixth-place finish.

Inheriting the win was GMG Racing’s No. 14 Porsche of Mathieu Jaminet and James Sofronas, the team’s second Pro-Am win of the season.  It would actually be the third of the year for GMG Racing, but they were stripped of the Pro-Am win in the first Sprint-X race at VIR due to a post-race time penalty.

Always Evolving Racing/AIM Autosport’s Frankie Montecalvo and Ricardo Sanchez were right behind the No. 14 Porsche in second.  Pappas and Bleekemolen ended up third, followed by Magnus Racing’s John Potter and Marco Seefried in the No. 44 Audi.  GMG Racing’s Dr. Preston Calvert and Alec Udell were fifth.

In GT Am-Am, the day was dominated once again by NGT Motorsport.  Jonathan Ziegelman and Henrique Cisneros led flag-to-flag to sweep the weekend.  It is the fifth win of the year for Cisneros and the second for Ziegelman.  The cautions meant that R. Ferri Motorsports’ Drew Regitz and Kris Wilson were only six-tenths of a second behind at the finish.

Results of Pirelli World Challenge at Utah Sprint-X Race No. 2

Pirelli World Challenge teams are off for the next couple of weeks.  The Sprint-X portion of the season will come to an end at Circuit of the Americas on Labor Day weekend.  There, the teams will make up the second race from Canadian Tire Motorsports Park, which was cancelled due to heavy rains, in addition to two regularly scheduled races.