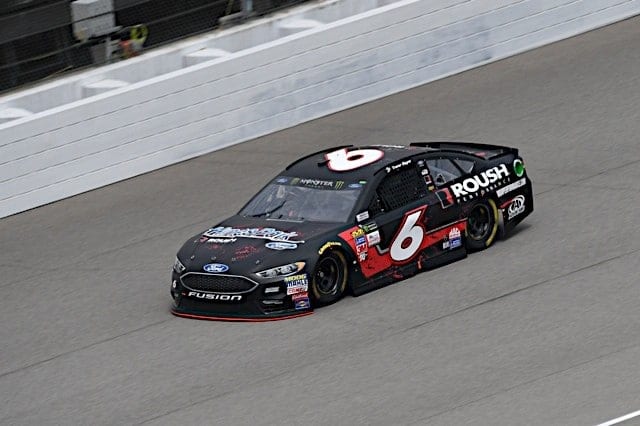 Manufactures take pride in winning the two races each season at Michigan International Speedway almost as much as winning the Daytona 500. It’s a big deal, especially for Ford and Chevrolet, whose headquarters are stationed in Detroit.

Over Jack Roush’s 30-year career as a car owner in the Monster Energy NASCAR Cup Series, he’s been victorious at Michigan 13 separate occasions, seven of which came in the 2000s, nine in the 21st century.

On paper, going into the 23rd race of the 2017 season, Ricky Stenhouse Jr. would have the nod on Trevor Bayne, who could possibly sneak out a victory, after winning twice earlier this season. However, the No. 6 team played the strategy game, hoping to improve on where they were running throughout the event.

Through the first two stages, Bayne scored no stage points, though finishing in the top 20. The No. 6 team, led by crew chief, Matt Puccia, qualified 21st and was stuck in dirty air. A caution for debris off of Joey Logano‘s car with 14 laps to go saved the teams day.

Drivers who had yet to pit during a cycle of green flag pit stops came in for service with 12 laps to go. Taking two tires, Bayne was the first one off the pits, and would restart in fifth, only behind Martin Truex Jr., Erik Jones, Matt Kenseth and Chase Elliott, all of whom were on older rubber.

The green flag flew with less than 10 laps remaining, and Bayne fell to sixth. But when the final caution came out with four laps to go, it put the No. 6 car in the preferred groove on the outside, behind Kyle Larson and Truex.

With the overtime restart, Bayne jumped to third coming off Turn 2, but overshot Turn 3, dropping to fifth. The No. 6 team went on to record its first top-five finish since the July race at Daytona International Speedway in 2016.

“That’s what we needed,” Bayne said of his fifth-place effort. “I got a great restart and pushed the [No.] 42 to the lead. I went for it in turn three and it didn’t stick. It got massive loose and ended up fifth. If I went home thinking I should have gone for it in three, I would be kicking my butt. But it’s a great day for our team. We needed this to recover a little bit.”

After getting off to a rather hot start to 2017, Bayne hasn’t scored a top-10 finish since his 10th-place finish at Kansas Speedway. He also kicked off the season rounding out the top 10 in the Daytona 500. Outside of that, this fifth-place finish is the only other race the No. 6 team has placed inside the top 10.

Dating back to Bayne’s 27th-place finish at Sonoma Raceway toward the end of June, the No. 6 car had seven consecutive finishes of 20th or worse. The recent results dropped the team to 20th in the overall standings, 21st on the playoff grid.

This finish was all about turning the team’s season around.

“We’ve had a tough couple of months not getting the results we thought that we deserved,” Bayne said. “Today, to get a result feels really good. We had fast car early on. We had fuel strategy at the end. I tried to go for it from the top and hit the Speedy Dry, got loose, and came home fifth. Man, when you’re in that position you have to go for it. I wouldn’t have slept good at night if I didn’t stuff it in there and try something. It just didn’t stick. It feels really good for our team.”

With three races remaining until the playoffs begin at Chicagoland Speedway, Bayne is 214 points behind Kenseth for the final position. That means its win or go home for the No. 6 team.

“We’re still not in the Chase yet and we have to keep pushing and making our cars faster and for Ricky’s sake, who is in the Chase,” he said. “We have 13 races left with or without the Chase to go make a statement, win races and run well. It feels good to be in contention. We can’t beat them on raw speed, but we can put ourselves close with fuel strategy, tire strategy and trying to be in the mix in the end. And that feels really good from what we’re used to.”

The series heads to Bristol Motor Speedway next weekend, where Bayne finished fifth in the spring of 2016.