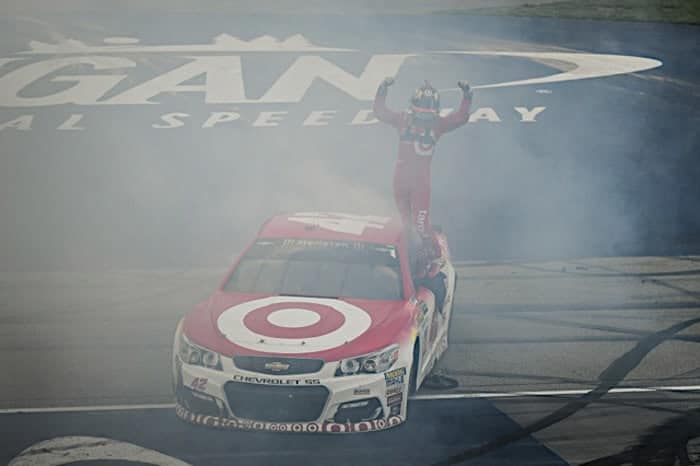 In the days leading up to Sunday’s Monster Energy NASCAR Cup Series race at Michigan International Speedway, there was plenty of chatter about cars, with Chevrolet unveiled its 2018 Camaro, which will compete in the Cup Series beginning next season.

Old rivals Brad Keselowski and Kyle Busch also engaged in a war of words over the weekend.  Keselowski stated that, in his judgement, the Toyota teams had rolled back the horsepower produced by TRD engines in anticipation of an upcoming NASCAR inspection.  Busch responded that TRD was using a different engines package from the last few weeks, and called Keselowski a “moron.”

Insults aside, cars, speed and hullabaloo about manufacturer advantages are nothing new at Michigan.  The two-mile track in the vicinity of Detroit has long been a meeting place for competitors and manufacturer representatives.  Seeing drivers extolling the virtues of their respective operations in the traditional backyard of the American auto industry is part of the game.

The design of the track even lends itself to these discussions.  Strong engine and aerodynamic packages are a must at MIS.  Unlike the more physical style of racing that will be on display at Bristol Motor Speedway next weekend, Michigan is the type of track where most vehicles lack the usual battle scars after a long day of racing.  The drivers keep the cars clean, because the cars usually make the difference.

However, Kyle Larson turned the usual Michigan formula on its ear.  Larson, who had won the previous two Cup Series races at Michigan, appeared to be outclassed by Keselowski, Martin Truex Jr., Erik Jones, and a few others.  Yet an overtime restart provided Larson with one last chance to snare his third win of the season.  Lining up fourth, but second in the outside lane, Larson whipped to the inside of the No. 78 car, at one point going four-wide with Truex, Jones and Matt Kenseth.

Furniture Row Racing Gives One Away at Michigan

The quick maneuvering on the restart allowed Larson to emerge with the lead.  While the two overtime laps were the only ones that he lead all day, the No. 42 car was in front when it mattered most.

The victory brings an end to a minor slump for Larson.  In the previous three races, he had not posted a finish better than 23rd.  Larson’s teammate, Jamie McMurray, had a good day as well.  McMurray’s ninth-place result marked his first top-10 finish since Kentucky Speedway last month, and the No. 1 team holds a 52 point gap above the cut line for the playoffs.  Sunday’s race could wind up being a momentum builder for Chip Ganassi Racing as the postseason approaches.

In light of a potentially big payoff for CGR, it is odd how much Larson flew under the radar this weekend, even as one of the favorites.  While Toyota had a sluggish start to the season, Truex and Busch have been the drivers to beat lately on big, fast, flat tracks.  Then the Team Penske drivers, Keselowski and Joey Logano, came to the Irish Hills and swept the front row in qualifying.  Indeed, Keselowski did not appear to be suffering from any lack of speed during the race.  Likewise, whatever Toyota did or did not do to its engines, Truex was still fast.  Yet Larson, who stayed out of the horsepower fracas entirely, was the one who stole the show.

Sunday’s race turned out to be a great example of why auto racing is different from other sports.  Specifically, the competition revolves around a mix of machines and people.  In racing, equipment and technology influence both the outcome of the game and the way that athletes behave.

Competitors in “stick and ball” sports might have preferences for the brand or style of gear that they use, but those preferences usually are not relevant to how they play the game.  On the other hand, auto racing embraces difference in equipment.  It is expected that not all cars will be equal on a given day, and that the skill of drivers behind the wheel is worth celebrating.

Furthermore, Michigan gave us a glimpse of what happens when there is too much emphasis on the car aspect of racing.  The conflict between Keselowski and Busch no doubt made for some cheap entertainment, and rivalries are certainly an important component of racing.  Additionally, NASCAR drivers complaining about advantages held by other manufacturers goes back to the beginning of the sport.

But these kinds of complaints make the drivers seem like just another tool, another manufactured part that is at the mercy of the car’s performance.  Indeed, they make the driver seem so powerless that the only solution is to go running to NASCAR to get the sanctioning body to intervene.  Not every driver will have the fastest car at his or her disposal all the time, but the greatest drivers believe that they can make up the difference.  Besides, complaints from competitors about other manufacturers’ advantages influenced the design of the Car of Tomorrow, which wound up stifling much of NASCAR’s brand identity.  Careful what you wish for.

At the same time, it is puzzling why some drivers would get so put off by a competitor’s speculation.  If that speculation is incorrect, say so and move on.  Verbal jabs and Twitter debates questioning which teams have an advantage are ultimately sideshow, an exercise in theatrics that diminish the difference that drivers can make.

Hopefully, the manufacturer drama will not overshadow Larson’s big triumph.  While the No. 42 car had the advantage of fresher tires than the No. 78 car, the final restart was clearly a moment in which the driver made the difference.  Larson’s win must serve as a reminder that racing is about man and machine, no matter how many auto executives are watching.

Memo to that pardoned felon Rick Hendrick. Good luck getting that spook Kasey Kahne another ride.

BK is quite articulate and always has an interesting opinion; Kyle Busch, on the other hand, aptly described himself.