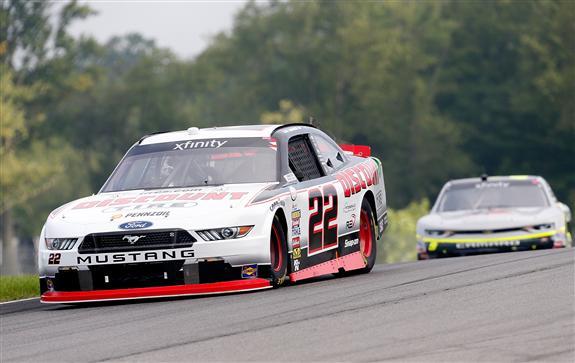 With a crash-filled opening stage, Hornish paced the way until the yellow flag flew with four laps remaining. Greg Erwin, crew chief of the No. 22 team called the Ohio native to pit road, giving up the lead. The move, however, set Hornish up to make just one pit stop for the remainder of the event.

Battling his way back to the lead, Hornish went on to win Stage 2, and in total, paced the field for 61 of 75 circuits. In the final stage, he had his battles, but on a restart with 14 laps to go, the No. 22 car passed Daniel Hemric, and then cruised to his fifth career XFINITY Series victory.

“It’s super important having my family here and a couple friends,” Hornish said of winning at his home racetrack. “This is a place I think I’ve finished second at in about three or four other series. Finally able to get the win, and with the luck that we had in our first two races [both events at Iowa Speedway], I wondered how today was going to turn out, but man, the car has been good ever since we unloaded off the truck. We had a pretty smart, almost flawless day.”

Hornish’s victory is his first-career road course victory in NASCAR. In four of his five career triumphs, the 38-year-old has led more than half the event.

Whenever there is an XFINITY Stand stand alone road course event, it’s bound to bring a bundle of road course ringers. This trend is something that is all but gone in the Cup Series, but the aces of the twist and turns can be competitive and relevant in the top preliminary division.

James Davison was making just his second-career XFINITY start, this time in Joe Gibbs Racing’s No. 20 machine. He started in 11th, and cracked the top five in the first couple of laps. He raced as high as second in the second stage, and finished third. In the final 35 laps, the No. 20 car beat and banged off other machines en route to a fourth-place finish.

Andy Lally charged hard from the back of the field on two different occasions to get his first-career top five finish. In last year’s race at Mid-Ohio, he finished seventh.

Out of the bunch, defending race winner, Justin Marks is the driver who underachieved. Competing in his first XFINITY Series race of the season, the No. 42 had a bad qualifying effort that put him in 21st. The California native hovered around the back half of the top 10 for the majority of the race, earning five stage points in the second stage. In the sprint to the finish, his race took a turn for the worse.

With 18 laps remaining, Regan Smith  got loose in the carousel, and pushed Marks into the grass, spinning the No. 42 out. As Marks geared his car up, he returned in the middle of the field and was smacked by Ryan Reed, ending his day. The No. 42 car came in for repairs and would restart in the 30s.

Starting from 10th position, Brennan Poole was set up to have a solid day, after a disappointing last lap at the first road course of the season. The No. 48 car was spun out while running among the top 10.

Poole proved to be the bull in Saturday’s event at Mid-Ohio. Playing the strategy game that was dealt to him by crew chief Chad Norris, the No. 48 car restarted in third with two laps remaining in the opening stage. Getting a good launch in the restart zone, Poole passed Blake Koch cleanly, lining him up behind race leader Elliott Sadler as the field went into the right hand Turn 2. He decided he wasn’t lifting and dumped the No. 1 car.

He held the lead through the next couple of corners before Koch got by for his second stage victory of the season. Poole finished runner-up after the opening 20 laps. Sadler was none to pleased.

With 24 laps to go, Poole wasn’t done, as he then turned Koch, though no fault of his own. Smith got loose and the No. 11 car checked up, so the No. 48 machine bumped the Stage 1 victor out of the way. It led to a four-car melee.

During the race to the finish, Poole raced has high as fourth, though taking the checkered flag in eighth. In five career road course starts, it was his fourth top-10 effort, though don’t be surprised if he has a couple of return favors later in the season.

On lap 16 all hell broke loose for Matt Bell, who was making his first XFINITY Series start since 2012.

Though there was no replay available of the accident, Bell radioed in to his team that he was experiencing brake issues. However, he’s not sure that’s the reason he crashed, hard.

“The brakes were feeling a little spongy, but it’s a heavy car and you’re going pretty fast, so I didn’t think anything of it,” Bell told RACER, following his crash. “I don’t know exactly what happened, but something definitely broke. You’re pushing against the pedal and it sort of gives quickly.

“It’s when you just spear a wall out of nowhere that it sucks. It surprises you and your legs aren’t braced, your arms aren’t braced, so when you have plenty of time to think about it you can grab the straps and pull your legs back and press your head against the seat and it’s actually fine.”

Holy cow. Heavy hit for Matt Bell in Stage 1. He is out of the car. #XfinitySeries #NASCARonNBCSN pic.twitter.com/xmDzIPOSFE

From what it looks like, it was similar to a brake problem that Casey Mears experienced in practice that led to a head-on collision with the tire barrier. On road courses the brakes are the biggest concern because drivers slam on them upward of 10-15 times per lap, depending on how many corners there are.

For a team that is awfully underfunded, it’s likely that they don’t use the highest caliber of brake pads.

“I’m cruising and I thought I was somehow going to get it to turn; the pedal was on the floor, but I was hoping it would dig in the sand or turn or something and just go down toward the keyhole,” he said. “But once it got back on the grass I saw I was going to hit the wall.”

Whenever Andy Lally is in a NASCAR race, he typically puts on quite the show. Saturday was no different.

The former Rolex Grand Am Champion and four-time class winner of the Rolex 24 Hours of Daytona filled in for Ray Black Jr., hoping to provide Bobby Dotter’s SS-Green Light Racing a better shot at the victory. And the road course ace came dame close.

The No. 07 car qualified 13th, just missing the final round of qualifying. As soon as the event began, Lally charged toward the top 10, but crew chief, Jason Miller, called him to pit road at the same time Hornish pitted, not picking up stage points. But it’s all about winning for Lally, who only competes in one or two XFINITY Series races per season.

In the second stage Lally put on a show, rounding out the top five. Proceeding the second, 20-lap stage, the No. 07 car made its second pit stop of the afternoon, not knowing if the team filled the car up with enough fuel. So, when a caution for Stephen Young came out with 27 laps to go, Lally topped off with fuel, restarting 33rd.

In one lap following the restart, Lally drove up to 24th, before another caution flew for a four-car pileup. Then, in a sting of four green flag laps, he drove the No. 07 car up to 11th before another yellow flag came out. It was go time.

Lally pushed and shoved his way into fourth with under a handful of laps remaining, crossing the finish-line in fifth after Davison pushed him out of the way in the waning laps.

Finishing fifth was a career-best for Lally in 59 career NASCAR touring starts. Previously, the 42-year-old had a best result of seventh, which has happened on two separate occasions, including last years start at Mid-Ohio. For SS-Green Light Racing, it was Dotter’s first-career top-10 finish.

There were none, which is usually when the best XFINITY Series races of the season happen. The Monster Energy NASCAR Cup Series event is being held at Michigan International Speedway this weekend, as it was last year and Ryan Blaney made the trip south to pick up a third-place finish.

“We fought a little bit of adversity just with the second gear half way through. I was really struggling to consistently get it into second gear so I had to use third at turn one and have a couple of goes at it.” – James Davison

What an entertaining race. Personally, I’m a road course nut, I love them. The stretch of four races starting at Watkins Glen International last weekend included three road courses. When away from the Cup Series, it allows for some teams that wouldn’t typically run toward the front shine. Though the race was dominated by Hornish, the event was filled with action, and a complete 180 from last weekends lackluster race at the Glen.

Short track racing, baby. The XFINITY Series heads to Bristol Motor Speedway next for a trifecta of events held at the World’s Fastest Half-Mile. Scheduled start time for the Food City 300 is shortly after 7:30 p.m. ET next Friday night. Austin Dillon is the defending winner.