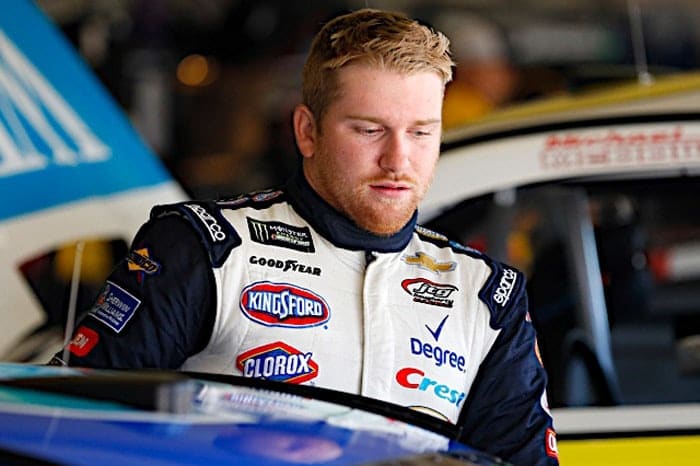 ONE: Logano Isn’t Done Yet

In the end, it was another disappointing finish for Joey Logano at Michigan International Speedway: 28th to be precise, after starting on the front row, the team’s third straight finish of 24th or worse. Since Logano’s win at Richmond International Raceway was encumbered, nixing his playoff berth, there’s no question that his form has taken a dramatic dip. In the spell of 13 races since the win that wasn’t actually a win, the driver of the #22 Shell / Penzoil Ford Fusion has six finishes in the 20s, four more finishes of 32nd or worse only and just a 3rd place in the June Michigan race, 4th at the Brickyard and eighth at Kentucky in the positive column. The subsequent drop in points sees Logano some 98 markers back from a playoff spot in effect, so far in arrears that only a win (or a ridiculous combination of circumstances) will do. Lucky for Logano then that we’re heading to Thunder Valley this Saturday night – a track the nine year veteran loves. Logano has won the night race in 2014 and 2015 and finished fifth in the first race at Bristol earlier this season. Logano has made the playoffs in each of the four seasons he’s raced for the Captain finishing eighth, fourth, six and second respectively in the overall season standings. What he wouldn’t give for another victory on the treacherous high banks of NASCAR’s Colisseum this Saturday night. Don’t rule it out.

TWO: Best Finish of the Year

This time last year, thanks to his rain-affected victory at Pocono Raceway, Chris Buescher was preparing for his first crack at NASCAR’s version of the playoffs. A year later, driving in his first full season for JTG Daugherty Racing, Buescher just recorded his best finish of the season (6th place) after an 11th-place run at Watkins Glen the week previous and a solid spell of results over the past couple months. With the adjustment to a two-car team this year, results have been mixed for Buescher and teammate AJ Allmendinger and the sixth place represents the best finish for either driver — AJ was sixth at Martinsville this past spring — on a non-restrictor plate track. (You might remember that AJ opened the season with a third-place run in a wreck filled Daytona 500.) “Wild,” said Buescher post-race when asked about his race. “We had a tire go down early and put us off sequence early on and this team did a good job today. They played the strategy right and worked hard. We had to fix the car. We had a hole in the nose at one point from debris through one of the crashes. Fought hard all day long, to be able to get to here right now, that is a really cool finish. Really proud of this team.” Here’s to more good results for everyone at JTG-Daugherty Racing before the season is said and done.

So, with three races to go and 13 winners all those with one win are now officially locked in to the post-season and once again we don’t have to wonder what NASCAR would do if we ended up with 17 unique winners. With Bristol this Saturday night, another throwback night race at Darlington Raceway and then the final race of the regular season at Richmond International Raceway it’s a wonderful three-race stretch at tracks that more often than not provide great racing. It will be interesting, then, to see how the playoff bound teams gamble for stage wins and those all-important playoff points because you can pretty much guarantee someone will miss out from advancing to the next round by a solitary point or two. The other thing to mention is that none of the three upcoming tracks will give teams great notes for the playoff tracks so it’s worth those who are locked in trying something different to get it done. Should be fun to watch in the next few weeks.

FOUR: Next Up, Bristol Baby

As I mentioned above, next up it’s the second race of the year at Bristol Motor Speedway – the famous night race. Now it’s fair to say that in recent years, the night race has lost some of its luster but last year’s event saw a really healthy crowd — definitely a step in the right direction. After a three-hour rain delay to kick off proceedings, the race was an eventful one with Kevin Harvick emerging on top after 500 miles of hard racing. Harvick even managed to persuade team owner Tony Stewart to join him in the post-race celebrations. “That was pretty neat to be able to win a race and convince him to actually come out on the front straightaway and do a burnout,” said Harvick post-race. “Hopefully that was pretty cool for the fans, and to see him happy and smiling and having fun and doing the burnout was pretty cool.” This will be Cup race number 114 at the famous venue, an uninterrupted streak that runs all the way back to 1961 and the early years of NASCAR. The spring race this year was won by Jimmie Johnson, after the race was moved to Monday following a terrible weather day on the Sunday.

A quick shout out to Bubba Wallace who picked up the win at Michigan in the Camping World Truck Series this past weekend. It was a first win for fledgling MDM Motorsports and Wallace’s sixth career Truck Series victory in 45 races and his first of the 2017 season. “It’s been so long since I’ve been in Victory Lane. It’s so cool.” Tweeted Wallace post race and a plethora of drivers including Kyle Larson, Ryan Blaney, Daniel Suarez and Alex Bowman and others were all quick to add their congratulations on Twitter. This column has long been a huge fan of Bubba Wallace and I am rooting for a full time ride for him next season (and by this column I mean me but this column sounds more impressive right?) Here’s hoping this win is just another reason why someone would be wise to take a chance on Bubba in 2018 and beyond.

Oh Please. Big Logano fan here. Team Penske fan…but the season has sucked and it will continue to suck! Many factors from NASCAR down, bad luck to the inept crew members and everything else throw in between…(Did they change the crew and not tell anyone?). Logano keeps saying “We have come from behind before”. I love his (at least) public rah rah of saying it..but the reality is..THEY HAD SPEED AND COULD PULL IT OFF, they got nothing this year. And his laps lead before RICHMOND were sub par…so it is not the RICHMOND BS.

They don’t deserve anything, a sad reality..but we have seen a P22 “old points” tally..get the NASCAR magically MOJO going in his favor after missing 11 races and have a wondrous MOMENT AT HOMESTEAD THAT MADE HEADLINES EVERYWHERE (A joke, but reality sadly). NASCAR is not inclined to support any upwards trajectory towards a lowly FORD (IMO), who overall has missed the mark this season. WHY IS THAT FORD, ROBERT YATES, NASCAR, TODD GORDON? Fans wanna know…and why do you put up with the NASCAR BS??? ROGER I AM ASKING YOU! YOU PLAY THE GAME WELL, BUT NASCAR IS NOT GONNA LOVE YOU LIKE THEY DO JESUS JOE AND HIS TOYS DOLLARS! MY OPINION! Why were things changed on you early season, you said “OK” and now your performance sucks? Just asking???? With all the high priced “specialists” around..somebody each week should be earning their paycheck……..

Nope hopefully this will sting the hell out of them, and it should…give them time to think and regroup. Something is wrong in PENSKE land….and FORD..imo They better figure it out. Brad ain’t doing that great either…just saying..compared to the caliber of both drivers performances in the past. They were elite drivers, not this year.

Great point. Hard to beat toyota and nascars favotite team jgr. Supose to be so christian and get caught cheating all the time. Penske will find the problem. I think its aerodynamic not horsepower but who knows since nascar cut the max horsepower to 750 bc the toyotas were blowing up at 850 and the american brands had no problem staying together at 850 another give away to toyota. Penske will find the problem. And sounds like joey has confidence in the team and i do too. If he doesnt make the chase he can do testing at the remaining races and make the whole team strong in 2018.

There are only a few races left for the script writers at NASCAR to give wins to Dale Jr and Joey. Can you imagine the hype/TV ratings if Jr wins the last race of the ‘regular’ season and goes all the way to the final four in the ‘playoffs’? NASCAR never worries about actual competition getting in the way of the narrative or a TV ratings/attendance boom so expect both Dale and Jr to be in the playoffs come hell or high water or phantom debris or blind eye turned to a funny rear suspension part.

Die hard Penske fan here, and I am still holding out hope for Logano! Can’t wait for next year when Blaney joins, yessir, that will be delightful! Funny thing is, I don’t really like Fords, but I just love those Penske boys!

Oh, yes, forgot to add, I would LOVE to see Bubba in a full time Cup ride!