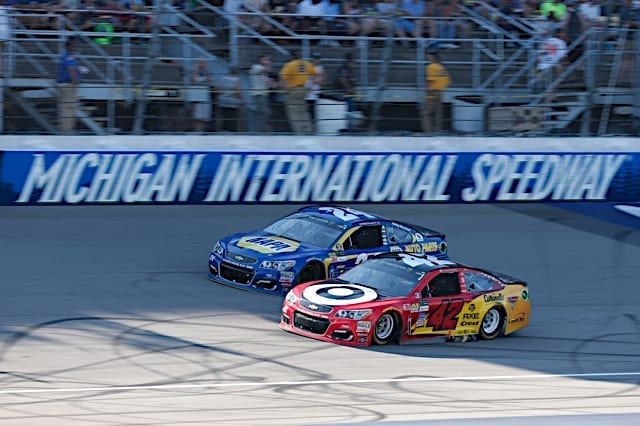 All that talk of possible “sandbagging” and further competitive evaluation after Sunday’s Pure Michigan 400 was just that: all talk.

NASCAR Executive Vice President and Chief Racing Development Officer Steve O’Donnell joined SiriusXM NASCAR Radio’s “The Morning Drive: on Monday to clear up some of the murky waters surrounding the talk this weekend at MIS that NASCAR would take cars back to the R&D center.

“We actually found it kind of comical this weekend,’’ O’Donnell told “The Morning Drive” on SiriusXM NASCAR Radio Monday morning. “We put a little bit of the rumor out there, and candidly it worked.”

O’Donnell went on to say that even if NASCAR wanted to take cars back for further evaluation, it wouldn’t have been feasible for them this weekend.

“If anyone would have done some serious research, the wind tunnel that we would use for this is under construction this week so it would have been impossible […] most of the rumors in the garage was that NASCAR was going to take the cars, so you saw some articles out there about who may be sandbagging, who may not be, which I think is crazy.”

The articles O’Donnell was referring came on the heels of Brad Keselowski’s comments after winning the pole for the Pure Michigan 400 on Friday afternoon on Toyota. He accused them of “sandbagging” and possibly holding something back due to the possibility of NASCAR evaluating the cars.

Kyle Busch then responded to Keselowski’s comments, where he called the driver of the No. 2 Team Penske Ford “a (expletive) moron,” via Bob Pockrass of ESPN.com.

“We’re not going to telegraph when we’re going to do that at a certain race track,’ O’Donnell said of the possibility of taking cars back to the R&D center in North Carolina for further evaluation. “We always want to make sure that we’ve got the best information possible, particularly the aerodynamics of the car, so we’ll continue to do that.”

After the race, NASCAR announced they’d take the race winning car of Kyle Larson, along with second-place Martin Truex Jr. and fifth-place Trevor Bayne’s vehicles back to Concord, but no other additional cars.

“(There’s) a lot of politicking going out there and I think that will continue as it gets closer to the playoffs,” O’Donnell said. “There’s a lot on the line, a lot of different winners, and that’s actually kind of cool to see because people care and they want to do all they can to win.’’

….Yes because the butt kissing spokes person for Brian is not lying. SARCASM! His job is to “protect” his boss and their product at all costs, reality or fiction! He is not to be believed. One of the Emperors minions who refuses to tell the King that he has no clothes.

Not funny on NASCAR’s part. Shows lack of professionalism and respect for the competitors.
It’s like if POTUS would say we are going check out EBT card holders for fraud.