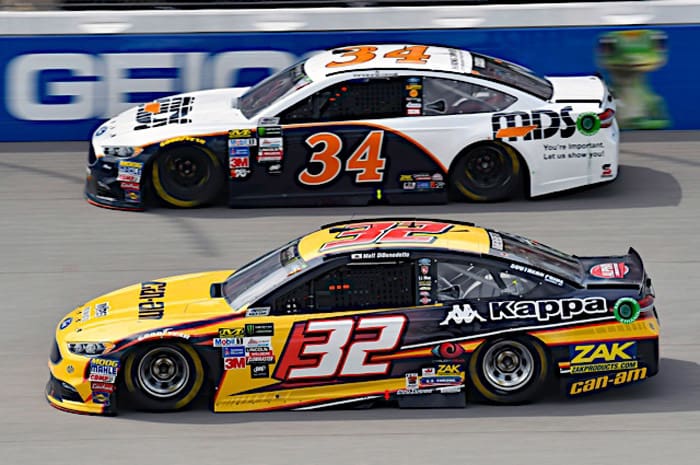 The economic climate in NASCAR is chilly in recent years, and teams are struggling to find sponsorship.  From the bottom to the top of the NASCAR food chain and back again, teams are searching for backing, many simply to exist.  Someone has to pay the bills after all.

But the fight for existence isn’t limited to the smaller teams, and in fact in some ways, it’s affecting the big teams more. Hendrick Motorsports, Stewart-Haas Racing, Richard Childress Racing, Chip Ganassi Racing, Furniture Row Racing…the list of teams losing and/or looking for sponsors for some or all of 2018 is extensive.  Furniture Row has said that if backing isn’t found for the No. 77 being vacated by Erik Jones at the end of this year, that team will shut down, despite having done reasonably well on track this year.

In fact, the smaller teams may find themselves in a better spot than the bigger teams because sponsorship in this bracket is affordable.  Smaller companies can adorn the hood of a racecar, like the recently added Dick Stevens Jerky to the No. 32 of Go Fas Racing. Once upon a time, smaller companies found value in the XFINITY or Truck Series, but after being priced out of the top teams there, have taken to the sport’s smaller teams.

It doesn’t change the hierarchy of the sport, but it is good for NASCAR just the same, and it gives the drivers from the smaller teams a chance to market themselves and a company’s product, just as the No. 32 did this past weekend with a social media giveaway of the Dick Stevens product even though they weren’t on the car at Michigan.

If companies of all sizes can find value in NASCAR sponsorship throughout the garage, it will only make the sport stronger.  It’s unlikely that the sport will see the days of $30 million annual sponsorships return, but that’s not necessarily a bad thing.  As some teams and fans have talked about the need for a spending cap, the economics of the sport may force one, to a degree. And if the bigger teams come back to the field a little bit, it will only help the smaller ones show what they’re rally made of.

Top of the Class: Michigan II

JTG Daugherty Racing is one of those small teams that’s shown it is capable of putting a driver in the top 15 and top 10 when things work out, as they did this weekend for Chris Buescher.  Buescher grabbed his best finish of 2017 in Michigan with his sixth-place run, but it’s also the third finish of 11th or better in the last four races for the 2015 XFINITY Series champion.

Also in the top 15 this week were Aric Almirola, who ran a very strong 12th after missing the June race at MIS due to injury, and Ryan Blaney, who finished 15th after reporting some possible engine issues earlier in the race.

AJ Allmendinger didn’t finish in the top 10 like teammate Buescher Sunday, but he did score a still-respectable top 20, finishing 20th.  Ty Dillon finished 21st, a good gain on the day after starting 33rd.

Landon Cassill fought a loose car all day to finish 25th.  Despite some mechanical issues, Matt DiBenedetto finished 26th, another indication of how far his Go Fas Racing team has come this season. Michael McDowell finished 27th a week after racing into the top 12 in Watkins Glen, following a late tangle with Paul Menard, and rounding out the top 30 were Cole Whitt (29th) and David Ragan (30th).  It’s notable that the Front Row Motorsports pair of Cassill and Ragan have struggled a bit lately to both post strong finishes, and on that level, this weekend was another struggle, but both avoided major issues, which is a small step in the right direction.

BK Racing continues to struggle to find footing, finishing 31st and 32nd with Corey Lajoie and Brett Moffitt, respectively.  If having team cars finish together can be a sign of strength, it can also be a sign of weakness, as it seems to be for the BK duo, who have consistently struggled to finish in the top 30 this season no matter who’s behind the wheel.

Premium Motorsports also had a difficult weekend, with Reed Sorenson returning to the seat for a 33rd-place run, while Derrike Cope finished 39th and last after an engine failure just past halfway. Also toiling near the tail of the field this week were Jeffrey Earnhardt for Circle Sport (35th) and Rick Ware Racing’s BJ McLeod (36th).

Go Fas Racing has seen notable improvement this season with the addition of Matt DiBenedetto and crew chief Gene Nead, and the efforts didn’t go unnoticed, as the team sapped up both DiBenedetto and Nead for another year, signing both through the 2018 season last week.

“I’m really happy to have Matt and Gene back next season! We have improved overall by seven spots from last year and we’re looking forward to picking up a couple more spots before the end of this season. Hopefully we’ll be working our way into the top-25 in 2018 with more help from existing and new sponsorship,” team owner Archie St. Hilaire said in a team release. “All of the guys at Go Fas have worked their butts off this year at the shop and on the road and it’s really showing. We appreciate all the hard work they’ve put in this year.”

This team reminds me a lot of Furniture Row #78 from years ago. Showing steady improvements this season. Don't be surprised if it continues. https://t.co/b2UqTG1uf2

Congrats to @mattdracing and @GoFasRacing32 on their recent contract renewal!

one thing, Ryan is the man on restarts. we pick up spots like grandma needs fiber on restarts. no issues there.

Thanks @JustinMarksDG for coming on air and discussing how terrifying normal arms on kangaroos would be! https://t.co/5zZfYbBELQ pic.twitter.com/jkWL8GtfTw

Simply put “they blew it”. The sport has been in a tailspin for over ten years now. The teams should have been reducing the costs to race all along. Now it’s time to pay the piper. Everybody was getting rich. And now it’s over. With the loss of over two million tv fans and I’d say an average fifty thousand, maybe more, race attendees per race what can you expect ? The value of sponsorship has decreased accordingly. Evidently Lowes will be gone after 2018 and quite possibly Monster.

The powers to be have shown their confidence in the sport returning to the “good ole days ” of 130,000 crowds by reducing the seating at the Speedways. Fox and NBC must be choking on that ten year contract they gave NASCAR. They’re stuck for another seven years. ISC reported that over half of their income was from tv revenue. I think it is fair to assume that the other track owners are experiencing the same. So all of this talk of reducing the schedule is nonsense. Reduce the scedule and you renegotiate the tv contract which I’m sure Fox and NBC would love to do. Ain’t gonna happen in the next seven years. So quit harping on it.

There is no magic bullet to bring the big sponsors back. Reducing the costs to race will help but you need the tv ratings to stop falling and then get them to start to move up again. This is a tall order. I wish them luck.