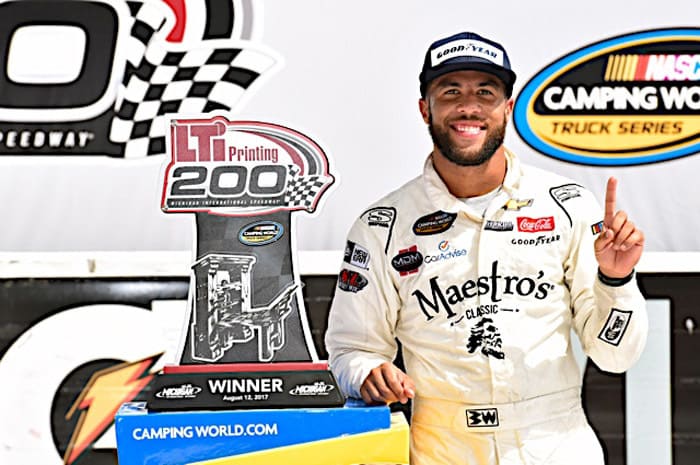 According to the penalty report, the No. 99 MDM Motorsports Chevrolet had an improperly configured truck bed cover on Saturday, as “vent holes at the bed top must be configured for air intake only.”

The L1 penalty also means that Huffman has been fined $5,000, and the team has lost 10 owner points after Wallace’s win, which came in his first start of the NCWTS season.

Grant Enfinger‘s eight-place finish was encumbered, while crew chief Jeff Hensley was fined $5,000 with a suspension for the next event at Bristol and the team was docked 10 driver and owner points.

As the No. 98’s pre-qualifying weight was “affixed improperly,” Hensley also received an extra suspension for the Chevrolet Silverado 250 at Canadian Tire Motorsport Park. Truck chief Josh Hankish was also suspended for the next two races.

Bud Haefele will replace Hensley atop the pit box for Enfinger; meanwhile, a replacement for the No. 99 (which will be driven by Brandon Jones at Bristol) has not been named.

“vent holes at the bed top must be configured for air intake only.”

So they modified the truck after pre-race inspection and expected it to pass after the race?

Downforce baby B). It’s all about that downforce, no mechanical grip required…… smh.

I get it, you want to keep the cars from flying off of the ground. But, in turn, you have ruined the racing show provided to the fans. There has to be a balance, or it will continue to go in a downward trend.

The drivers want it, the fans want it. Find a middle ground to make it worthy to invest time, and effort into watching.

These young drivers all have to learn that after a win, you have to destroy that vehicle! Have Denny teach you how! Burnouts that destroy all the under carriage and cooks the engine. No more problems with encumbered.

Denny? How about Jimmie Johnson who was told by his crew chief to “tear that thing down” after a win? Nobody cheats like Jimmie and Chad. And nobody covers it up better.

I smell discrimination and shenanigans. Where is BLM, Sharpton and Jackson?

Is this a serious response, or sarcasm? Lets not use comment areas for nonsense.

Someone cheated and got caught… period, end of story

If being caught is the measure of cheating, or maybe incompetent cheating, the Penske team passed HMS several years ago.