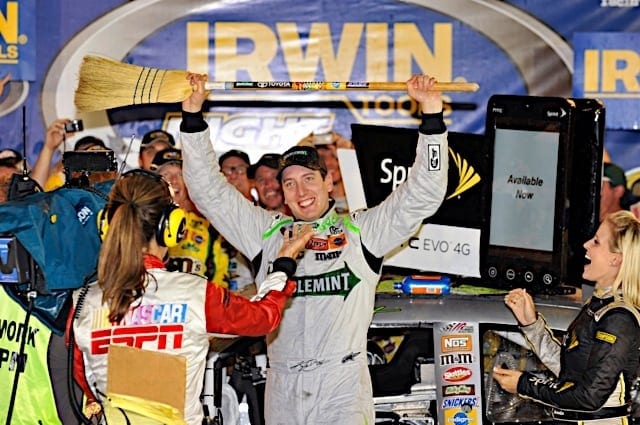 Will Kyle Busch Pull Off the Bristol Sweep?

One down, two to go for Kyle Busch.

After capping off a come-from-behind victory in Wednesday night’s Camping World Truck Series event at Bristol Motor Speedway, Busch will try to sweep the week like he did in 2010 at the Tennessee track, competing for victories in both the XFINITY and Monster Energy NASCAR Cup series Friday and Saturday.

Will he do it, or are there too many contenders in his way? His performance in the Truck race surely proved there are no track conditions that can keep him from moving up the field. Caught speeding on pit road late, Busch rallied from the rear of the field to the lead in less than 50 laps.

However, despite the mother of all comebacks on Wednesday, the top contender against Busch may be the track itself, especially with regards to the Cup event on Saturday night. Though he has won the Bristol Night Race twice, both events of the season have played havoc with Busch’s Bristol prowess. Surprisingly, he has failed to finish a Bristol race in two years, failing the finish four of the last five races dating back to 2014.

Leading 456 laps in this period, that finishing thing has been his worst enemy, but only on the Cup side. His XFINITY stats speak greater, as Busch has finished third or better in 11 of the last 13 races at Bristol. Additionally, he has led the event in every race but one since 2008 and has a series-record eight victories in 24 starts.

No racer is ever a lock for the Winner’s Circle, but Friday has Busch’s name written all over it. The real question is how the Cup event will go 24 hours later.

If you’re Erik Jones, you might as well back up your career-best finish with a racetrack that could’ve brought you your first win.

In April, Bristol was among the rookie’s best efforts of 2017, starting 17th and jumping into the top five before a late wreck slowed his run on lap 422. He came out of the half-mile with only a 17th place to show for it and backed it up with another short track disappointment, crashing out of Richmond Raceway on lap 4.

Will Erik Jones survive Saturday night’s Bass Pro Shops / NRA Night Race? Like pack racing at Daytona International Speedway, simply finishing at Bristol is a crucial factor in leaving the circuit with a strong finish, and Jones has already had plenty of bad luck in short track racing.

However, he has also shown what he can do if the day goes right. In only five Bristol starts in the XFINITY Series, Jones has won twice, the last two spring events. What makes these particularly worth considering is the drivers who finished behind him: Ryan Blaney, Austin Dillon, Kyle Larson, Busch, etc. Cup guys, you know.

And his first Monster Energy NASCAR Cup Series season has also seen strength against the veterans. Despite starting the year with only one top 10 in the first 11 races, the 21-year-old has since compiled another seven in the last 12 races, including a career-long streak of three straight entering Bristol.

Hot off another third-place finish last week at Michigan, potential could reach reality if the night goes right.

How Will Traction Compound Impact Weekend?

Busch’s run through the field Wednesday highlighted what could happen for the remainder of the weekend at Bristol.

Since the debut of the sticky stuff in NASCAR, Bristol has seemed to be the track most manipulated. With the track putting down the traction compound in the lower groove, the last two races have seen the anticipated return of the be-all, end-all inside racing line.

And even though weather and the Whelen Modified race run earlier in the day affected the conditions for the Truck race, we still saw the inside as the preferred groove until the later portions of the 203-lapper.

Perhaps it was a perfect combo, as both the inside and outside lanes were worthy lanes in which to race. Dive bombs, over-unders and the typical lose-some-in-apex, gain-some-on-exit power moves were all on display once the track evened out.

Will it be the same for XFINITY and Cup? With the track re-applying the compound for both races, it may come down to Mother Nature dictating true racing conditions. Saturday looks to be a dry, warm night in Bristol, so that may be the best night of the weekend to see the inside rule all. The XFINITY race on Friday looks to be a little in doubt with rain in the forecast until late afternoon.

If the Truck race showed us the worst scenario even if the rain does hit, we may be in good shape for good racing.

Who Will Get the Edge in IndyCar Title Hunt at Pocono?

Since ending a 24-year hiatus in 2013, the Verizon IndyCar series has returned to Pocono Raceway each year since, giving us hair-raising racing moments and some familiar faces to Victory Lane along the way.

As the sport approaches its 14th round of 2017, the championship is once again coming down to the wire with only four races left to contest.

Pocono has not been a place for surprise winners. In the four races, it’s been Team Penske, Chip Ganassi Racing and Andretti Autosport drinking champagne at day’s end. Scott Dixon took the first victory in a 1-2-3 sweep for CGR and has since finished fifth, ninth and sixth. Even more impressive are his comebacks from poor qualifying efforts, altogether gaining 41 positions from start to finish.

For the four-time series champion, 2017 has been a year of consistency, as his almighty wreck in this year’s Indianapolis 500 is his only finish outside the top 10. It’s been good enough to keep Dixon third in the title hunt, only eight points off the top spot.

Outside Dixon, another worthy contender is Will Power, who bested his two fourth-place finishes in ’13 and ’15 with a win in last year’s event. Like Dixon, Power has some points to gain in the championship, sitting 52 points behind Josef Newgarden.

Ah yes, Newgarden, the new boy at Penske. With back-to-back wins coming into Pocono, he is the points leader for the first time of the season, sitting seven points above teammate Helio Castroneves. And if the competition is looking for Newgarden to flounder, it may have to wait another week, as the American has finishes of fifth, eighth, second and fourth at Pocono.

So Pocono may be a happy place for many of the championship favorites, but only one can end in Victory Lane. But who is saying it’ll be a frontrunner? Ryan Hunter-Reay won this race in 2015, which stands as his last IndyCar victory. He may be 12th in points, but the 2012 champion finished third last year and has a season-long streak of top 10s entering Pocono.

With moments like this seven-wide restart two years ago, the championship could very well be affected with one wrong move.