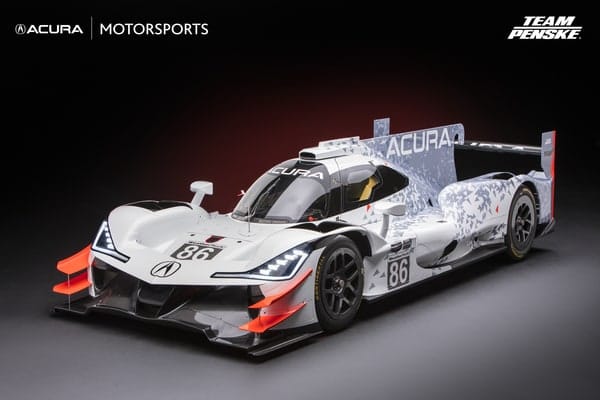 On Friday afternoon, Acura Motorsports and Team Penske unveiled the new Acura ARX-05, which will compete full-time in the 2018 IMSA WeatherTech SportsCar Championship.  The ORECA 07-based challenger will debut in January’s Rolex 24 at Daytona.

Dave Marek, Acura’s Global Creative Director, is very impressed with how the Acura ARX-05 has come out.

“We created a variety of initial sketches, then pared those down a handful of potential designs. Next came aero and wind tunnel model testing, and time for the engineers to have their say,” Marek said in Acura’s press release.  “The design continued to be refined throughout the testing and evaluation process, until we came up with a final treatment that met our performance goals while maintaining Acura styling cues. It’s been an exciting process.”

The new car has a number of touches that make it stand out from the ORECA 07 base car.  Likely the most noticeable ARX-05 exclusive piece is the bodywork that spans over the top of the nose.  The “Jewel Eye” headlights are directly out of an Acura street car and the overall design evokes current Acura design within the DPi rules.

While Acura has the reputation in the United States as the luxury arm of Honda, racing is very important to the brand.

“At Acura, Precision Crafted Performance is at the heart of everything we do,” said Jon Ikeda, Acura’s vice president and general manager.  “Whether it is our production cars or a prototype race car, if you want to be a performance brand you need to perform.”

Performance likely won’t be that much of a problem for the ARX-05.  As previously reporterd, the ARX-05 will be powered by a 3.5-liter AR35TT twin-turbo engine.  It is a production-based engine that is somewhat similar to the standard engine in the Acura RLX (also, the optional engine in the Acura TLX).  It is also used in Acura’s crossovers (MDX and RDX).  The engine has a winning pedigree, having won the inaugural FIA World Endurance Championship with Starworks Motorsport back in 2012 in an HPD ARX-03b.  In addition, the engine was used in Muscle Milk Pickett Racing’s HPD ARX-03a that competed in American Le Mans Series’ P1 class.  In the hands of Klaus Grda

However, the AR35TT engine was tuned to roughly 450 horsepower in the HPD ARX-03b.  In the ARX-05, it will be tuned up to approximately 600 horsepower, equal to the other engines in the Prototype class (Cadillac, Nissan, Mazda and Gibson).