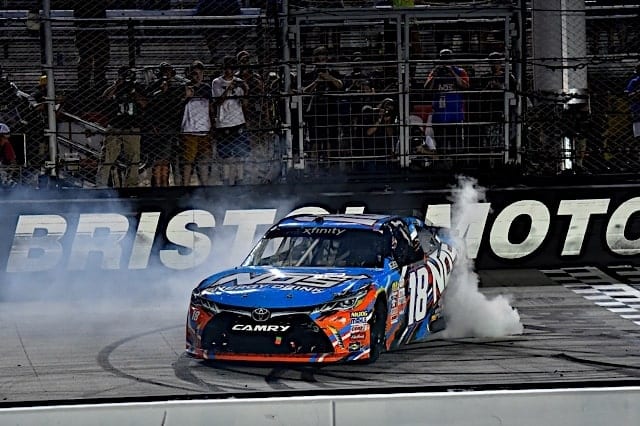 When Kyle Busch claimed his fifth career XFINITY Series pole Friday at Bristol Motor Speedway, he was the odds-on favorite to take the checkered flag.

Busch dominated, leading 186 of 300 laps and winning the opening stage in commanding fashion after fighting off Justin Allgaier over the first 50 circuits. But when the No. 18 team serviced its driver following the first stage, Busch was caught speeding on pit road.

It didn’t matter. Even though Busch began the second 85-lap stage from the rear, he got to the front with less than 15 laps to go. The No. 18 went on to win Stage 2, again in commanding fashion.

As the race wound down, Busch remained the guy to beat. The No. 18 team did have to overcome a late-race caution for a wreck involving a pileup on the backstretch. But in an eight-lap sprint to the finish, it was the Cup Series veteran who cruised to victory.

“At least I didn’t have to come through in the last stage because everybody was pretty fast there tonight in the last stage,” Busch said. “I don’t know if I would have been able to make it all the way back up through there. [Daniel] Suarez gave us a heck of a run there. I was trying to push hard and he was closing in on us a little bit before that last caution came out. Once that caution came out, everything cooled down and my car wasn’t even close to what it was before, so I don’t know how I held on to it.”

Man, I don’t about y’all, but I truly like the race at Bristol. The VHT compound that track officials lay down seems to work, though tonight’s race was won by using the outside line.

The spring Cup Series race was one of the best of the season; owner Rick Hendrick labeled it as one of the best he’s ever seen. That might be a bit of an overstatement, but overall, the new Bristol is fun to watch.

At the beginning of the night, it’s true the XFINITY Series preferred line was the inside. Allgaier made a hard charge next to the wall, clearing Busch on a pair of restarts. But not even 50 laps into the race and the high side was the way to go.

It’s interesting and just accustomed to the way the layout of Bristol now is. The end result is some awesome short track racing and the VHT compound gets two thumbs up from me, especially with NASCAR putting it on other track surfaces.

The first 40 laps of Friday night’s event were a bit hectic. There were three cautions, all for accidents as the XFINITY Series struggled to settle in. On lap 25, Aric Almirola got shoved out of the way off the front bumper of Ross Chastain. As he tried to regroup, the No. 98 car blew a tire, in the process getting spun by Spencer Gallagher. Ryan Reed was an innocent bystander of the incident and the No. 16 team’s night was ruined.

Almirola’s car was irreparable. Reed got back on track only to blow a left front tire 10 laps later. The No. 16 car was done for the night, finishing 37th.

After recording four top-10 finishes in the first 13 races of the season, Reed has gone ice cold. Since a bizarre ending at Iowa Speedway, the team has gone on a streak of finishing 14th or worse in eight of the last nine events. His only top 10 during that span was a sixth-place effort at Indianapolis last month.

Following his lap 284 incident, Brendan Gaughan was pissed, and rightfully so. For the second time in the same stage, Jeb Burton got into the rear of the No. 62 machine, this time ending his race.

Gaughan was running around the back half of the top 15 for the majority of the night before Burton made contact, cutting his left rear tire. That’s what is called a racing incident, but the NASCAR veteran was none too pleased with the young driver following that second go around.

“We were sitting there in the top 12 to 14,” Gaughan said. “We had a loose wheel, which is racing. Two weeks in a row — and I know he doesn’t have many races, and I like him a lot normally, but right now, I’m going to knock the hell out of him. The first time he gave me a flat, the second time he says he blew a tire. If you have a tire going down then don’t drive underneath somebody. The past couple weeks I’ve been driven with no respect.”

The No. 62 car finished in 30th, one week after battling for the victory late in the race before getting driven out in the grass. This poor luck puts Gaughan in a precarious situation as the playoffs draw close.

Burton was making his sixth start of the season, the first since Indianapolis. It’s his last scheduled event of the season for JGL Racing after starting the year with a top-five finish at Daytona.

“I didn’t mean to get into him, I just got tight,” Burton said. “I ran him down from a straightaway, and Brendan and I race really hard together, but I’m doing all I can, this is my last race. It’s the last thing I wanted to do, but he never lets anyone go. It was a Bristol deal.”

Chastain and JJ Yeley keep on trucking along, getting ever so close to that final playoff position. And the duo run together seamlessly almost every week.

Tonight, Yeley seemed as though he had the better of the two cars, but ended up finishing in 16th, one position below Chastain. The No. 4 team started off the day dumping Almirola, which the Cup Series regular was none too pleased with. However, as the the race wore on, the team kept on improving the car and now sits in a tie for 13th in the championship standings with Yeley, 43 points below Gaughan.

Dating back to his 19th-place result at Michigan International Speedway, Chastain has a career high of 10 consecutive top-20 finishes. During that time, the No. 4 team has jumped from 19th in the standings to fighting for the final playoff spot. With four races remaining until the postseason starts, don’t be surprised if that JD Motorsports team sneaks in over Gaughan or Michael Annett.

Yeley, on the other hand, keeps on overachieving with TriStar Motorsports. Come Chicagoland Speedway, if the No. 14 team just misses the playoffs, they might look back on a dismal 39th-place finish at Watkins Glen International as the reason their quest for a championship is over.

Busch picked up his second victory of the weekend and is looking to go three-for-three in tomorrow night’s Bass Pro Shops NRA Night Race. Daniel Suarez did just as well down the stretch, proving a strong foil for Busch; the Joe Gibbs Racing duo finished within a half-second of one another.

Ty Dillon picked up his best XFINITY Series finish of the season, coming home fourth. In last year’s event, he was leading late in the race before tangling with Busch. His older brother Austin Dillon, last year’s XFINITY race winner, finished eighth. Joey Logano was the last Cup Series driver in the top 10, running ninth after going two laps down for blowing a tire during the second stage.

Making his first XFINITY start of the season, Dale Earnhardt Jr. finished 13th. The No. 88 car smacked the wall midway threw the middle stage, hindering his chance at a victory. Yeley and Joey Gase, each making a rare start in the Cup Series this weekend wound up 16th and 27th, respectively. Almirola slumped to 38th, making it only 25 laps into the race.

“I think we could have done a little bit better, but the track just changed so much.  It was definitely a learning curve for me.  It was a lot about restarts and who you were behind and what lane you were in.” – Cole Custer, finished 10th

This event got off to a rocky start with three cautions in the opening 40 laps. However, the final 260 circuits were relatively tame, with tempers flaring only toward the very end.

The XFINITY Series heads to Road America next weekend for its third road course event of the month. Busch won the first race at the twists and turns of Watkins Glen International. Then, Sam Hornish Jr. dominated last weekend at Mid-Ohio Sports Car Course.

Michael McDowell is the defending winner at Road America although he is not scheduled to be in the event. Coverage of the Johnsonville 180 begins 3 p.m. ET next Saturday on NBCSN.

By what stretch of your imagination did his contact with the wall “hinder Dale Jr.’s chance at victory?” Junior was irrelevant all night, battling to stay close to the top ten, half a lap or more behind the leaders. He NEVER showed the least ability to contend for a win, in spite of an obscene amount of camera coverage.

Junior could not beat Kyle Busch or Daniel Suarez under ANY circumstances. He could not even beat the other JRM drivers as he grasps desperately at something resembling competence over his last pathetic attempts at being a race driver.

And then to top it all off, he had to be treated for exhaustion after the race. Junior is wasting the resources of the #88 team every time he straps into a car. He should have retired gracefully BEFORE this season started, but his ego wouldn’t let him. Don’t drink the Junior Kool-Aid. He is the biggest fraud in motorsports. But then, Albino, you are just another FS drone, so why should anyone expect integrity in your reporting?

So Junior couldn’t beat Kyle if Kyle was in Morgan Shepherd’s car?

Junior couldn’t beat Kyle if he spotted him a lap in Morgan Shepherd’s car.

Yeah, right. I thought you were SmarterThanThat.

In the “ugly” category should be Kyle busch stinking up yet another unwatchable busch race. Not sure why the author claims this was just a grand exciting race. I guess if watching a cup champion destroy the lower divisions is exciting then this is for you

Of course, you didn’t watch, Fred, so you wouldn’t really know, would you? The “ugly” category belongs mainly to Dale Junior trying desperately to achieve some sort of relevance and failing yet again.

I’m with Fred on this one. Was unwatchable, just like the trucks on Wednesday night. Tried to watch some of it, then saw Busch dominating again. Along with being told by the announcers how we should all bow down to Kyle because of his wins in the minors and I found something else to do. The media playing along with his total win count, like it means something is the biggest joke in Nascar right now. But I guess when you are a failing sport, you latch on to whatever you can.

Kyle didn’t get the pole for the CUP event so I guess there’s nothing worth writing about.