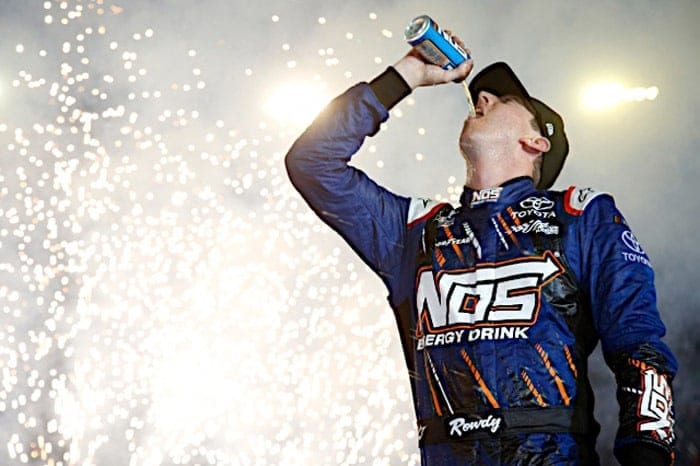 Who’s in the headline – There have been multiple two-race sweeps in NASCAR history, but there have only been a pair of three-race sweeps. Both of them were accomplished by Kyle Busch and the second was this weekend at Bristol Motor Speedway. Busch won the first stage, led the second most laps, including 93 of the last 139 to grab the broom and notched his sixth Bristol victory in the Cup Series. Matt Kenseth grabbed the win in the second stage.

What happened – The PJ1 track bite was applied in a wide swath at the bottom of the racetrack to provide a bottom groove. Cars moved to the top early, kept it cleared off and eventually the top was as racy as the bottom. There were six drivers who traded the lead 21 times, with almost all of them on track passes for the lead. Rookie Erik Jones had the dominant car of the night, and looked to be headed toward the victory. But it was Busch who passed him with 55 laps to go. Try as he might to run him down, Jones had to settle for second. Kyle Larson was another strong contender early, but he faded late in the event. Martin Truex Jr. could have mathematically locked in the regular season points bonus if he had left with a 121 point cushion, but ended just 101 ahead of Busch, who is now second in the championship standings.

Why you should care – Joe Gibbs Racing or an affiliated driver finished in the top four again this weekend. Toyotas still appear to be the best in the field. Jimmie Johnson continues another typical summer swoon. It won’t be surprising to see him make another late season charge in the playoffs. The Ford camp seems to be led by Stewart-Haas Racing right now. Joey Logano is going to have to work hard over the next two races to find the necessary chemistry to make it back to Victory Lane or he won’t be in the playoffs.

What your friends are talking about – Monster Energy is about to make a decision on sponsorships at both the team and series level. Part of their agreement with NASCAR is they will let the series know in December if they’ll pick up an option to extend their partnership through 2020. The team decision will go a long way in confirming if Kurt Busch gets a new contract with Stewart-Haas Racing or goes elsewhere in 2018. Interestingly, part of the decision for Monster is pulling back on their at track activation for the Cup Series. After experiencing Winston and Sprint/Nextel sponsorship, the amount of track signage and activation for Monster is minimal. The philosophy of the company is certainly different than former sponsors, but it would seem like a more active track presence would provide them far more return on investment.

Denny Hamlin said that NASCAR is considering the choose cone as an option to reduce the shenanigans on pit lane at tracks where one lane has a significant advantage over another for restarts. For longtime readers of this column, know this has been a suggestion put forward for years. The Cup participants have long argued that they aren’t ‘smart’ enough to handle the cone. Considering it is used at hundreds of racetracks around the country, that seems like a bit of a ruse. Here’s to hoping NASCAR finally gives the drivers a choice on which lane they use for restarts.

Furniture Row Racing will assume management of their pit crews. After the confrontation on pit road a few weeks ago and the subsequent suspension of some crew members of the No. 78 team, there was a firestorm of criticism for Joe Gibbs Racing over the fact that the crew members were JGR employees and managed by the company. Now, FRR will manage the teams, though they will still train at JGR.

Darlington Raceway will dedicate the Turn 3 tower suites to Dale Earnhardt Sr. and Dale Earnhardt Jr. Earnhardt Sr. is a nine-time winner at the track. The towers will be dedicated on Friday morning before XFINITY Series cars take to the track. The dedication is just another in the long line of remembrances around the famed racetrack that pay homage to the men who helped make the track special in the history of the sport.

The treatment of track racing surfaces will continue and possibly expand during the playoffs. The series met with the driver council at Michigan International Speedway last week and took responses from the drivers about where they would like the groove enhanced. This could result in PJ1 being utilized again at tracks that have used it in the past (Charlotte and New Hampshire) or having tires dragged on surfaces to help add grip and widen racing surfaces. Unfortunately, nothing helps improve racing at tracks more than father time.

Who is mad – Brad Keselowski is always hit or miss at Bristol and Saturday was another miss. Keselowski had a flat tire in the opening 10 laps that knocked him four laps off the pace. For the remainder of the race, Keselowski could never manage to get back to the lead lap. Keselowski and his teammate Logano are both struggling to find overall speed right now.

Kasey Kahne battled with Dale Earnhardt Jr. aggressively during the race Saturday but, in the end, was another poor run, notching a 24th-place finish. Kahne isn’t in danger of falling out of the top 30 so he will be in the playoffs, but his lack of momentum heading into the playoffs may doom him before he even gets starts.

Who is happy – Ryan Newman notched a win early this season, but most of his year he’s been mired back in the double digit positions for the finish, often in the twenties. He scored a sixth-place finish on Saturday night, after a fourth-place run at Michigan. Newman might be catching momentum at the perfect time to make a run for the title.

Trevor Bayne scored his second top-seven finish in the last two races. Bayne has not had much success since his Daytona victory early in his career, but has picked up the pace recently. Bayne started the season consistently just outside of the top 10, but has since struggled back in the 20s. The successive top seven runs have his confidence booming and could spell great things to come for Bayne.

This was Busch’s second victory of 2017.

Busch has six career triumphs at Bristol Motor Speedway, most among active drivers.

40 wins ties Busch with Mark Martin for 17th on the All-Time list, four behind Bill Elliott for 16th and six away from Buck Baker to make the top 15.

Erik Jones led the most laps Saturday night before finishing as the runner-up.

This was Jones’ first top five at Bristol and third of 2017.

Jones becomes the 240th person to score a top two finish in the Cup series.

Denny Hamlin crossed the line in third position Saturday to round out the podium.

Hamlin has finished in the top three for the third time this season.

The top three was Hamlin’s sixth career podium at Bristol.

This was Hamlin’s 88th career top three run which ranks him 29th on the All-Time list.

Rookie of the Race was Jones. That is his tenth such win of the year. Daniel Suarez has eleven and Ty Dillon has three.

Twenty-four races into the season there have been fourteen different winners this year. With three races left before the playoff cutoff the possibility of a driver with an unencumbered win not making the playoffs as been eliminated. You have Martin Truex Jr. who has the most wins of the year with four. Jimmie Johnson and Kyle Larson with three wins, Brad Keselowski, Ricky Stenhouse Jr., and Kyle Busch have two wins, Ryan Newman, Kurt Busch, Austin Dillon, Ryan Blaney, Kevin Harvick, Denny Hamlin, and Kasey Kahne each have one. In the fourteen winners, Joey Logano is not eligible for the playoffs by virtue of his triumph being considered encumbered at Richmond. Logano will have to win again to make the playoffs based on a victory.

The remaining three drivers in points and their position:

The drivers who have scored playoff points so far this season and their total:

Pairing PJ1 with a high groove that is the preferred line when the sticky stuff wears off and the variable of the pace at which the track adhesive does wear out makes for a great night of racing. While some don’t like the multiple grooves at Bristol, they put on another great show Saturday night. Jones had a stretch where he led 107 consecutive laps, but the remainder of the race saw 21 lead changes and racing from the top to the bottom. The lack of a great battle to the checkered flag prevented it from being an instant classic. With that, this one earns five ice cold Yee Haw Pale Ales from Yee Haw Brewery.

Where do you point your DVR for next week – The Cup series is off for their second and final off weekend of the season. The XFINITY Series is the only NASCAR national touring series in action next weekend at Road America in Elkhart Lake, Wisconsin. Coverage begins at 3 p.m. on NBC, Sunday, August 27. The race can also be seen on the NBCSports app. You can listen to the action on your local MRN affiliate, www.motorracingnetwork.com and SiriusXM NASCAR Channel 90. If you have the opportunity this weekend, go to your local short track and see the future stars of NASCAR.

Not a vintage Bristol race (I think those days are gone) but still interesting to watch and a good race by virtue of being a short track.

Denny Hamlin is a prick. To almost cause accidents on pit road because he was being selfish and trying to get in the preferred line should be penalized. I have no tolerance of anyone that will put others in danger for their own selfish benefit. I was glad it backfired on him both times he tried it. What if all of the drivers did that at the end of pit road? The cone would certainly be a viable option to eliminate that. I think it is long overdue. It should have been put in place when they went to double file restarts with the top cars in both lanes. It wasn’t a problem when the lapped cars started on the inside.