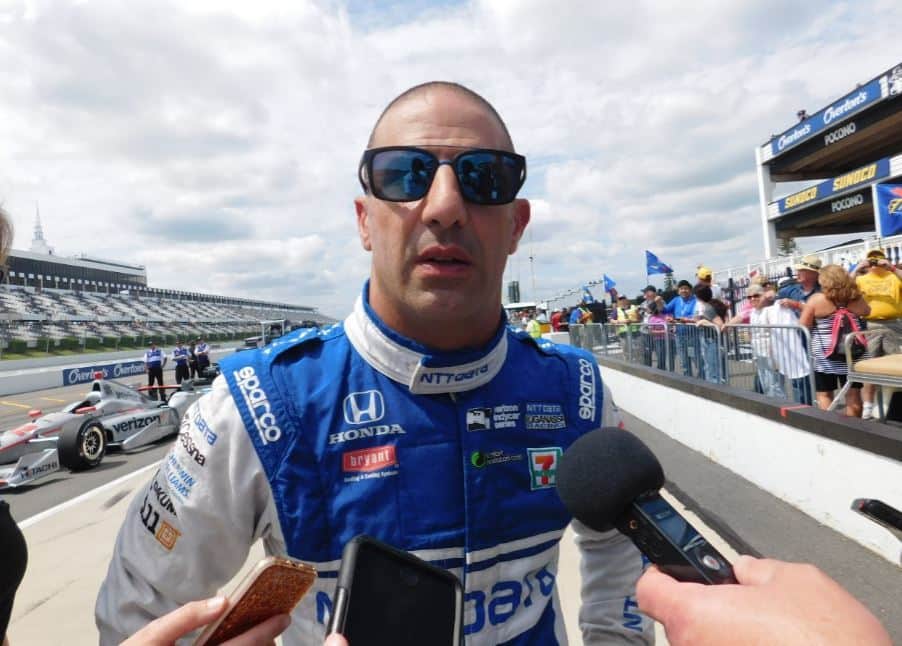 Tony Kanaan began the ABC Supply 500 at Pocono Raceway by doing something he hadn’t achieved since June at Texas Motor Speedway — leading a lap. Starting fourth, the blue and white No. 10 car shot out of a cannon surging to the lead ahead of pole-sitter Takuma Sato before the field reached Turn 2.

The Verizon IndyCar Series veteran wouldn’t give up much ground after that. Kanaan led a season-high 32 laps on the day en route to a fifth-place result at the 2.5-mile speedway.

Kanaan’s Chip Ganassi Racing machine continuously swapped the lead with Graham Rahal, with lead changes coming almost every lap as the circuits were winding down. From lap 123 to lap 150, the Nos. 10 and 15 cars were duking it out to be on the top of the leaderboard, with 17 of the track record 42 lead changes coming between the two during that span.

However, the battle with Rahal was not the decider it appeared to be before the final green-flag pit cycle took place with about 20 laps remaining in the 200-lapper.

Wow, so much fun with the man @TonyKanaan! Hell of a show today, just wait till 2018 when the cars will allow even more passing! @indycar

“This is becoming my Indianapolis I guess,” Kanaan said post-race. “I hope it doesn’t take me 12 years to win this one. We did what we could.”

As Kanaan was speaking to media post-race, a crew member called him over to observe the No. 10 car. The reason? The front wing of the No. 10 machine was banged up, though, he didn’t realize how or when it occurred.

The damage likely effected the way his car handled at the end of the race, he said he just didn’t have enough for eventual race winner Will Power, who used strategy after an early-race front-wing issue to work his way to the top of the pylon when it was all said and done.

“They turned it up at the end,” Kanaan said about Power’s effort. “That’s racing, right? When you’re battling for the win in a series that’s so competitive, if you don’t win, you finish fifth.”

While Kanaan came close to earning his first triumph since August 2014 at Auto Club Speedway, the momentum and confidence is back for the 2004 IndyCar Series champion. Prior to Sunday’s race, his only laps led in 2017 came at Indianapolis Motor Speedway (22 laps) and at Texas (one circuit).

As Kanaan moves forward, he is reportedly up for a contract renewal. If he continues to compete like he did at Pocono Raceway, the Brazilian could rejuvenate his career at the ripe age of 42.