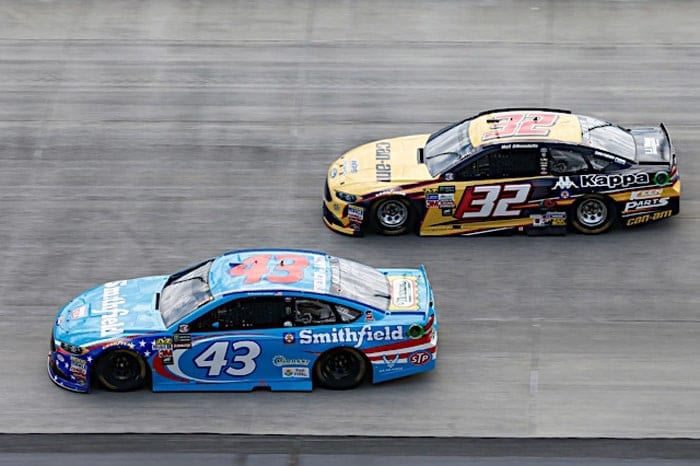 Rolling into the final off-week of the season, it’s hard to believe we’re two-thirds of the way through the season, but here we are. Way back in the spring, after the race at Las Vegas, I gave you five teams to keep an eye on this season, because for various reasons, they looked to be on the verge of a big step forward, and improvement is the name of the game for most of the teams on our small-team list. Let’s take a look now at those five teams and how far they have—or haven’t—come.

Wood Brothers Racing: When this team ramped up their alliance with Team Penske this season, it was great news for second-year driver Ryan Blaney, and the team shows exactly what can happen for a team when they get a boost in the cash and equipment department.  Blaney has improved his average start by five positions over 2016 and while his average finish is about the same as last year, he’s got a win under his belt now, from Pocono in June, and the playoff berth that comes with it.  The team’s one Achilles heel has been consistency, though Blaney sits 12th in points this year, two weeks before the playoff reset—they’ve struggled at times as well.  Still, s solid effort.  Whether the No. 21 stays on this list next year will depend on the alliance with Penske and whether it remains at the same level with Blaney moving over to that stable as Paul Menard moves to the No. 21.

Germain Racing: This is a team I expected more out of.  While Dillon’s average finish of just over 20th place is the best the team has had, individual race results haven’t been what I expected, with Dillon yet to sore a top ten in the Cup Series. He gets a little break as the only rookie driver in this group of five, but considering that his grandfather has to be throwing everything but the kitchen sink at him, he should be scoring a few better finishes than he has. I expected an average a couple spots better with at least one top ten by now.

Go FAS Racing: This team has been the definition of how a small team’s trajectory should look in a perfect world, and then some.  Most teams will agree that a progression from top-35 finishes to top-30’s is ideal, and Matt DiBenedetto, whose popularity has also grown by leaps and bounds this season, has taken this team to that level.  In 2016, with a revolving door of drivers, the team struggled to finish in the top 35 many weeks.  This season, DiBenedetto’s average finish is 26th.  If the next step for a team is top 25s, something that can take a few years, then this team is nearly there in just one. That’s not just a good improvement, but a stellar one.

Leavine Family Racing: Like Go FAS Racing, this team has just one driver in the seat this season, Michael McDowell, and it’s the first time McDowell has run every race in the No. 95.  The team has gelled very well and had some impressive finishes. Like DiBenedetto, McDowell is a very talented driver who hasn’t had a lot of opportunity to show it off, but he’s had flashes this season and has four top-20 runs in the last five races, so consistency is starting to show as well.  Like the no. 32 bunch, the No. 95 team has made some very positive gains.

Richard Petty Motorsports: I kind of suspected that dropping a second team would benefit RPM, and it has.  The second RPM car had struggled for backing the last couple of years and that’s a drain on an organization.  Without the dead weight, the team has looked much, much better in 2017 than a year ago.  They’ve said they’d like to re-expand, but only with solid sponsorship, and that’s a question mark.  If they have the dollars, a second attempt could work better after a solid year.  There was a speed bump in the form of Aric Almirola’s back injury, but Almirola is looking better and better and he’s always good for some strong finishes, even if not every week.

Top of the Class: Bristol II

It shouldn’t be a surprise when Ryan Blaney gets a top-10 finish anymore; he’s proven himself capable this season, and grabbed one at Bristol, finishing 10th.

Perhaps a bit more of a surprise was David Ragan, who finished 17th, his first top 20 on a non-restrictor-plate track since also finishing 17th at Kansas in May, his best non-plate finish of the year.  Call it a small victory for Front Row Motorsports, who have struggled to find consistency at times this season.

Rounding out a trio of small-team drivers in the top 20 this week was Michael McDowell, whose Leavine Family Racing team continues to impress with it’s overall improvement this season.

AJ Allmendinger has had mixed luck at Bristol in the past, but this time out posted a respectable 22nd-place finish, a couple spots better than his average at the track.  Matt DiBenedetto finished 26th, not bad for the No. 32 team, even if it doesn’t tie his career-best sixth-place run at the track.  Also in the top 30 were Chris Buescher (27th), Corey LaJoie (28th) and JJ Yeley (30th), running for the part-time Tommy Baldwin team.

Divide this group into two sections this week: the teams who were running at the end and those who saw their night ended prematurely after getting involved in on-track incidents, because those finishes aren’t necessarily indicative of how a team really ran.

In the running-at-the-end group were many of the usual suspects who are consistently finishing in the back quarter of the field, including Gray Gaulding (31st), BJ McLeod (32nd for Rick Ware Racing), Cole Whitt (33rd), and BK Racing’s Joey Gase (34th).  Add Reed Sorenson (38th) here, whose DNF was from a transmission failure rather than an on-track incident. Don’t mistake this group’s results for lack of effort, but they’re pretty much topped out where they’re running in terms of money and equipment, with the possible exception of Whitt, who’s had some surprisingly strong runs this season for TriStar Motorsports despite the lack of funds.

Landon Cassill tangled with Matt DiBenedetto inside of a hundred laps to go Saturday, sending Cassill to the garage in 35th spot.  Cassill later recounted the accident using a pair of burritos for props (DiBenedetto’s nickname is, incidentally, “DiBurrito” in a nod to people who can’t spell or pronounce his last name).

In this live video I will use two Burritos to explain how I got wrecked by Matt DiBurrito last night @mattdracing https://t.co/jP0fHgJRaM

In the DNF-due-to-accident corner this week are a couple of drivers who were expecting more.  Ty Dillon has run okay this year for Germain Racing and sits 24th in points, best of the Richard Childress Racing affiliates, but got caught in not one but two incidents this week which relegated him to 36th place.

Aric Almirola was also involved in a pair of caution flags, finishing 37th, and Jeffrey Earnhardt was the first to succumb to race damage, bowing out in 40th, just past halfway.

Frank Kerr, crew chief for Cole Whitt and the No. 72 team is hardly a rookie, having been a head wrench in the Cup Series for ten years, but he made a rookie mistake Friday which could have ended badly. Kerr moved lo look under the car before it was secured on a jack stand, and the car rolled off the jack and fell on the crew chief, briefly pinning him.  Kerr was taken to a local hospital but was back on the box for the race.

“I guess the old saying, if you’re going to be dumb you better be tough, right,” Kerr said at the track on Saturday. “Basically, there was 20 to 25 minutes left to go in practice and we were making a change. The left side of the car went up in the air and they were getting the jack stand under there and I thought it was under by then. But they had to hit the jack again to get it up and the jack rolled and the car landed on top of me.”

#ThingsCaleneversaid "Man, we really need some pneumatic lifting devices on these things for pit stops!" pic.twitter.com/7MaR4t3mu9

We have some certified welders getting ready for Eclipse. We had enough for the whole family. pic.twitter.com/xWHhpKkHzt