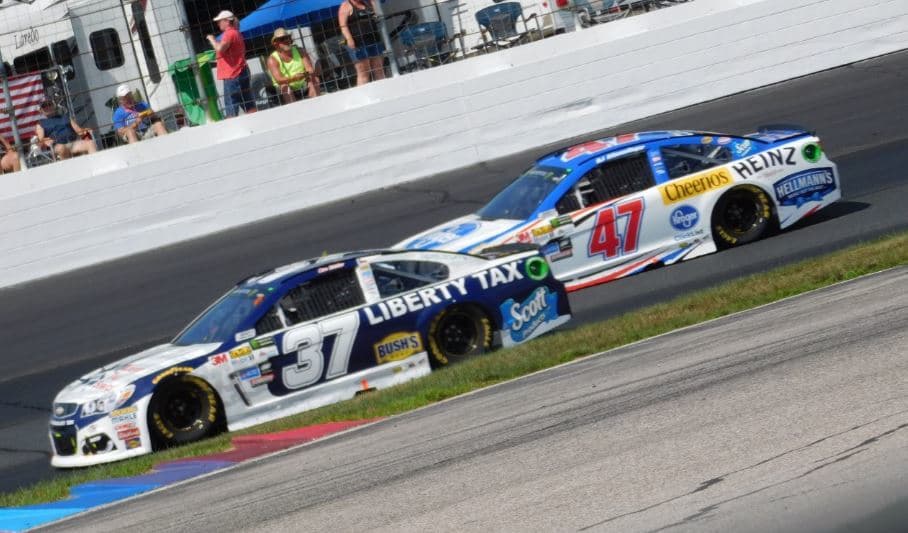 NASCAR officials want the sport to become more interesting by the day it seems, and rightfully so.

The sanctioning body continues to address concerns drivers have on and off the racetrack, and they are listening to the feedback. Racers want to please the fans, so making changes that can enhance competition is probably the ideal option, rather than ignoring it.

As the sport continues to evolve, it is important that fans recognize these changes as a step in the right direction. Not only does it keep up with the times, but some changes, like a possible addition of a choose cone rule, can attract fans who love short track action.

Speaking of changes, there won’t be many at JTG Daughterty Racing next year, with Chris Buescher returning to the No. 37 car for the foreseeable future. The move, which isn’t a shocker by any means because Jack Roush continues to say he doesn’t plan to field a third Monster Energy NASCAR Cup Series entry in 2018, has major implications for the JTG team.

A: Buescher staying at JTG rather than joining Roush Fenway Racing (or a satellite program) is a massive stability statement for this team.

When JTG went from one car to two over the off-season, it was considered a major step forward as one of the sport’s smaller teams expanded. Whenever an organization can add an entry to its fleet, it usually means it is not only making a profit, but sees potential in becoming a top-tier team.

Whether that happens with this crew remains to be seen. However, led by AJ Allmendinger and Buescher, this organization can say that for the first time, it has a chance to break into NASCAR’s elite given the steady flow of income from Kroger for both cars and the potential to own two charters if it decides to either buy the one that’s currently leased from RFR or purchase one from another team.

With one of NASCAR’s longest-tenured sponsors on-board, JTG could work its way into the NASCAR elite. What makes JTG different overall is its deal with Kroger, which is similar to Target’s partnership with Chip Ganassi Racing. Kroger serves as the lead sponsor, enabling consumer packaged goods (CPGs), like Clorox and Breyers, to slap their logos on a Cup car.

One team bucking the trend right now with retail and CPG sponsors is Tad Geschickter's @JTGRacing, which continues to grow with @kroger. pic.twitter.com/WR6tjotYSi

Buescher re-signing with the organization on a multi-year deal is absolutely massive, especially with Allmendinger signed through 2020. A steady driver line-up can go a long way, and this is no exception.

With Buescher continuing to run better, the No. 37 team can certainly become a contender over the next year or two.

Continuing an alliance with Richard Childress Racing will be crucial in Buescher’s growth with JTG. The team’s overall performance has declined in 2017, with Buescher and Allmendinger 25th and 26th in points, respectively. With Tristan Smith taking over as crew chief for the No. 47 team, it is clear going to two cars took a toll on this organization, even with RCR’s assistance.

But now that Buescher is in a secure place, the team can focus on growing. They don’t have to worry about who will drive their car and what the sponsors will be like most of the Cup field, giving JTG a head start to preparing for 2018 and beyond.

Q: Do you think the Choose Cone could be a thing next year? – Kenneth L.

A: It most certainly can be, and frankly, there is no reason why they can’t try it.

There are serious discussions about making this rule part of NASCAR’s top three divisions, according to NASCAR Senior Vice President of Competition Scott Miller. After seeing drivers purposefully slow down on pit road at Bristol Motor Speedway to restart in a specific lane, NASCAR understands it could be a strategy teams will continue to use, especially during the playoffs.

The cone rule would enable drivers to decide which line (top or bottom) they want to restart on after hitting pit road during a caution. It’s quite typical at short tracks across America, with one lane being optimal for passing, especially on restarts, when track position is at a premium.

While communication on-track between drivers is known to help prevent issues like we witnessed at Bristol, it is not perfect. Not only did the strategy fail at Bristol for drivers like Denny Hamlin, who admitted to slowing down on pit road to restart on the high line, but it proved to be dangerous as drivers had to hit the brakes to prevent hitting one-another.

The choose cone rule could be a game-changer. It will shake up strategy a considerable amount with stage racing, and it will also put things into the hands of drivers more frequently.

Think about it. Some tracks having great passing abilities on the low line, while others are clearly better with the high line. With restarts being the best time for drivers to make passes, they will certainly be willing to at least try restarting 10th on the high side at a track like Bristol rather than third on the low line.

However, this rule needs to be integrated in the lower tiers to make sure it will work and not slow down the pace of the events.

What a mess NASCAR has created on so many levels..and the dummies don’t see it. No this apparent appeasement to mollify the sheep is not really where they need to go, and they know it. Smoke and mirrors and more BS, imo. They need to start with the obvious…a competitive car, more passing, quit playing favorites to the highest bidder, get rid of the LEGAL HOT DOG WRAPPER STAGES IE CAUTIONS, get rid of the PLAYOFFS or whatever they are called this year! Reward the best over the season. Not hard, very simple.

This is another example of the lunatics trying to run Brian’s asylum. The drivers position after a pit stop is determined by where he is when he crosses the line. If a driver slows down exiting he gets a two lap penalty and no chance for a free pass. No one will do it again.

I like your solution better but remember, that means that this ends up being a ball/strike judgment call by NASCAR opening up another can of worms and lots of room for fans and teams to question. If it’s blatant (like Denny Hamlin Saturday night) it’s somewhat obvious, but something less blatant becomes much more difficult to call. There are lots of reason a driver may have to decrease their speed exiting pit road. The cone idea is black and white with no room for debate.

OK. Let’s say the race is at Martinsville. Don’t you think all the cars will want the inside lane? There just MIGHT be a backup as they all want the same lane.

Surely someone back in 15th or so will take a chance on the outside lane if they are on the front row. If you are thinking there will be 40 guys lined up single file on a restart I doubt that will happen. Maybe 25 on the inside and 15 on the outside as the worse case scenario.

Of course in thinking about that scenario I think about lap down cars and how messy that could be. More realistically there will be 25 cars on the lead lap, with 17 on the inside and 8 on the outside on the restart,,, so does that mean the lapped cars get lined up starting on row 9 on the outside with lead lap cars to their inside back to row 17?

PS: And I know I should call you Shirley. :)

That should be PS: And I know I should NOT call you Shirley.

Surely you jest! How many collisions will there be as drivers try to change lanes going down pit road?

Not sure what you mean Don.
They don’t line up or change lanes on pit road, right? They come out as they always do and once on the track the restart order is set as each driver in turn decides whether they want to line up on the inside lane or the outside lane.

How many laps is that going to take?

This is just another stupid change because of a previous stupid change going all the way back to the stupidity of Brian being put in charge.

I’m all for a “choose cone” it will really add some interesting strategy to races, and will make places like Martinsville better. Interesting to see Buescher stay at JTG, very quietly that team has been running a lot better.

It may be used at many local short tracks, but applied to the Cup series it’s just another rule to keep track of.

Hey! Here’s an idea! why not have all the lap down cars start on the inside? Then you don’t have drivers braking on pit road, and the lap down cars could actually make a lap up the old fashioned way! I know it’s pretty radical, but what the heck.

I like it. That’s just the radical, off-the-wall kind of thinking we need to get NASCAR back on track.
Next you are probably going to suggest that the championship be based on a year long points system.

To go along with the Darlington throwback theme, go to throwback rules for that race. Restarts with lead lap cars outside/lap down cars inside, no free passes, no wavearounds, no stages. Probably a couple things I am missing.

Let the flag man start and run the race.

Free Winstons for each paid admission at the hospitality tent.