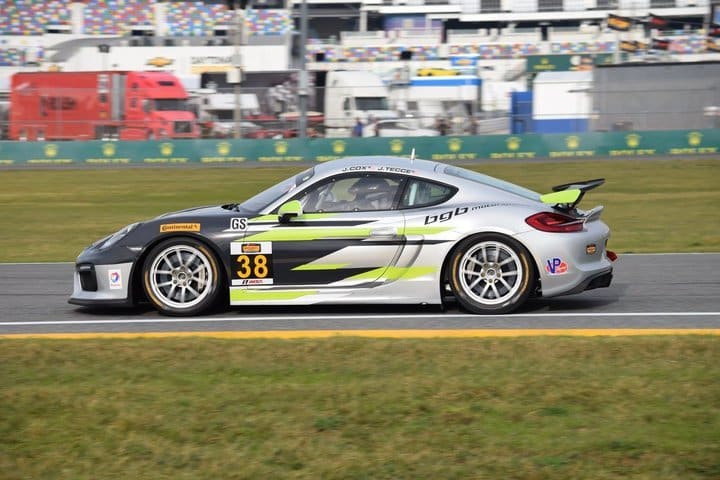 On the undercard of the IMSA WeatherTech SportsCar Championship’s Michelin GT Challenge at VIR is the Continental Tire SportsCar Championship.  Biscuitville, a Greensboro, N.C.-based chain of fast food restaurants that specializes in Southern food, will serve as the primary sponsor of Saturday’s two-hour race.  32 teams will challenge the tricky 3.27-mile full course at VIRginia International Raceway.

In Grand Sport, there are 14 entries, the same number as at Road America.  However, those are not necessarily the same 14.  Mühlner Motorsports America has not entered their No. 21 Porsche.  This car was driven by Gabriele Piana and Moritz Kranz on the road to a second-place finish before a penalty dropped them to ninth.

BGB Motorsports returns to the grid with their No. 38 Porsche Cayman GT4 Clubsport MR that hasn’t raced since Sebring.  James Cox and John Tecce will drive.

At Automatic Racing, both Charles Espenlaub and Charles Putman are out of the Stoner Car Care No. 99 Aston Martin.  In their place are Rob Ecklin Jr. and Steven Phillips, both of whom have driven for the team in the past.

In Street Tuner, there are a couple of changes of note.  DXDT Racing is back with the pairing of David Askew and Aaron Povoledo.  However, they are back without the Kensai joint venture.  Likely due to this, the team has entered the race using the No. 98 on their Porsche Cayman as opposed to No. 63.

Devin Jones in back in the Bodymotion Racing No. 31 Porsche Cayman in place of Colin Thompson.  Jones missed Road America to compete in the XFINITY Series Zippo 200 at Watkins Glen for SS-Green Light Racing.  Jones started 38th and finished two laps down in 26th.

The only other change of note sees Brent Mosing return to the No. 65 Murillo Racing Porsche Cayman.  Mosing replaces Justin Piscitell.

The Biscuitville Grand Prix is scheduled for Saturday afternoon at 2:10 p.m.  The race will be streamed live at IMSA.com and FansChoice.tv.