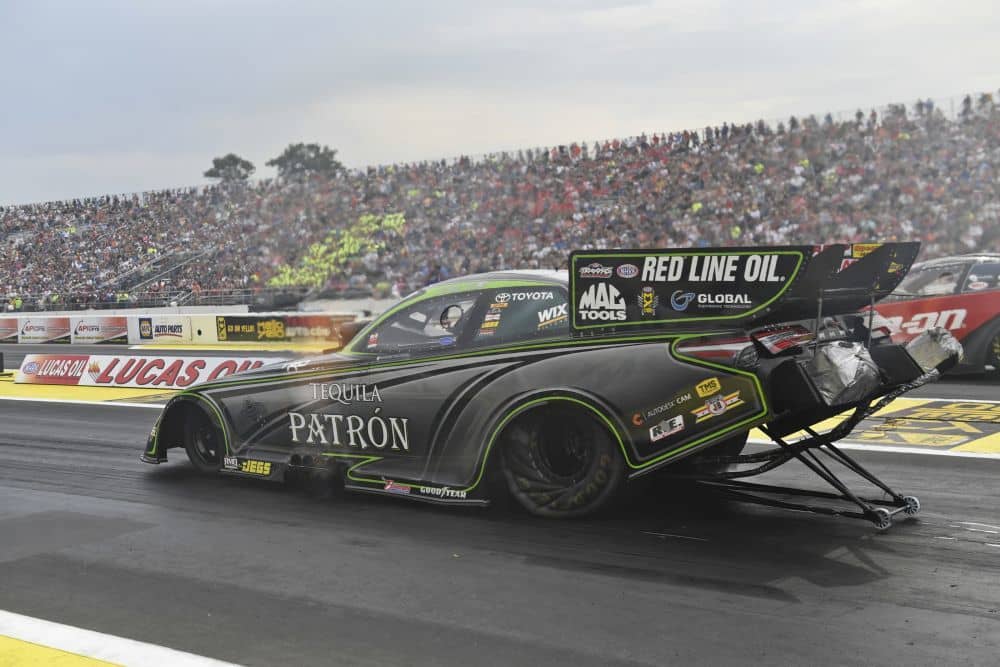 Sportsman classes begin hitting the track on Wednesday, while the pros have their first qualifying session on Friday. Rounds two and three happen Saturday, and qualifying finally wraps up on Sunday with rounds four and five. That’s three days of qualifying and one more round than usual if you’re keeping track. Three days in and they haven’t even gotten to eliminations yet.

Pro Mod has the same extended schedule, more or less, although they have four qualifying rounds instead of the usual three and run their first elimination round on Sunday evening.

But wait, there’s more! In addition to all that qualifying, Top Fuel and Funny Car also contest their All-Star event, the Traxxas Nitro Shootout, with Top Fuel competing in tandem with Saturday qualifying and Funny Car on Sunday.

The eighth and final drivers in both the Top Fuel and Funny Car event are determined by a fan vote, and if you still want to help vote in a driver who didn’t manage to race their way in this season, you can still vote through Tuesday, Aug. 29 by clicking here.

Drivers still needing your support to run in the event include Terry McMillen, Scott Palmer, and Troy Coughlin, Jr. in Top Fuel, plus Courtney Force, Tim Wilkerson, Cruz Pedregon, Del Worsham, and Jim Campbell in Funny Car. If one of those is one of your favorites, help them out by next Tuesday.

It’s already been a full weekend of racing and there’s another full day to go as Monday is devoted to remaining eliminations for Sportsmen and Pro Mod and the full race-day for the Mello Yello classes. If you aren’t in Indianapolis and want to follow along, you’ll be able to see the final two qualifying rounds on Sunday live as well as all of Monday’s action, also live.

And then there’s the Countdown. This is already the biggest race of the season, but it’s also the one that will set the field, once and for all, for the six-race Countdown for the championship.

Seven drivers are already locked in for Top Fuel, but for the other three in the top ten, and for Shawn Langdon, outside of it by just 8 points, this is still very much a big deal. It’s the same story over in Funny Car. Alexis DeJoria got by Pedregon for that final spot in Brainerd, but she is by no means safe, holding a margin of just 12 points over him going to Indy.

Even the drivers near the top have something at stake. Points might be reset, but everyone wants the momentum of entering the Countdown as the number one seed, and with a slightly bigger margin on the next driver back that can be gained from holding that number one spot.

It’s a big event, it’s a long event, and no matter how you look at it, for so many reasons, it’s a big deal.

Programming note: I’d like to thank my colleague Pete McCole for taking over this space, as well as our NHRA Pace Laps coverage, for a couple of weeks while I enjoy a little end-of-summer vacation. I leave you in his capable hands for the biggest event of the year, the U.S. Nationals.

According to the date stamp on my photos, the first time I ever set foot at an NHRA event was in April of 2013. At that time, if you broke the 4-second mark in a Funny Car, you made a really strong run. Just four years later, Robert Hight made history as the first Funny Car driver in the 3.7 second range with this run at Brainerd last weekend.