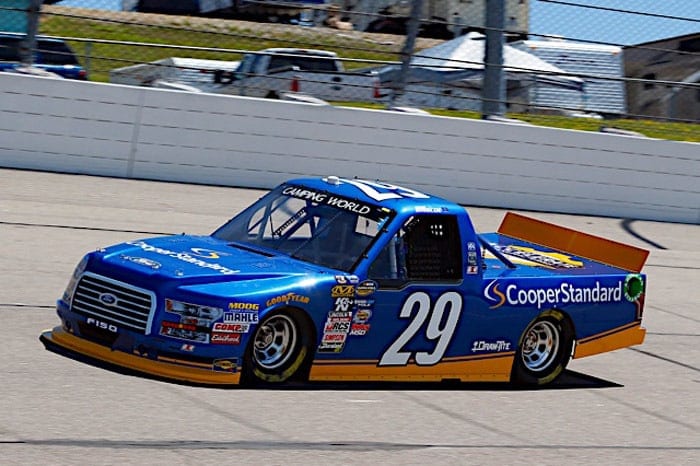 It started with the abrupt closure of Red Horse Racing in May. Just two days after posting a fifth-place run at Charlotte Motor Speedway, owner Tom DeLoach told Motorsport.com “I can’t keep funding it out of my own pocket.”

Just like that, two trucks were stricken from the already short list of full-time teams. And when the checkered flag flies over Homestead-Miami Speedway in November, the Camping World Truck Series will lose two more full-time entries, dwindling the struggling field of full-time trucks even further.

Brad Keselowski Racing announced late last week that it would cease operations after 11 years (10 in Truck Series competition, seven years full-time) at the end of the 2017 season.

In part, the decision was financial, however Keselowski said from Bristol on Friday “that was one of the factors. I wouldn’t say it was the only one.”

For drivers Chase Briscoe and Austin Cindric, it means they have just 10 races to show they’re deserving of another ride in the future, regardless of whether it’s in the Truck Series, or a move to XFINITY. After all, both drivers are winless in their young careers, and while Briscoe is all but guaranteed a spot in the playoffs, Cindric needs a win to make a run for the title.

But despite the bad news coming from a team shutting down, there’s still a heartwarming part to the story that shows team owner Brad Keselowski truly cares about his people. In a blog he posted the same day the team release came out announcing the closure at the end of the season, part of his concern as one of the “really important” things is “helping our employees find new jobs.

“With that in mind, we’re going to transition a number of the employees in different of ways,” Keselowski said in the blog. “Some of them may go to Team Penske as part of the team for Ryan Blaney’s new car, and I’m really excited for those guys. They’ve got an incredible opportunity. Some of our other workers are going to stay with me in other roles. My hope is that everyone will land smoothly in their next job, whatever that turns out to be.”

Meanwhile, Keselowski left several questions about his future in the sport in that same blog. As a driver, he’s obviously just re-signed with Team Penske to race Cup in a multi-year deal, but that’s where the details get a little fuzzy.

“As far as the BKR facility goes, it’s going to play a key role in a new business endeavor I’m planning to undertake,” the blog explained. “I’m not ready to announce what we’re doing, but I’m a big believer in manufacturing, especially advanced manufacturing. We’re looking at developing a new technology that will be relevant to motorsports, and to the broader marketplace, too. Stay tuned.”

Talk about vague, right? Fast forward to Friday at Bristol, and those fuzzy details didn’t get any clearer.

“We’re not ready to announce anything, but I know where I want to go and we’re in the middle of putting all that together,” Keselowski explained. “Until it’s together, I don’t want to get too far down the road with it, but I know that I’m committed to the facility and the community to have an operational and functioning business in that area and plan to do just that.

“The trucks and the parts go out of style and are irrelevant so quickly that I’m gonna liquidate that, but a good part of the equipment that we do have I’m gonna keep and utilize for future opportunities.

Despite the vague answers and references to needing an “income-generating business” if Keselowski decides he’s wants to own a Cup team in the future, the reality is that ownership in the Truck Series is a failing model at this point. We’ve seen more than a couple teams leave the sport in the last few years (Turner Scott Motorsports and NTS Motorsports to name a few), and it’s highly likely others may follow suit.

“It’s not news that you want. I don’t think anybody in the truck series is feeling the health of it,” Kyle Busch Motorsports owner Kyle Busch told Claire B Lang on SiriusXM over the weekend. “It’s not the healthiest of series, and we’re all feeling that. Obviously with Red Horse leaving and now with Brad leaving, that’s frustrating.

“I’d like to think we can all make it better. I just don’t know how that is. I don’t think it’s the competition. Sometimes the truck races are the best races on the weekend, whether I’m in the show or not in the show. Just the fact of the matter is it’s a third tier series of NASCAR and its television ratings are OK. The ratings are decent; they’re just stuck on FS1.

“Anybody that watches NASCAR, they think NASCAR is the Cup Series. Some casual fans don’t even know there’s an XFINITY Series or a Truck Series, so you just don’t get those ratings. There’s no sponsorship because there’s no ratings, and the sport’s expensive.”

Forget for a moment that Busch threatened to shut down his team if he were unable to race in the Truck Series any longer (though he does have a valid reason to say that). In Busch, we have another owner who has expressed concern about the sustainability of the series, and that’s a shame.

How many more teams will go before the industry gets together and develops rules that help the team owners save real $$? #tooexpensive https://t.co/B3efRbQ0Pf

It’s certainly not a problem exclusive to the Truck Series, though the pain seems to be felt the most there, given the smaller purse amounts each race. Sure, NASCAR hasn’t shared those numbers for the last couple of years, but a simple look back at when those were reported proves just how little these teams are bringing home each week.

I wish I could say I had the perfect solution to fix the problem that’s plaguing the Truck Series today. Unfortunately, I don’t. But clearly, cost-cutting has to be a part of that equation.

And NASCAR appears to be making an effort at helping with just that in testing spec engines recently. While nothing has been announced or made official, Autoweek.com reported that spec engines worked well in the ARCA Racing Series for Billy Venturni Motorsports.

“But since we don’t have the inventory of motors we once had when we leased them, we needed to add an extra person per team for the added labor of having to swap motors all the time… Bottom line, for me, we save about $70,000, but I also assume more risk.”

Obviously those numbers aren’t exactly the savings the Truck Series teams would face, however it’s a hopeful sign for the future. Since motors are one of the largest expenses for organizations across the board, the ability to save such a large percentage of the financial investment could make it easier for teams to remain in the series. And for that matter, it could encourage new growth, especially in the smaller organizations scratching and clawing to remain in the sport.

Spec engines are far from the only potential fixes to help the series maintain its sustainability, however it’s a better step in the right direction than is currently in place.

No one knows what the future brings for the series, especially with rising costs, but something has to give… soon. Or there won’t even be a Truck Series to talk about.

Yes, this is a big problem for NASCAR!!! But NASCAR does not give a freaking rip! How short sighted of them!

Marcus Lemonis is stirring the pot again telling Trump supporters he doesn’t want them in “his” store! The gall and stupidity is amazing. He got Brian’s butt cheeks puckering when Lemonis (if memory serves) started the ANTI CONFEDERATE FLAG BS and put the sniveling leader of NASCAR in a corner. Brian had an underlings with instructions to track personal wherever to confiscate the flags! And had Water Cooler Dale on board with it all!

DIDN’T this misguided obviously leftist to the core LEMONIS (or howeveryouspellthisloonsname) (IMO of course) KNOW THE HISTORY OF NASCAR?

Seems it was good for him to build “his brand” and make huge amounts of money off the hard working backs of the NASCAR FAN!!! Now all of a sudden people who support common sense on many issues, people who love America and can’t stand the BS with our Gubment, lefty politics, lefty insanity, have a strong work ethic etc. are the enemy of Camping World!!!!!!!!!!!! The inmates are running the asylum. And if Sour Lemons was selling water on a hot day, I would pass. What a jerk! Boycott Camping World, he does not like you or your money!

Brian has bowed to this loon before, what will Marcus ask of Brian next? Just asking. Insanity is the rule of the day!

And this is always the problem with a business model that doesn’t provide enough revenue to cover expenses. I would be shocked if there is enough cost cutting available to sustain the series.
The teams that do have access to the money aren’t going to want to cut back, and attendance isn’t likely to increase, and there aren’t likely to be an influx of new teams. So the result appears inevitable.

What would happen if all seats at the Truck races were only $5 each? Would that fill the grandstands? How about all the additional concession sales!

russ
Reply to  Tom B

IMHO they couldn’t fill the stands with $5 tickets. Maybe the problem, across the board in Nascar, is that they depend on drawing people from a wide area rather than locally. Perhaps people aren’t willing to do that any more, easier to just watch on TV.
But hey what do I know.