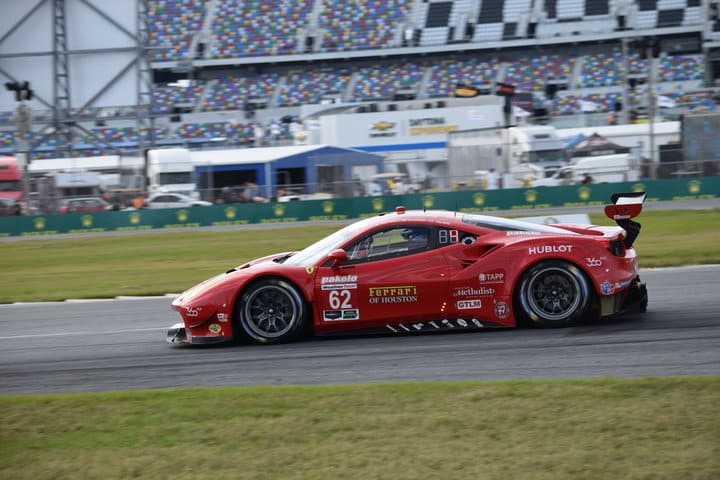 In Saturday morning’s third practice session for the IMSA WeatherTech SportsCar Championship at VIR, teams turned in the fastest laps of the weekend.  Risi Competizione’s Toni Vilander ended up fastest in the session with a lap of 100.855 seconds (116.722 mph).

Unlike Practice No. 2 on Friday, Saturday morning’s session was relatively calm.  However, Corvette Racing’s Tommy Milner had an off-course excursion in turn 3 right near the end of the session.  Milner’s No. 4 Corvette C7.R was not damaged, but he had to deal with the consequences of going off course at a circuit with no paved runoff.  The front grille on the Corvette was covered in grass.  Given that Milner had nearly three miles to drive in order to get back to the pits, he executed a hard stop to get grass out of the grille before continuing.

In GT Daytona, Jeroen Mul continued his form from Friday.  Mul topped the charts for the third consecutive session, this time with a lap of 103.223 seconds (114.044 mph).

Mul’s lap was four-tenths of a second faster than Stevenson Motorsports’ Lawson Aschenbach.  The No. 57 Audi was not significantly hurt after a trip to the tire barrier Friday afternoon.  Turner Motorsport’s Jesse Krohn was third quickest, followed by Park Place Motorsports’ Jörg Bergmeister.  3GT Racing’s Sage Karam was fifth quickest.

Qualifying for Sunday’s Michelin GT Challenge GT at VIR is scheduled for 12:20 p.m. Saturday afternoon.  The session will be streamed live at IMSA.com and FansChoice.tv.