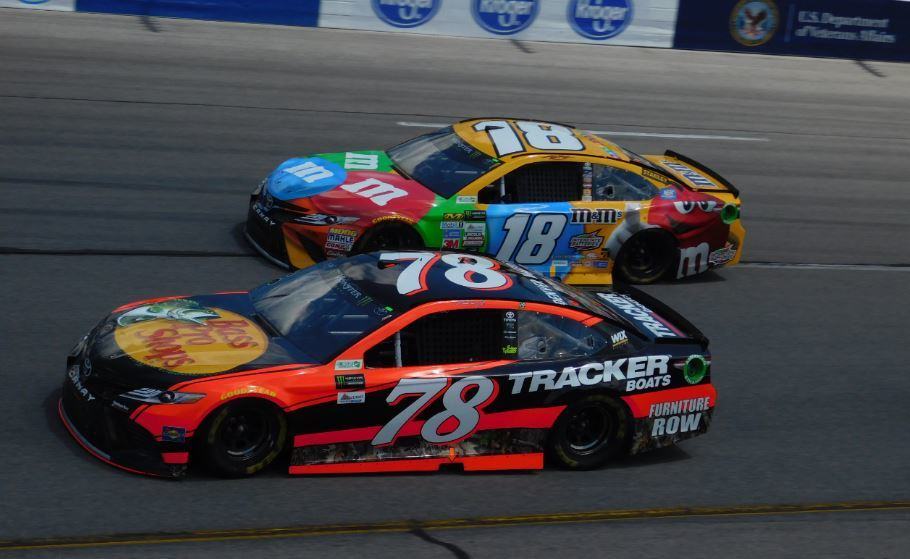 How… important are stage points?

Assuming Martin Truex Jr. doesn’t completely under perform at Darlington Raceway or Richmond Raceway, the No. 78 team will enter the playoffs with at least 50 total playoff points. That’s 30 more than Kyle Busch, as he had 20 playoff points. That’s going to be a huge advantage for Truex as the rounds go on and it gets harder and harder to break through to the next round.

And if Truex makes the final race at Homestead-Miami Speedway, it’s going to be tough to beat him. Furniture Row Racing produces rocket ships, not racecars, at 1.5-mile tracks, such as the final race of the season.

So really, all Truex is going to need to do this off season thanks to these playoff points is to coast to Homestead, instead of having to focus on having a great race, every race. As long as Truex doesn’t mess up a race in the third round, he should be able to make it to Homestead and have a really good chance at winning his first championship. A lot of teams have to be taking notes on how to do this; win as many stages as possible instead of focusing too much on the race win.

Who… is having a breakout season?

Ryan Blaney has already matched his top five and top 10 mark from last season with 12 more races to go, and picked up his first career victory in June at Pocono Raceway. With Blaney moving to Team Penske next season, only bright things seem to be in his future.

Ricky Stenhouse Jr. has done more than just win at Talladega Superspeedway and Daytona this season. Stenhouse has also matched his top five mark from last year and has accumulated one more top-10 finish.

Erik Jones has had speed for much of his first summer in the Cup Series but hadn’t been able to translate that speed into results into last weekend at Bristol, leading over half the race and finishing second to Kyle Busch. Now that he has some experience, be ready for more break-out performances this fall from Jones.

Who… is having a down season?

Joey Logano just hasn’t been the same since his victory became encumbered following the Richmond in April. Now,  Logano enters the last two races of the regular season needing to win or miss the playoffs for the first time since joining Team Penske in 2013.

Kevin Harvick has had a great season so far, winning at Sonoma Raceway and sitting fourth in the overall point standings. But it hasn’t lived up to the excellence that was his past three seasons. All of his numbers are down from last year (top fives, top 10s, laps led, etc.) and he hasn’t been a threat to win every week like he was in those seasons.

Jimmie Johnson won three early season races, but just hasn’t had a lot of success since. He hasn’t finished in the top-five outside of those three victories, only picking up seven top 10s along the way, which leads into the next question…

Has… Hendrick Motorsports lost its way?

In addition to Johnson, there have been a lot of problems with Hendrick this season. Chase Elliott sits seventh in the standings and is the best performing of the four Hendrick cars week-to-week, but he still hasn’t found that first win. Dale Earnhardt Jr. continues to struggle this season, while Kasey Kahne would be in arguably the worst season of his career if it wasn’t for his surprising win at Indianapolis.

Hendrick’s struggles have been partially blamed on the outdated Chevrolet SS the teams run, which hasn’t been updated since being introduced in 2013. But with that problem being remedied next season with the introduction of the Camaro to Cup competition, there’s not going to be many more excuses for the underperformance next season. With William Byron and Alex Bowman replacing Kahne and Earnhardt respectively, this team is going to need to make some improvements this fall and winter so as not to torpedo both drivers’ young careers.

Will… there be any silly season moves?

Typically, NASCAR has a fairly tame off-season compared to most other sports. With the lack of a draft, there’s typically not too many big moves year-to-year, except for maybe one of two.

That hasn’t been this case this year. Dale Earnhardt Jr. kicked things off by announcing his retirement after this season, kicking off multiple moves that have impacted just about every major team on the circuit so far.

Highlights so far have included Matt Kenseth leaving Joe Gibbs Racing in favor of Erik Jones, Kasey Kahne being moved away from Hendrick Motorsports for William Byron, Team Penske starting a new team for Ryan Blaney, and Paul Menard replacing Blaney in the Wood Brothers No. 21 car. NASCAR will be radically different following the end of this season for years to come.

What… has been the take away from the season?

It’s impossible to argue that NASCAR is a sport anymore. NASCAR is a business, first and foremost, that favors the rich and gives opportunities to the privileged.

If NASCAR were a sport, why would a driver like Darrell Wallace Jr., a driver who has proven he can hang in a Cup Series car, be sitting on the sidelines while Cody Coughlin under-performs on a weekly basis in one of the best rides in the Truck Series field? It’s simple, really: Coughlin’s family has money and Wallace’s doesn’t. Some on the outside of the sport may make the matter about race, which seems really easy to do given our current political climate, but the reality is that the only discrimination Wallace has faced in NASCAR has been that his father is not a millionaire. And Wallace isn’t the first to be reduced to sitting on the sidelines due to lack of sponsorship, nor will he be the last. He’s just the latest example of a larger problem.

If NASCAR was open to all to compete, why is it near impossible for a driver to race in the national series unless they have rich parents, former big name drivers as parents, or a really close relationship with a particular sponsor? The only young name I can recall in good equipment at the Cup/XFINITY level that doesn’t have that is Kyle Larson. And the only reason Larson is in the Cup Series as it is, is because Chip Ganassi realized just how talented he was before any other team owner or sponsor. Larson is an outlier, a once-in-a-generation talent that could probably win in any era of the sport. But for every Larson, there’s about 20 other drivers in thanks not to their skills, but to the almighty dollar.

Imagine if Aaron Rodgers wasn’t allowed to replace Brett Favre because a team sponsor wasn’t happy with him. Or what if Blaine Gabbert was guaranteed a starting job with any team in the NFL because his parents were rich enough to sponsor the team?

In the early 1970’s, NASCAR was in a tough situation because it relied too much on manufacturer support in the 50’s and 60’s. Top teams were shutting down left and right as costs increased due to the manufacturers pulling out of the sport for various reasons. It came to a head when Junior Johnson announced he was shutting down and the RJ Reynolds company called about sponsoring his team through the Winston brand. After deferring to Bill France Sr. for the company to sponsor the whole series instead, the rest was history, and NASCAR teams have embraced corporate sponsorship ever since.

But now that the ratings continue to tank and the sponsors continue to either leave or pull back, NASCAR once again finds itself in a tough situation. The business branding itself a sport is failing. A major change is coming to the operating of a race team, whether the teams want it or not. The loss of income will be a huge issue to the sport for many years to come. It’s up to the owners to decide if they want it now, or if they want it a few years down the road where the change may be harder to make. Stuffing the Cup field with pay drivers just isn’t going to work in the long term or else the series will lose even more credibility with fans. And a magic phone call isn’t going to just bail them out again.

Logano was not great before RICHMOND, let us stop with that narrative PLEASE!

I assume that Johnson & Knaus are playing possum as usual. Maybe I’m wrong and I’ll be happy if I am and they really aren’t running well but somehow they always seem to find “magic” for the Chase.

Yeah NASCAR has become what IndyCar and Formula 1 racing was all about — pay to play. You are correct that it is not a sport any longer. All of the silliness that Brian France imposed with his grand scheme have sucked all the fun out of it IMO.

You reap what you sow.

Hard to call NASCAR team ownership a business when way too many people are spending 20 million to race for 5. NASCAR’s only business men are the track owners.