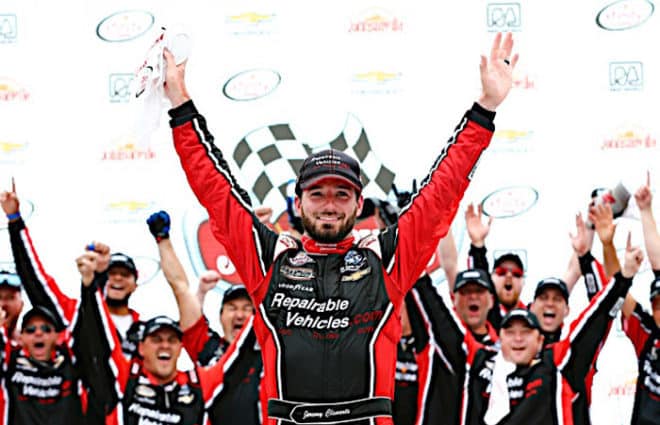 Monster Energy NASCAR Cup Series: What to Do With An Off-Week – Hopefully, you enjoyed your off-weekend, because they will be no more in 2017.

After an 18-week stretch for the Cup guys, they all kept it easy this last weekend of August before a final 12-week haul leads us to the offseason. But let’s not talk about that, instead let’s look back on how the top series guys spent their time on the sidelines.

First, of course, was the XFINITY Series main event at Road America, which had no full-time Cup drivers participate. However, a few 2017 Cup guys did compete in the 45-lap race, led by three-time racer this season Brendan Gaughan finishing fifth. He was followed by Josh Bilicki and Ross Chastain in 12th and 13th, two drivers who combine for three Cup starts this year.

But for the full-duty guys, they spent the race from the couch for once, taking in the underdog glory that was Jeremy Clements’ shock victory in his No. 51 car. Brad Keselowski, Dale Earnhardt Jr., Austin Dillon and others took to Twitter to congratulate Clements on his first win.

For others, they enjoyed the anticipated boxing match between Connor McGregor and Floyd Mayweather Saturday night. Kyle Larson watched from the Bahamas while Denny Hamlin and Kyle Busch witnessed it in person. Busch also appeared on the ABC show Pyramid with Michael Strahan.

Overall, perhaps Clint Bowyer was the only one “relaxing” on his off-week from racing, listening to some George Strait and sipping some wine. Ain’t that Bowyer? – Zach Catanzareti

XFINITY Series: Jeremy Clements, Underdog Story of the Year – Following Sunday’s race at Road America, there is only one XFINITY standalone remaining on the 2017 schedule. This one was a hit.

Filled with a variety of pit strategy, there was no clear-cut favorite of who was going to end up in Victory Lane. Jeremy Clements led a stretch of eight consecutive laps, before pitting with less than 10 to go.

Fresher tires proved to be the key to winning on the road course, even if they were only 10 laps newer than the competition. Clements flew through the field, gaining more than 10 seconds, picking up chunks at a time, until the No. 51 car caught Matt Tifft on the penultimate lap of the race. When the series veteran got to the rookie in Turn 13, they hit, they spun, and they kept on chugging along.

Clements did a complete 360 before re-firing the No. 51 Chevrolet with Michael Annett coming quickly. The family owned race team went on to score its first career victory, fielding only three or four full-time employees. It was Clements’ first victory and second top-five effort in 256 career XFINITY starts.

The victory assures Clements that he will be a part of the playoffs, which begins in three weeks at Chicagoland Speedway. That guarantees the organization a career-high points finish in just its seventh full-time season. This one was fun to watch. – Dustin Albino

The race had a tumultuous start as Tony Kanaan spun in Turn 2 before the contest even started. He sped up to get in position for the double-file grid when he lost control and backed his No. 10 Honda into the outside wall.

When the field finally took the green flag on Lap 6, pole-sitter Will Power spun out in the same corner and collected Takuma Sato and Ed Carpenter.

Once the race got into a stretch of green-flag action, it was a Team Penske parade. Newgarden led 170 of 248 laps and battled teammates Simon Pagenaud and Helio Castroneves throughout the night. Dixon kept himself in the mix and ended up second. Pagenaud finished third, Castroneves fourth and Conor Daly fifth.

Two races remain with Watkins Glen International next on the schedule. The Penske quartet and Dixon occupy the top-five positions in the standings. Although Power finished 20th at Gateway, he is fifth in points, 83 behind Newgarden, so he’s not out of the hunt, yet. – John Haverlin

Sports Cars: SMP Racing Gives Dallara First Global LMP2 Victory – Here in North America, the Dallara LMP2 is the base chassis for the Cadillac DPi-V.R., a dominant car that has won seven of the eight Prototype races in this year’s IMSA WeatherTech SportsCar Championship.  However, the regular Dallara LMP2 is seen as the No. 3 pick of Global LMP2 chassis, behind the ORECA 07 and the Ligier JS P217, but ahead of the Riley Mk. 30.

On Sunday, SMP Racing dominated the European Le Mans Series’ 4 Hours of Paul Ricard to take the first victory for the new Dallara LMP2-Gibson.  For SMP Racing, despite winning the 2014 FIA World Endurance Championship LMP2 title, it is their first-ever victory in sports car racing.  It is also the first-ever win for Russian drivers Matevos Isaakyan and Egor Orudzhev.

By no means was the Russian duo’s victory a squeaker.  The margin of victory was 87.817 seconds over G-Drive Racing’s No. 22 ORECA 07-Gibson shared by Nicolas Minassian, Memo Rojas and Leo Roussel.  They were the only two cars on the lead lap at the end off the race.  LMP3 was won by United Autosports’ John Falb and Sean Rayhall while GTE was won by Spirit of Race’s Duncan Cameron, Matt Griffin and Aaron Scott.

Round No. 5 of the European Le Mans Series is the 4 Hours of Spa-Francochamps, scheduled for Sep. 24. – Phil Allaway

Phil Allaway has three primary roles at Frontstretch. He's the manager of the site's FREE e-mail newsletter that publishes Monday-Friday and occasionally on weekends. He keeps TV broadcasters honest with weekly editions of Couch Potato Tuesday and serves as the site's Sports Car racing editor. Outside of Frontstretch, Phil is the press officer for Lebanon Valley Speedway in West Lebanon, N.Y. He covers all the action on the high-banked dirt track from regular DIRTcar Modified racing to occasional visits from touring series such as Tony Stewart's Arctic Cat All Star Circuit of Champions.
Previous ‘I’m Shocked’: Jeremy Clements Scores Big With First XFINITY Win at Road America
Next XFINITY Breakdown: Spin And Win For Jeremy Clements

Due to the cancellation of the Lime Rock Park 120, IMSA has scheduled a doubleheader …

Did You Notice? … Denny Hamlin and Michael Jordan are teaming up to form a NASCAR …