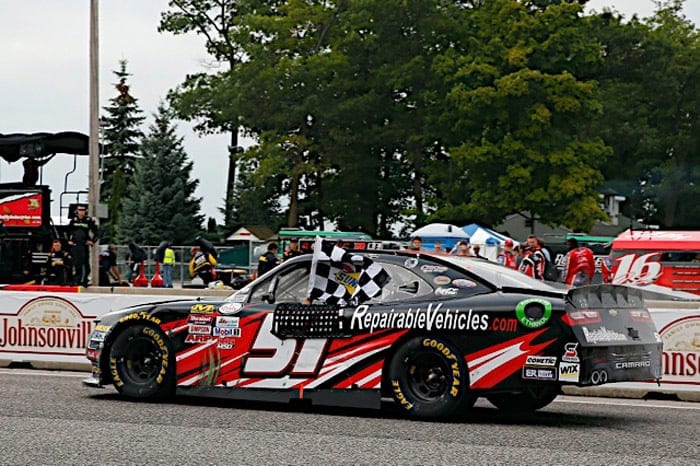 With quite a number of Cup Series drivers enjoying a vacation on their final off weekend of the season, there wasn’t a single Cup driver in the field for the Johnsonville 180 at Road America. Just about every race this season without Cup drivers has been great, and this past weekend was no exception.

The finish will be talked about for years as one of the greatest of this era.

With two laps to go, Jeremy Clements was fighting with Matt Tifft all around the racetrack, catching him from over 10 seconds back for the lead. Clements got under Tifft heading into the final turn before the white flag, slid, and spun-out both himself and Tifft. Clements re-fired before Tifft and maintained an easy lead on Michael Annett to win his very first NASCAR XFINITY Series race.

Jeremy Clements got into Matt Tifft coming into the white flag, then hung on to win at @RoadAmerica! #NASCARonNBC #XfinitySeries pic.twitter.com/53bhg2hXl5

The finish was thanks to superior tire strategy from Clements, who pitted after Tifft on the last round of green-flag pit stops and had the faster car. This was just his second career top-five finish after finishing fourth in last year’s race at Talladega Superspeedway.

“I don’t know what to say, just shocked,” Clements said in Victory Lane. “This is a car built in 2008, everything we got is old and used… I’m just like, is this real?”

No hard feelings seem to be had between Clements and Tifft; Clements apologized in Victory Lane for accidentally spinning him out and Tifft seemed to accept the loss in an interview with NBC, pointing out that he was struggling anyway on older tires. This came after a pretty wild race that had multiple cars spin out or wreck and some surprise performances, such as guest driver James Davison winning the first stage or Daniel Hemric winning the second stage.

It’s always good to see an XFINTIY Series driver win an XFINITY Series race. It’s great to see an underfunded driver get a surprise victory. But when the finish was as spectacular as the one seen today, it’s something special to see.

What a win for @JClements51. He did, however, take the blame for his move on Matt Tifft to win @RoadAmerica. #NASCARonNBC #XfinitySeries pic.twitter.com/h5AC85jXB1

With his win, Clements has clinched a spot in this season’s playoffs, his first appearance. This was the first win for an underfunded team in this series since Kurt Busch at Daytona in 2012 for James Finch. And it was all set up thanks to Clements pitting later than the other lead drivers and having fresher tires than just about everyone else.

Davison started his third career NASCAR race on the front row and comfortably leading the entire first stage of the race. But a speeding penalty on pit road during the stage break put him in the back of the pack for stage 2. The No. 20 car battled back into the top 10 before being taken out in an incident involving multiple other cars.

There were multiple accidents throughout the race, and to NASCAR’s credit, there were only two early non-stage break cautions and none in stage three. With just how huge the four mile Road America course is, there was no need to call a full course caution for many of these incidents. There was plenty of contact in particular in stage three, with incidents involving Dylan Lupton, Spencer Gallagher, Scott Lagasse Jr. and several others.

There were two major incidents that seemingly took out a lot of the favorites in the field near the end of stage 2.

Heading into Turn 1, Ryan Reed was racing with Justin Allgaier aggressively and spun out after over driving the corner, causing damage to Allgaier’s car and losing just about all of his track position. Reed didn’t finish after a later crash (Reed was involved in at least three incidents today in total) and Allgaier finished 11th.

Austin Cindric, Justin Marks, Ross Chastian and Davison wrecked while all were running in the top 10 heading into turn 13 of the last lap. Chastain tried to squeeze into a hole that wasn’t there on Marks and ended up causing a big wreck.

Big crash at the end of Stage 2! Daniel Hemric wins but not before some serious contenders got into each other! #NASCARonNBC #XfinitySeries pic.twitter.com/6lHmZSGu5I

All were able to recover except for Davison, who started second and won the first stage before having to park the car due to this wreck; Cindric finished 16th after a late cut tire, Chastain finished 13th, and Marks drove all the back up through the field to finish fourth.

Underdog performance of the race

Although Clements was definitely an underdog in the race, an even smaller team walked out of the race with its first top ten. Precision Performance Motorsports is a part-time team formed two years ago by Rick Gdovic, with a best finish of 12th at Iowa Speedway earlier this season in 15 total starts entering Road America.

Parker Kligerman, a former Cup Series driver who comp-etes parttime in the Camping World Truck Series and serves as a reporter for NBC Sports, brought the No. 46 car home in 10th after having to drive his way through the pack after starting 39th.

“We had a couple of issues, we struggled a bit,” Kligerman said. “Had no brakes last, the longevity of them… We did almost everything right, we were just missing that crucial little bit of speed to go run top 5. I could see the top 5 during that last run at times, we just couldn’t keep up with them.”

“These guys at JR Motorsports gave me a great car. Learned here all day, haven’t been here in five-wait, eight years- no, five years. I guess that’s why they called the fuel strategy, just a great weekend overall” – Michael Annett

“When cars got off the track, they put up all that mud and grass and such, it just made it real slick. You just could not go too far on the curbs or else you’d find yourself in the wall.” – Parker Kligerman

Today was the capper to a great month of XFINITY Series racing. If NASCAR came out tomorrow and said that half the series schedule for next year will be short tracks and the other half road courses, nobody can say it would be boring. As the XFINITY Series heads into the playoffs, the battle to get in (Brendan Gaughan has just a four point advantage over Dakoda Armstrong) is going to be great to watch these next two weeks.

It’s time for the great southern tradition at Darlington Racway. The scheduled start time for the VFW Sport Clips Help A Hero 200 will be at 3:30 p.m. ET next Saturday, September 2. The XFINITY Series points leader, Elliott Sadler, is the defending race winner.

Always more fun to watch the Xfinity races when there aren’t a ton of Cup drivers/teams participating!

The Xfinity races are so much more exciting when the Cup regulars are in the field. Oh wait! Shot that theory all to pieces didn’t it? Funny we haven’t heard from Smarter Than You yet this week either? It must be killing her that the series puts on yet another great race without her hero Kyle and the rest of the Cup regulars stinking up the place.

Maybe Kyle was cheating in his Super Late Model somewhere?

Great to see an underfunded team win without the Cup Hogs. NA$CAR Xfinity will not survive if they keep feeding Penske, JGR, and JRM, all the big bucks.
Also nice to see sponsors on the regulars cars that the cameras never chooses to cover because they can’t afford the ad time.

Race of the year so far in any of the series. Road America always puts on a good show.