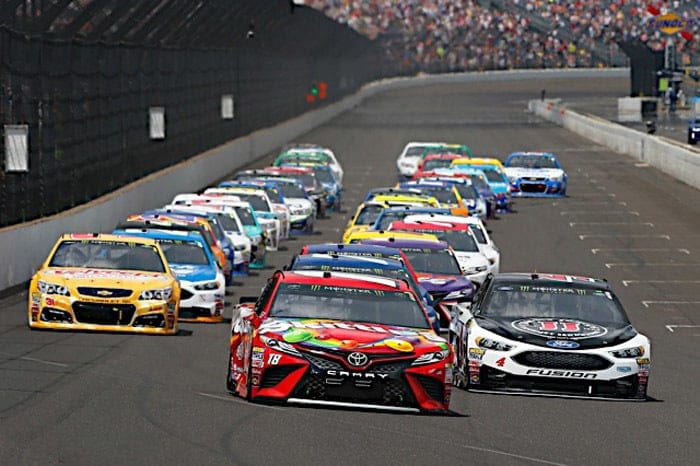 We’re exactly two thirds of the way through the Monster Energy NASCAR Cup Series schedule. 24 races are in the books leaving just 12 to go before we crown a 2017 champion.

Two unique tracks, Darlington Raceway and Richmond International Raceway, await us next before the playoffs begin. Given that for many drivers, now only a win will do, I’d say there’s a solid chance we might just see something crazy (or desperate, if you prefer) in the last two races of the regular season. The trouble for Cup drivers this weekend, however, is that Darlington is a track that doesn’t forgive even the slightest of miscues. There is, put another way, zero room for error. So despite a laundry list of big names that haven’t earned a playoff win (Joey Logano, Dale Earnhardt Jr., and Clint Bowyer, to name a few) their challenge to get over the hump will be a formidable one.

The off week for Cup drivers this past weekend was a welcome respite amidst an arduous schedule. For those in the thick of the championship battle, it proved to be valuable R&R time before the stretch run gets going in earnest. That change of pace will be the case from the very first corner of the 500-mile Labor Day weekend race.

A regular season points boost, paid out on overall standings before the playoffs begin, looks to be relatively set so expect the four stage points in the next two weeks to be hotly contested. I’ve been saying it all season long: those playoff points are really going to matter. Expect the action to heat up going forward.

What a victory it was for Jeremy Clements, driving his family’s car to an unlikely playoff berth. It was the first victory in a 12-year, 256-race XFINITY Series career for the Spartanburg, S.C. native. Father Tony is crew chief of the tiny, family-run organization. As for the driver himself? He works on the car during the week.

One of NASCAR’s post-race tweets summed it up nicely:

With just two laps remaining in the race, contact between Clements and then-leader Matt Tifft of Joe Gibbs Racing left both cars spinning. But Clements was able to recover quicker before third-place Michael Annett could catch up.

From there, he drove to an uncontested, unexpected, and hugely popular win.

ESPN’s Ricky Craven joined a host of others from the NASCAR garage taking to social media to express their effusive congratulations. They were well-deserved. I’ll leave the last words on this one to the winner from an ecstatic Victory Lane.

“I don’t even know what to say,” Clements said. “I’m just shocked.”

He’s got a series-best five wins in 12 races, including Sunday’s victory to open the second half of the Formula One season at Spa Francorchamps. Lewis Hamilton now sits in second place in the overall standings, closing to seven markers behind Ferrari’s Sebastian Vettel. The four-time German champion has won four times in 2017 and has looked a genuine competitor right from the get-go.

But he’s got company. Hamilton, a three-time champ, just missed out to former teammate Nico Rosberg in 2016. In trying to change that it was, all told, a great weekend for Hamilton who equaled Michael Schumacher’s record of 68 poles on Saturday. The milestone was then followed up by a hard-fought victory that tightened the title race.

“I did everything I needed to do but it was tough, which you’d expect. The Ferrari was quicker today,” said Hamilton of his vital win. “He was able to follow way too close and even on the pushing laps, he was able to stay within a tenth. There was no room for error. That was the smallest breathing space I had. I just had to keep them at bay. Just.”

Eight races remain before the champion is crowned in what is shaping up to be a F1 championship battle for the ages.

FOUR: Two to go for IndyCar

Just two races remain on the 17-race schedule of the 2017 Verizon IndyCar Series. First up, this Labor Day weekend, is Watkins Glen. That’s followed by the double-points season finale at Sonoma Raceway in two weeks. But whatever happens on the famed road course in upstate New York this next weekend, it’s very likely that multiple drivers will start the northern California road course with at least a mathematical shot at victory. It’s the fourth straight time the Sonoma circuit has hosted the series finale.

Perhaps the driver in the cat bird’s seat with two races to go is Team Penske’s Josef Newgarden. Three wins in the last four races (Toronto, Mid-Ohio and Gateway Motorsports Park) give momentum to the six-year, 98-race wheelman. Newgarden’s victory meant he left Gateway 31 markers up on second place Andretti Autosport’s Scott Dixon, a perennial championship threat) and up on all three of his teammates Helio Castoneves (third, -42 points), Simon Pagenaud (fourth, -43) and Will Power (fifth, -83).

But despite Newgarden’s momentum, with twice the points available in the season finale, gaps can be made up quickly. Just ask Juan Pablo Montoya, who lost a huge points lead in 2015 to the irrepressible Scott Dixon. It should be fun to watch.

FIVE: Livestreams in the Playoffs

Finally this week, a quick word on the recent announcement NASCAR will use Twitter to livestream an in-car camera for each of the ten playoff races. For me, this add-on is a great enhancement in keeping with the moves we’ve seen the social media giant make in other major sports. As NASCAR continues to appeal to a younger demographic, ideas like this one and special emojis for all 16 playoff contenders can only help.

Accessible for free and paired with a curated stream of Tweets, I’m figuring the in-car camera stream will be a popular addition to the playoff picture.

Yeah, special emojis for all 16 playoff contenders should really real those youngsters in. I don’t know how we ever followed a race without them.

I sure would like to know how many suckers they reel in because of the emojis!

@Bill B @DoninAjax — haha yeah, I should have qualified that better that’s for sure. : )