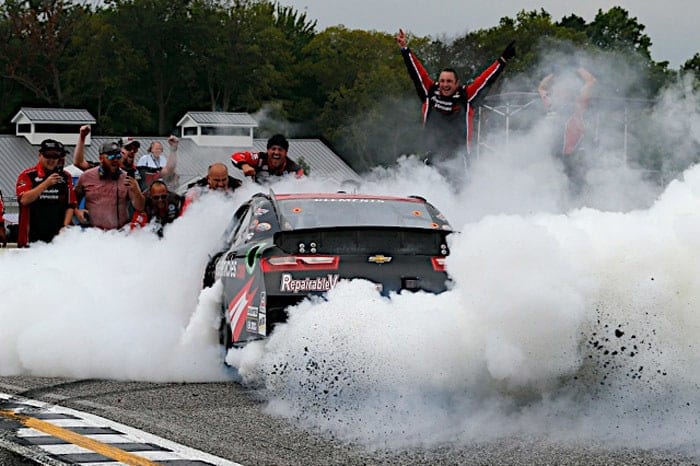 When the XFINITY Series headed to Road America last weekend, it presented a chance for a lot of series regulars. There was an opportunity to stand out, even potentially secure a playoff spot. It was a chance to shine up front without Monster Energy NASCAR Cup Series stars in the field.

Still, even without Cup interference a lot of well-funded teams wound up gunning for the win up in Wisconsin. They included Richard Childress Racing and previous Road America winner Brendan Gaughan; Joe Gibbs Racing with their young guns and aces; and JR Motorsports with its title contenders.

Sitting in the shadows was Jeremy Clements and his family-owned team, as they have been for the past several years.  The No. 51 operation is the definition of a small, underdog program.  Clements’ father works on the cars; the list of employees is lucky to hit double digits. Financially, the team scrapes together just enough backing to get to the track every week; their resources lag far behind the multi-car giants.

Despite those disadvantages, Clements has still shown occasional speed. But he’s ultimately been one of those drivers who could never quite get there at the end with the equipment he had.

The road there wasn’t without some drama. Clements spun with JGR young gun Matt Tifft in the closing laps as the two raced for the lead; Clements recovered, driving to the win while his rival was left in the dust.  It wasn’t intentional, and Clements apologized to Tifft, who understood.  They’re both racers, both hungry.

On Sunday, Clements was simply hungrier.

Moving forward, his win is more than just a feel-good story, or at least it should be.  It’s what the sport is supposed to be about: opportunity.

On any given weekend, a good driver in a decent car should be able to capitalize in the right situation. The equipment that they’re in shouldn’t matter; driving talent should still be able to make up the difference.

Clements did that Sunday in a car whose chassis was built nine years ago, a number that would mean the junkyard for a wealthier organization. It’s a clear sign NASCAR should be doing all they can to assure the health of smaller teams. They need to help them become competitive, because when they are, stories like this one result.

Standalone races for both the XFINITY and Truck series are a good place to start.  Sunday, with XFINITY in the spotlight, Clements made the most of his day. He wasn’t the only small-team driver to make the most of an opportunity, either. Parker Kligerman and Casey Mears, both former Cup drivers, finished in the top 10 for teams that only race the series part-time.

It was a great moment for a sport in need of some this season. However, defying the odds should be something that happens in racing more regularly. Sure, it can’t happen every week but it needs to be more often than it does now.

After the race, Clements spent what must have been hours individually thanking his Twitter followers for their congratulations.  Some drivers might respond to one or two well-wishers; Clements responded to dozens, and not just names from the media or the sport, though there were plenty of those, too.  He thanked them all, a trend that is nothing but good for NASCAR.

These drivers, fighting the odds for wins and top finishes, are the definition of the American dream.  NASCAR needs that to be alive and well among the wealth and privilege in the sport.  The sanctioning body needs to find ways to help them succeed because it only makes the racing better when anyone can win, or at least when fans think they can.

What that ultimately means is finding ways to help the smaller teams attract sponsors.  Standalone events will also make a difference in the NXS and Truck series because it takes the Cup drivers and a little bit of their backing out of the game.  The Cup Series itself can be a bit more difficult to attain parity because costs have risen so high. But as sponsors have priced themselves out of the game in recent years, it could be a good thing long-term for costs to be capped, allowing other companies to come in and back competitive cars at an affordable price.

When it all works? Sometimes, there will be a day like Sunday, when a talented driver is able to outrace the money and win by hard work and skill.  That’s the All-American story NASCAR needs to write.

@matt_tifft sorry for getting into you and spinning us both out!

I appreciate it man. Racing deal. We will get one soon but happy for your family team just wish it was a different circumstance! https://t.co/YO0Njvs84q

You guys do alot with a little. I can't believe your chassis was form 09. I really hope this win helps attract more sponsors.

These sort of ‘miracle’ wins are much more likely to happen when the Cup teams and drivers aren’t taking the majority of the top spots. Yet another reason to find a way to then out the ‘big boys’.