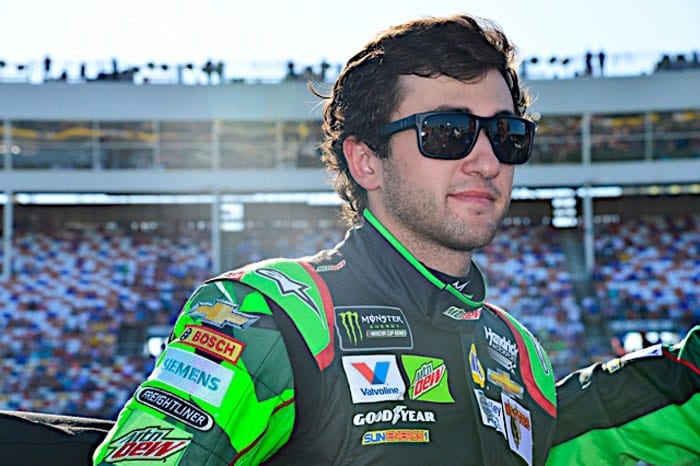 That announcement means Byron, who has driven the No. 9 in the XFINITY and Camping World Truck series, will drive the No. 24, a number Elliott has assumed since moving to Cup in 2016 to replace Jeff Gordon. Elliott, meanwhile, returns to the No. 9 he drove in his XFINITY days.

The move has some significance, as it means Elliott takes over the number popularized by his father Bill Elliott.

“I wasn’t sure I’d ever drive the [No.] 9′ again,” Elliott said in a team release. “It’s a huge deal to my family and everyone back home (in Georgia), and I hope all of our fans will be pumped to see it back on the racetrack. There’s a legacy attached to that number, and I want to carry it on. I think it’s awesome that Hendrick Motorsports and NAPA wanted to do this. It’s impossible not to be excited.”

Added Byron, who will become the second rookie to pilot the No. 24 since Gordon’s retirement (a streak that stretches even further since Gordon himself was a rookie when he began driving the number): “Jeff and Jimmie (Johnson) are the drivers I’ve always watched most closely and tried to learn from. I didn’t think I could be more motivated, but when Mr. (Rick) Hendrick called to tell me (about driving the No. 24), it took things to another level. I have so much respect for all the people who have contributed to the success of the [No.] 24. I know it’s rare to have the chance to be part of something like this. I’m going to make the most of it.”

The addition of the No. 9 to the series means Hendrick Motorsports will not field the No. 5 full-time in 2018. The car has been driven by Kasey Kahne, who will be replaced by Byron on the team’s roster for 2018, and was Hendrick’s first car number when the team entered Cup competition in 1984.

“That was by far the hardest part,” team owner Rick Hendrick said. “The [No.] 5 means so much to everyone at Hendrick Motorsports and to a lot of our fans. The memories and the history will always be there, and I won’t rule out bringing it back some day. Never say never.”

Despite the number switch, Elliott’s current No. 24 crew will remain with him in 2018, while Kahne’s No. 5 crew will stay with Byron at the No. 24.

The change means only one team, driver and number combination will (currently) remain intact at Hendrick for 2018: Jimmie Johnson’s No. 48. Alex Bowman will pilot the No. 88, taking over for the retiring Dale Earnhardt Jr.

I have to say I’m not really a fan of this. I understand Elliott wanting the family number, but all this build up to make him the heir apparent to Jeff in the 24. It was natural to root for Elliott in the 24, in that I could still wear my old Jeff stuff to the track and rep both. Now that’s out the window. I’m guessing this is more Byron’s sponsors wanting the 24 number, especially Axalta.

Who gave up the number 9 so Hendrick Motorsports could use it? I thought Melling owned it or Lake Speed.
Does Teresa still own the number 8. She gave up the #15 to MW almost immediately.

This is great news for all the Chase Elliott fans that invested in their driver. Two years and their t-shirts are already obsolete. Now they get to buy more stuff!!!! Although with the way sponsors change so much now days, two years might be the norm.

Dammun! How freaking manipulative can they be to the Sheeple? He wasn’t getting it done in Jeff Gordon’s fabled car, so now we will have the Sheeple thinking it is DADDY doing circles around the track. Much like the Sheeple of Junior Nation think it is Sr. every time Jr. completes a lap! Utterly shameless and predictable. Pandering fools.