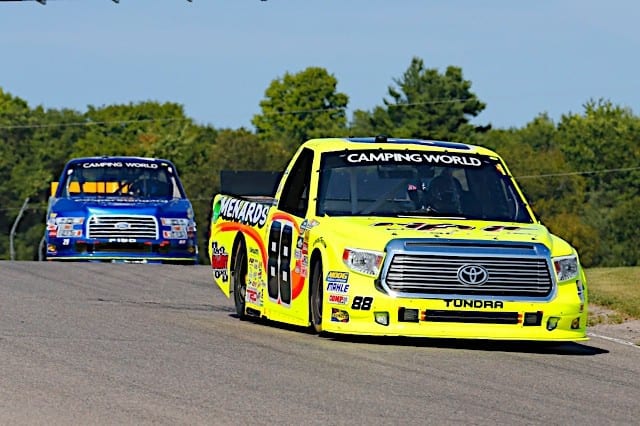 While the Monster Energy NASCAR Cup Series and NASCAR XFINITY Series are at Darlington Raceway, the Camping World Truck Series will have a standalone event north of the border.

The CWTS stars will head to Canadian Tire Motorsports Park for the Chevrolet Silverado 250 on Sunday, Sept. 3. 33 trucks were originally entered attempt to qualify for the 32-truck field.  However, the No. 44 team has chosen to withdraw.  As a result, no one will fail to qualify.

Last year, the race provided an electrifying finish, with John Hunter Nemechek aggressively overtaking Cole Custer in the final corner to claim the victory. Nemechek returns to defend the race trophy and his father, Joe Nemechek will drive NEMCO Motorsports’ No. 87 entry.

As always, any time NASCAR makes its way to a road course, there are some road ringers that show up to compete. Brian Wong will pilot MDM Motorsports’ No. 99 Chevy. Wong has one CWTS start to his credit, at CTMP two years ago.

Earlier on Wednesday, Young’s Motorsports announced that Alex Tagliani will drive the No. 02 Chevrolet at CTMP with primary sponsorship from Spectra Premium.  Tagliani has two career Camping World Truck Series starts, both of which came at CTMP for Brad Keselowski Racing.  Tagliani started both races from the pole, earning a fifth-place finish in 2015 as his best run.

Tommy Regan returns to the series to climb into the No. 0 Chevy for Jennifer Jo Cobb.

While most of the drivers will need their passports handy for this weekend, Ontario native DJ Kennington will attempt to defend his home turf. Gaunt Brothers Racing, who field Kennington in the the Daytona 500 earlier this season, will put the two-time NASCAR Pinty’s Series champion in its No. 96 Toyota.

Kennington won at the CTMP in the Pinty’s Series in 2011.

Todd Gilliland will make another start in Kyle Busch Motorsports’ No. 51 entry and Parker Kligerman will once again trade in his NBC microphone for the steering wheel of the No. 75 Toyota for Henderson Motorsports.