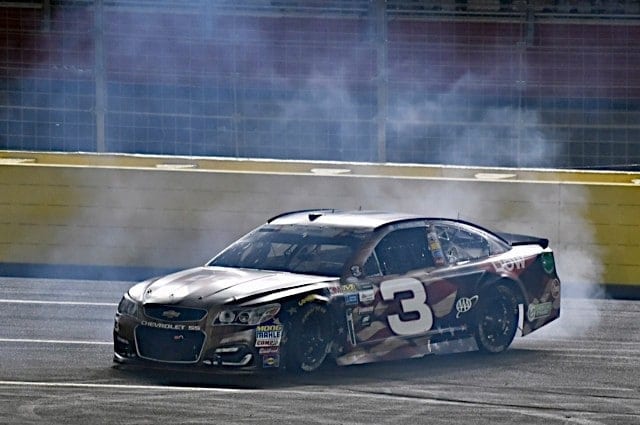 With the announcement Chase Elliott is going to pilot the No. 9 car next season, his father Bill Elliott’s legendary number, the talk surrounding NASCAR retiring numbers has ramped up once again. With the No. 3 and No. 43 still on track every week and the No. 24 seeing it’s third driver in four years, it raises the question…

NASCAR is the only major American sport not to retire numbers. And it’s a damn shame.

I get it, I get it. Dale Earnhardt told Richard Childress himself, before he passed away, that he’d like to see the No. 3 racing in the sport a long after his time. And Richard Petty is still in the sport, at the track every week and puts the finding together to run his famed No. 43. But it’s never felt right to me.

I might be in the minority, but growing up watching NASCAR, I never saw the No. 3. For a couple races when I was a toddler (that I don’t remember), I watched “The Intimidator” wheel his black Chevrolet around the track and wind up in Victory Lane. And I’ll always associate Earnhardt with the No. 3, even if my whole life has seen Austin and Ty Dillon race in it.

I never saw the No. 43 up front, either. What’s happened since I’ve been watching NASCAR in the No. 43 car besides a flurry of driver changes, manufacturer swaps and sponsors? One win by Aric Almirola at Daytona that was rain-shortened. Big whoop.

No disrespect to the Dillon boys, Almirola or anybody else whose driven the iconic cars throughout the years, but it’s time for NASAR to start retiring numbers for one main reason: to preserve history.

So how about this? Retire a number, and give them a reason to.

If NASCAR were to retire numbers, they would be preserving history that the younger fans don’t know too much about, and preserving the history the older generation of fans gravitated to and loved.

This, of course, begs the question: what constitutes retiring a number? Well, that would vary, of course.

What I would propose is a voting panel made up of drivers, media and one vote counting for the fans, similar to the format that the NASCAR Hall of Fame uses in electing their classes. But rather than getting a majority like other sports into the hall of fame, I propose this vote to be unanimous.

An argument that is frequently made is that there aren’t infinite numbers to be raced on cars. There were some triple digits raced in the mid 1900s by legends, but none have graced a race track in a few decades. So realistically, there are 110 numbers to be used (No.’s 0-99 and No.’s 00-09).

There ain’t no way in hell that there will be more than 15 numbers retired by the sport, at most. I’m talking legends, here. Not just Hall of Famers. I’m talking drivers that have transcended the sport and have made their park. Earnhardt, Petty, Johnson (when his time comes), Gordon perhaps, and maybe some more.

Retiring numbers should be reserved for the “G.O.A.T.’s” and not the upper level drivers. And there’s no better time than right now to start. – Davey Segal

What’s In a Number?

One thing that makes NASCAR unique from other sports is that numbers do not get retired.

Teams can agree not to use a certain number for a while, such as the No. 3 after Dale Earnhardt’s death, or the No. 28 after Robert Yates Racing shut down, but every number is still available should a team purchase the rights to it.

This is the way that things should be in NASCAR. Numbers should not be retired.

First off, who’s number would you retire?

Say each driver in the HOF had their number retired; you would run out of numbers eventually.

I do not want to ever see a triple digit number in NASCAR. It would be too confusing, as well as a nuisance to read on the door panel or the scoring ticker. I have a hard enough time reading two numbers when the cars are traveling at 200 miles per hour. Do not even get me started on how quickly FOX and NBC move the scoring ticker so that they can hurry up and throw another sponsor at the top of the screen.

I am guessing each legendary driver would have the number retired that they were the most successful in. For example, the No. 3 would be retired for Earnhardt instead of the No.2.

Then there comes the question of what to do about a number that had multiple drivers have their best years in it. Ned Jarrett, Cale Yarborough and Darrell Waltrip are all HOF members and all of them had their best years while driving the No. 11. If any number should be retired then it is the No. 11, but in who’s honor do you do so in?

I love the stat that the No. 11 has more car wins than any other number because it was done by a wide combination of some of the best drivers ever, unlike the No. 43 and No. 24, which have most of their wins by one driver.

A stat like that encourages people to look up who the other drivers were that drove that car and educate themselves on the history of the sport. If you never see the number that the heroes drove, then you forget about them.

Retiring numbers would also eliminate family numbers. When I think of the Petty family, I think of Nos. 42 through 45. If numbers were retired, then the Petty’s would be unable to use three of those numbers. The sole remaining one would be No. 45, and when I see that number, it only brings sadness to me as I think about the tragic too-soon death of Adam Petty. I would not think of Richard Petty and his 200 wins, or Lee Petty winning the first ever Daytona 500.

Every time I see Aric Almirola, I think of The King. When I see Kyle Larson flying around the high side, I think of Lee and Kyle Petty.

If numbers were retired, then Chase Elliott would not be able to switch to his father’s old number. He would not have taken over the No. 24 to start with. Instead, he would have ended up in No. 924 or something to that effect.

NASCAR’s throwback weekend at Darlington Raceway is an awesome tribute to the greats and their numbers. That would not be possible if numbers were retired.

Let’s stick with the system NASCAR has in place. If a team does not want to use a number out of respect for someone, then that should be their call. Do not start officially retiring numbers now. – Michael Massie

The only reason I feel the #3 should be retired is because the man who made the number famous died wheeling it. As long as King Richard wants his number on the track, then it should still run. Nothing personal, but having the #3 on the track now has shown me that it’s easy for it to become just one of the pack instead of holding a place of honor. I’m sure many will disagree, but that’s fine. Only numbers with an exceptional history should be considered for retirement.

I’ve said all along that the 3 should be retired cause the driver that made the number what is was/is died in a race on the track. if dale had retired, the it would be just like the 24, the next person in the seat gets the number.

not sure about the current 24 to 9 and the current 5 to 24. I just think of all the people that have bought 24 napa stuff for chase Elliott will have to purchase new stuff next year.

Dan Gurney didn’t have any problem being scored in the 121.

A number is just that–a number. It’s not the racer or the man. As was said, some numbers were great because because of numerous drivers being successful. Folks need to keep in mind that it was never the number that won races; it was the driver/car combination. No one ever won because of the number painted on the side.

No one driver is responsible for a number…there were other driver’s identified with the 3…in another era. There have been 82 drivers that have used the number 3, just a few are: Tim Flock, Cotton Owens, Fireball Roberts, Junior Johnson, David Pearson, Cale Yarborough, Buck Baker, Fred Lorenzen and Dale Earnhardt.