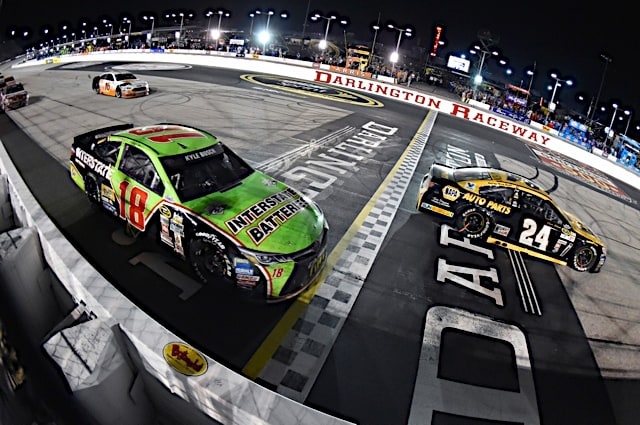 Who Will Channel Their Throwback Legend in Darlington?

Second to maybe the Daytona 500, no other race nowadays has quite as much anticipation and lead-up than the Southern 500.

Returning to the Labor Day weekend date in 2015, NASCAR, Darlington Speedway and the whole clan came together to celebrate the sport’s past by showcasing historic, fan-favorite paint schemes for the weekend.

With both Monster Energy NASCAR Cup and XFINITY series drivers racing throwbacks this weekend, who will channel their throwback legend the most?

If we’re talking legends, especially at Darlington, we have to start with David Pearson, as the Silver Fox claimed 10 victories at the South Carolina track, including another sport record of 12 poles.

Jamie McMurray will be paying tribute to the Hall of Famer this time around, driving a red No. 1, the same number of scheme Pearson drove to his final track win in 1980. Speaking of last wins, it’s been a while since McMurray has captured one, as he is slowly approaching four years since his last Victory Lane trip. Despite only two top fives this year, consistency has been his make, with 12 top 10s and a solid standing in the playoffs with two races remaining. With a decent track record as well, will McMurray repeat Pearson’s quiet demeanor or tough-to-tame tenacity?

Another driver racing in a legend’s shoes — and who by now may be used to the moniker — is Brad Keselowski, who will again pay tribute to Rusty Wallace. The two share more than the same car number with the same team, but neither have won at Darlington despite hundreds of laps out front. Keselowski, who dominated the Southern 500 in 2015, came up short to Carl Edwards, finishing second after leading 196 laps. At this point of 2017, Keselowski and Team Penske are close to needing a boost of heart in time for the playoffs.

And finally, Chase Elliott is running the scheme his father Bill ran in his first Cup start in 1976. Elliott, who will drive the No. 9 in 2018, is down to only 12 chances to get a victory in the No. 24 before William Byron takes the wheel next year. Perhaps it’ll come Sunday at the track where his dad won five times.

Will Denny Hamlin Sweep the Weekend?

Denny Hamlin is bound to continue the success for car No. 11 in the Cup Series this weekend. Running the “flying” No. 11 scheme raced by Ray Hendrick, who won more than 700 races throughout his racing career, Hamlin enters one of his best tracks of the season in Darlington. Despite winning only once back in 2010, the Joe Gibbs Racing driver has finished top five in four of the last five races at the track, including two runner-up finishes in 2012 and ’13.

Overall, Hamlin has led 427 laps and has only twice finished worse than 10th. Additionally, he has completed every lap in all 11 starts dating back to his rookie year in 2006. That’s rare coming at a track as tricky at Darlington.

But his success even spans to the XFINITY Series, where he will run the No. 18 for JGR on Saturday. On that side of the garage, Hamlin has a remarkable run going; seven straight top-two finishes, winning four and finishing second in three while leading nearly 500 laps along th — way.

After coming up short to Elliott Sadler in a mad run to the end last year, Hamlin hopes to channel his inner Kyle Busch, that is, sweeping a NASCAR weekend.

Is Austin Cindric the Favorite for Canada Truck Win?

Though the top two series are in Darlington this weekend, the Camping World Truck Series enters its one and only road course event of the year, north of the border in Canadian Tire Motorsport Park.

With a fresh entry list compiling the likes of Alex Tagliani, DJ Kennington and Todd Gilliland, one driver is expected to bring the heat from the drop of the green: Austin Cindric.

Hot off his XFINITY Series debut last week at Road America, where the teen finished 16th from pole position, road racing has been his strong suit from the start, with a sports car background giving Cindric the proper know-how.

Entering CTMP, Cindric is expected to perform well based off his background, as well as his near-result from last year, running third before getting spun by teammate Daniel Hemric in the final corner. In that same race, he qualified second in what was only his fourth series start.

Will Cindric return with even better speed? 2017 got off to a slow start for the Brad Keselowski Racing rookie, but the tables have turned, with Cindric having six straight top-10 finishes coming into CTMP.

But a win on Sunday will mean more than a victory last year, as his playoff chances are in doubt, sitting 55 points behind the cutoff with only two races to go.

With Full Weekend of Racing, Which Will Be the Best Race?

This weekend is one of those special weekends for an all-around racing fan. The Southern 500 in Cup, the XFINITY Series, Trucks, Verizon IndyCar Series at Watkins Glen International and Formula 1 at Monza. Altogether happiness fit for a holiday break.

Racing at four varying racetracks with packed fields of hungry talents on different levels, which will see the best race? It’s tough to compare a Formula 1 race to a NASCAR race. One has a 40-car field with multiple racing grooves, stage racing and nearly 20 cars with a solid shot at winning. The other has 22 cars, bone-chilling speed and a full-season championship with the intrigue of dreamers: Ferrari and Mercedes.

But this weekend, they go hand-in-hand, as each has one of their crown jewel events to tackle on Sunday. For F1, the Italian Grand Prix in Monza dates back to 1931 and has seen some of the sport’s premier moments like the sight of the Tifosi cheering on a Ferrari winner, like Fernando Alonso in 2010 or Michael Schumacher in 2003. Or perhaps the fastest lap in F1 history may get your attention, as they came from Juan Pablo Montoya in 2004.

Monza has all the delicacies one could ask from from the world’s motor sport: glamour, season-high speeds and iconic corners — and with a race that has been won from pole 14 of the last 19 times, being the quickest is paramount at Monza more than any other.

For NASCAR, Darlington packs a similar punch, standing as only the fifth 500-mile race of the season, and has some of the sport’s iconic moments within its walls: Bill Elliott winning the Winston Million in 1985, Ricky Craven edging Kurt Busch in ’03, Regan Smith bringing the first win to Furniture Row Racing in ’11, etc.

The style of racing is also unique, as the visuals of watching the drivers dare to sniff the turns 3 and 4 walls is a sight to be seen.

Then you can factor in IndyCar at Watkins Glen, a track known for great racing in front of an even better crowd of fans. That race broke a six-year hiatus last year and showcased the raw speed from Indy cars compared to stock cars.

Lastly, the Truck Series is known to be just like XFINITY and Cup when it comes to road racing: awesome. The last corner has been particularly interesting, giving us a jaw-dropping moment nearly every year since 2013.