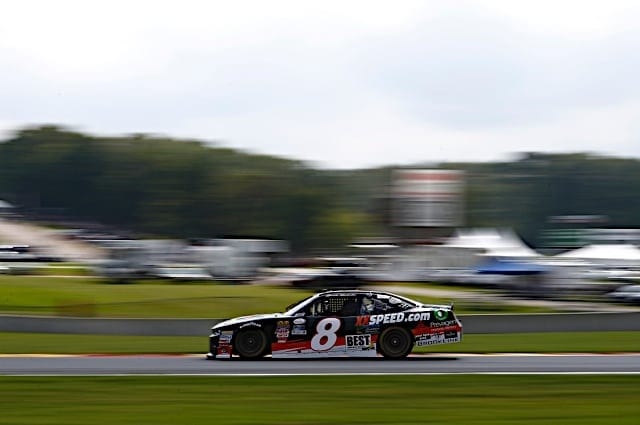 One month ago, the name Josh Bilicki might have been ignored, having only competed in four career XFINITY Series races, only one of which had come in 2017. But coming off a career-best 12th-place finish at Road America, the road course veteran is trying to work his way up the proverbial ladder of NASCAR.

Bilicki, 22, is a hard-nose racer, racing since he was four years old. At 15, he made the move to Sports Cars with Spec Miata and the Sports Car Club of America (SCCA). Prior to coming to NASCAR, his biggest move might have came while jumping over to the IMSA Continental Tire Sportscar Challenge in 2015.

Last year, Bilicki made his XFINITY debut at Road America, a place where he has turned “thousands” of laps. That day, competing with Obaika Racing, he came home 38th. He would have two other races for the organization finishing a season-best of 28th at Phoenix International Raceway.

This year was a fresh start for Bilicki, as he increased his involvement with being a driving coach, most recently guiding Dalton Sargeant and Shane Lee prior to last weekends ARCA Series race at Road America. However, to his own credit, he picked up B.J. McLeod Motorsports’ best career finish on a road course.

And Bilicki knew he had a good car going into the weekend .

“The car started off really tight in the race just because of some changes that we made,” Bilicki said of his finish. “But just about halfway through the race, we made some adjustments and the car started to come alive. As soon as I started running down Elliott Sadler around lap 30, I knew we had a fast car.”

A fast car indeed, finishing two positions ahead of Sadler, the series points leader and one position behind Phoenix winner Justin Allgaier.

Bilicki, who made his first career Monster Energy NASCAR Cup Series start at Sonoma Raceway in June, knew driving the twist and turns would be more challenging than other series that he’s driven in. However, with finishes of 28th at Watkins Glen International and 29th at Mid-Ohio Sports Car Course in the XFINITY Series, the Wisconsin native realized it was harder than he first thought.

“The drivers in NASCAR can be really aggressive and that is what hurt us at Mid-Ohio, just the aggressiveness of the other drivers,” he said. “The first half of the race [Road America] we played it safe and the second half we went for it. Being the last road course, we really wanted a good result and B.J. [McLeod, team owner] told me ‘don’t be afraid to tear the fenders off the car.’ Which luckily we didn’t.

“I think it’s just playing it safe around other drivers, even coming up to Elliott Sadler. I want to show him my respect, I don’t want to race him really hard and bump fenders with him, we’re only racing for 12th, we’re not racing for the win. I think it’s important to show these guys respect and they will show you respect back.”

Working with McLeod has granted Bilicki the opportunity that he once dreamed of– a competitive ride in NASCAR. And because of that, the elder statesman of the group has taken the fresh-faced driver under his wing since coming to the XFINITY Series.

“B.J. has been very influential,” Bilicki said. “I’m luckily to have driven for him and we have several other races that we are planning to do this year. Instead of jumping around from team to team and learning each new chassis, learning how to work with the crew, it’s really nice to work with the same crew. B.J. and I have a similar mindset, so I think that’s really helpful.”

McLeod has driven in 17 of 23 events this season, taking himself out of one organization’s rides for the trio of road courses in August. He has given drivers such as Bilicki, Tommy Joe Martins, Matt Mills and Stephen Young the ability to step in, while he focuses on the owners side.

B.J. McLeod Motorsports is not running on the same budget as the elite teams of the XFINITY Series are, which makes the drivers set a different stand of expectations. Competing for wins are not always a guarantee, which makes the top-15 finishes that much more rewarding.

Bilicki, who was once competing for championships in the Continental Tire Series, it’s been an eyeopening experience to run mid pack, though he is living out that childhood dream.

“I think the biggest change is just going in with the mindset of ‘hey, we’re probably not going to win this weekend unless something magical happens, but let’s do all we can to get the best finish we can,'” he said. “I think that’s the biggest change, just going into the mindset of we want to win this race and gain maximum points, though we want to get the best finish and bring the car home clean and gain maximum points.”

Competing in a variety of different series throughout his career Bilicki has his mind set on NASCAR. This is where he wants to be for the foreseeable future.

“Right now, NASCAR is my goal,” he confirmed. “I want to secure a seat full-time in the XFINITY Series and then hopefully we can go to Cup a couple years after. I think racing with B.J. is perfect because I would rather learn these tracks in a good mid-pack car than bump up to a really good car and just make myself look silly and only running 10th to 15th. I think it’s more important to drive a decent car fast than it is to drive a fast car slow.”

The only thing stopping the Wisconsin driver from participating in more XFINITY events is funding. As with every team, sponsorship is the contributing factor to who is and who is not in a racecar.

He assures that he’s the one making phone calls and hoping on a computer every day to try and find that perfect fit. But until then, with his remaining opportunities this season, he wants to make the most of them, hoping for a full-time ride next season.

“That I can go to a track and be competitive, especially in the equipment that I’m in,” Bilicki said of how he wants to impress team owners. “If the car is usually finishing between 25th and 30th, I want to finish 15th to 20th. I want to show team owners that I can compete with guys that are spending higher budgets than us and when I get to cars that are better or teams that are a little bit better that I can compete for the win.”