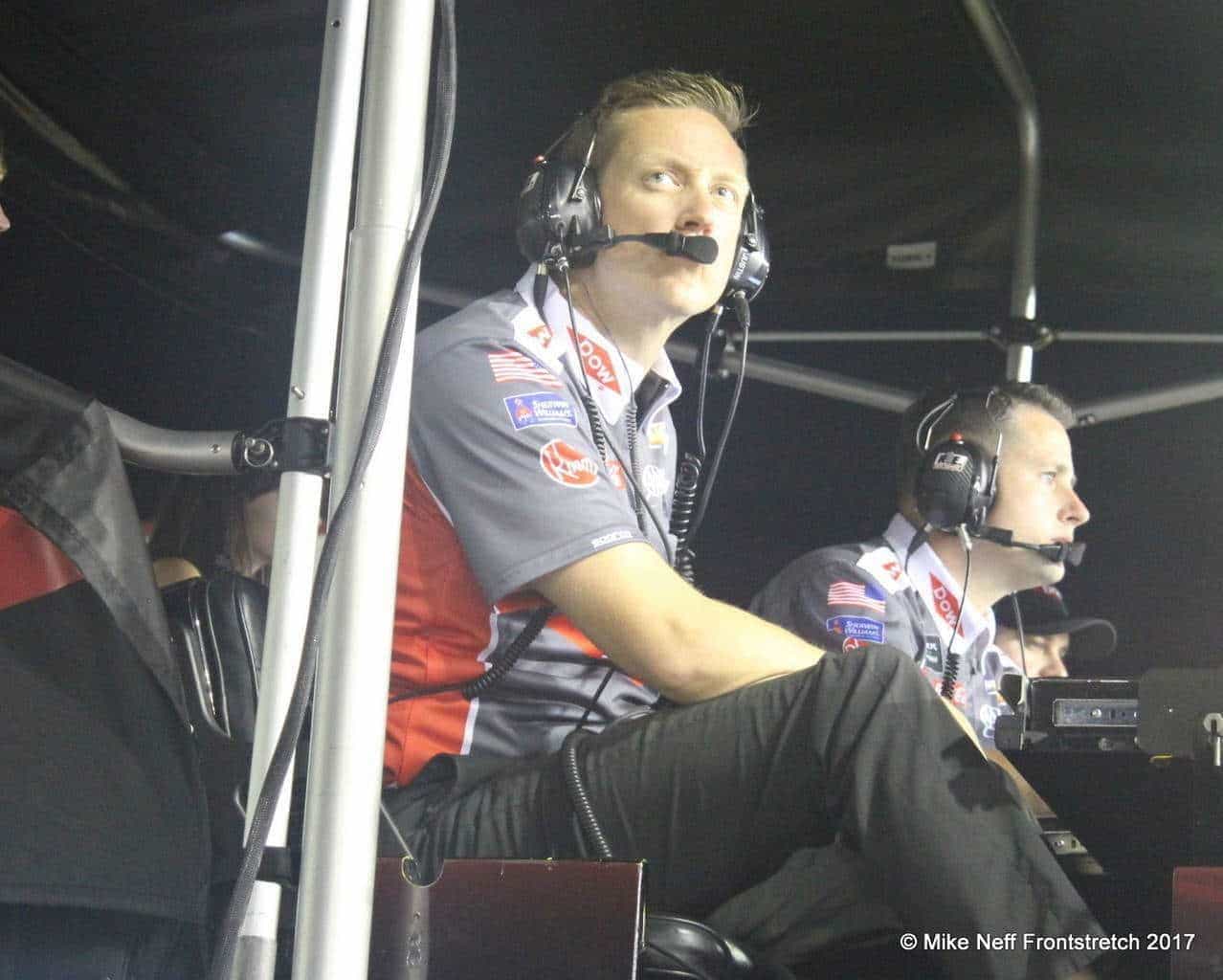 Some drivers went to Europe for their off-week, some folks got lost in the woods on four-wheelers, while others stayed home and did honey-do lists.

The latter is where Justin Alexander found himself. The crew chief of the No. 3 Richard Childress Racing team driven by Austin Dillon rarely has a day at home, so he took full advantage of the time away from the track to get things done at home. Now he’s geared up for throwback weekend at Darlington Raceway and will be sporting some epic throwback garb as part of the festivities.

Heading into this weekend, the challenge lies in making the most out of the tires that Goodyear is bringing to the track. Alexander touches base on a few topics in this week’s Tech Talk. The aero package for this year is quite similar to the experimental package run in 2016, so teams are going to have a feel for what their cars will do when they come off of the truck. Tires are going to be at a premium, suspensions are going to have to be pliable enough not to destroy the slicks and the strategies are going to be all over the board. Alexander also talks about preparing for the playoffs and 2018.

Mike Neff – What were you able to do as part of your vacation? Did you go to France with Ryan Blaney?

Justin Alexander – No, although I saw one of his posts on Twitter. I don’t get to spend a lot of time at home, so honestly I spent the entire week [there]. Most of the weekend and part of the week just at the house hanging out, getting stuff done that I usually don’t get to do because I am normally at the house one day a week maybe. Really about half of a day each week. I didn’t do much. We just stayed around Mooresville, hung out and got a lot of stuff done around the house.

Alexander – It is fairly close. It is still going to be good. Darlington is such a unique track, and it is one of my favorite places to go. There really isn’t any place else like it that we go to. It is a worn-out track, and it wears tires out really fast. Tires become a huge commodity at Darlington. Any time you go to a place like that it always makes for a great race when you have a ton of fall off with the tires. We slow down so much over the course of a run that it makes for a really great race. Strategy comes into play, guys can short pit and really make up a lot of ground. It is just cool track; it is fun and a unique place. I think the racing will be just as good this year as it was last year, and the packages should be very similar. Looking forward to getting there, really.

Neff – Last year tires ended up not being an issue because you had a couple of long runs late in the race, but early in the race, around the halfway mark, a lot of guys were worried that they might run out of tires. Has NASCAR told you what your allotment is for this weekend?

Alexander – We will have 12 sets of stickers and the qualifying set that we’ll start on, so 13 total sets. That means we have to run 28 laps per set, which at Darlington is a lot. It really isn’t that much considering we can do 60-65 on fuel, so it is about half of a fuel run. Darlington is one of those places where if you have four lap fresher tires, you’re going to blow right past people. So any time the caution comes out, the drivers are going to want four tires, and we’re going to want to put four tires on it.

The way it worked out last year and the year before that, it really becomes a tire management race. Early on you can’t pit every time you have a caution. Last year, it went green for a good while early in the race, and that really helped guys save on tires. Then later in the middle portion of the race, cautions started coming out left and right and guys really started using up tires. It is fun, it is challenging for us to call a race there. Drivers want four tires every time the caution flies. Sometimes you can give them to them and sometimes you can’t. That is another reason that makes Darlington so unique.

Neff – We’ve been talking about stage racing all year, but it seems like it is at an extra premium when the tires fall off so much. What is your vision for your strategy for Sunday night?

Alexander – Well, the first thing you look at is what you’re trying to accomplish. On the No. 3 team, we’re locked into the playoffs, so we have Darlington and Richmond Raceway to go out and build some momentum and win some stage points and win races. We’re not fighting for points, we’re not trying to point race. For us, in the big picture of things, we’re locked in so we’re going to go out, being aggressive, trying to win stages and win races. Points [are] really not a big concern for us. We’ll start there as far as strategy goes.

Stages are at 100 and 200, so we’ll start there and work our strategy around that. We can short pit if we want to, we can run long if we want to. We can work a variety of different angles to win the stages and do whatever it takes to win them and then go on to win the race. That is our goal, to go there, run well and build some momentum going into Chicago[land Speedway].

Neff – The track is a bit on the worn-out side, but it doesn’t seem to be that bumpy. Does that give you an opportunity to be aggressive with your bump stops, springs and shocks, or do you have to back off that a little bit to try to save the tires?

Alexander – Darlington is becoming more worn out every time we go back there. It does have some bumps, especially off of Turn 2, it is fairly rough. I think they have tried to patch it a little bit. I won’t say they haven’t done a good job, but it is still rough. Our teammate car, the No. 31, tested there a few weeks ago for a Goodyear tire test. So we have a lot of good data heading to the track this weekend. There are bumps there that we have to deal with so we can’t get super aggressive at Darlington with the bump stops and springs like you would at Kansas [Speedway] or Michigan [International Speedway], which are really smooth racetracks. That does come into play, what we do with shocks and springs and all of that. It is fairly rough, so we do have to accommodate that.

Neff – How far along the line are you in preparing your playoff cars? Do you have the first two or three ready, or are you holding off thinking you’ll learn a little more between now and Chicago?

Alexander – Things constantly change. We learn something every week. We are in the wind tunnel every week. We learn things from the seven post rig every week. As far as stuff like that, racing is constantly evolving, and we’re always ready for change. As far as chassis go and major things like that, we’re already planned out with that. Some cars are already built and being finished. Others are in the works right now. I’d say we’re ready through Dover [International Speedway] right now, the first three races. We’re close to having everything ready for the playoffs although we probably have another week before things are all buttoned up. We have the bigger picture things done, and all of the minor stuff we are constantly tweaking on the bodies and cars and everything we can do to make the cars faster. That’ll never stop. We feel like we’re really ready heading into Chicago. We just tested at Chicago two weeks ago. We had a good test up there and we’re ready for it. Everything went well and we’re looking forward to getting there.

Neff – Looking ahead to 2018, we have the foot box that was implemented in superspeedway cars this year that is supposed to be across the board next year. Teams were allowed to implement it this year, but it was extra weight so it seems like most teams wouldn’t have done that. Have you already laid out a plan on how you’re going to implement that across the fleet of your cars or will you deal with it after Homestead?

Alexander – It is something we’re keeping an eye on. You do get a weight break when you run the reinforced foot box. It is obviously extra weight, so NASCAR does give you a weight break. That is something that is more long term planning stuff for next year. Personally I’m more focused on this year, especially with the playoffs coming up and worrying about this year. So I’m not too concerned with that at the moment. There are guys at the stop who do plan things out longer term, and those guys are working on that stuff and getting those things prepared. You know we have a new body coming out for Chevrolet in 2018, so that in and of itself should be a good thing. We’re working on that and we have a lot of good stuff coming for next year and definitely looking forward to that.

Neff – Last year the No. 3 team had some pretty epic uniforms for this weekend for the whole team. Is there anything that you can share with us in advance of this weekend that we can look forward to out of the No. 3 squad?

Alexander – Yeah, we have a good throwback scheme on the car. I think it is online somewhere that you can see it. We have some cool uniforms with some throwback hats. We’re going to be in full gear. We’re now trying to decide if we’re going to run full mustaches or do something different like that. We’ll be in full gear, and we’re looking forward to it. It is always cool going down there and seeing all of the different cars and paint schemes that everyone is bringing. It will be a great atmosphere for sure.