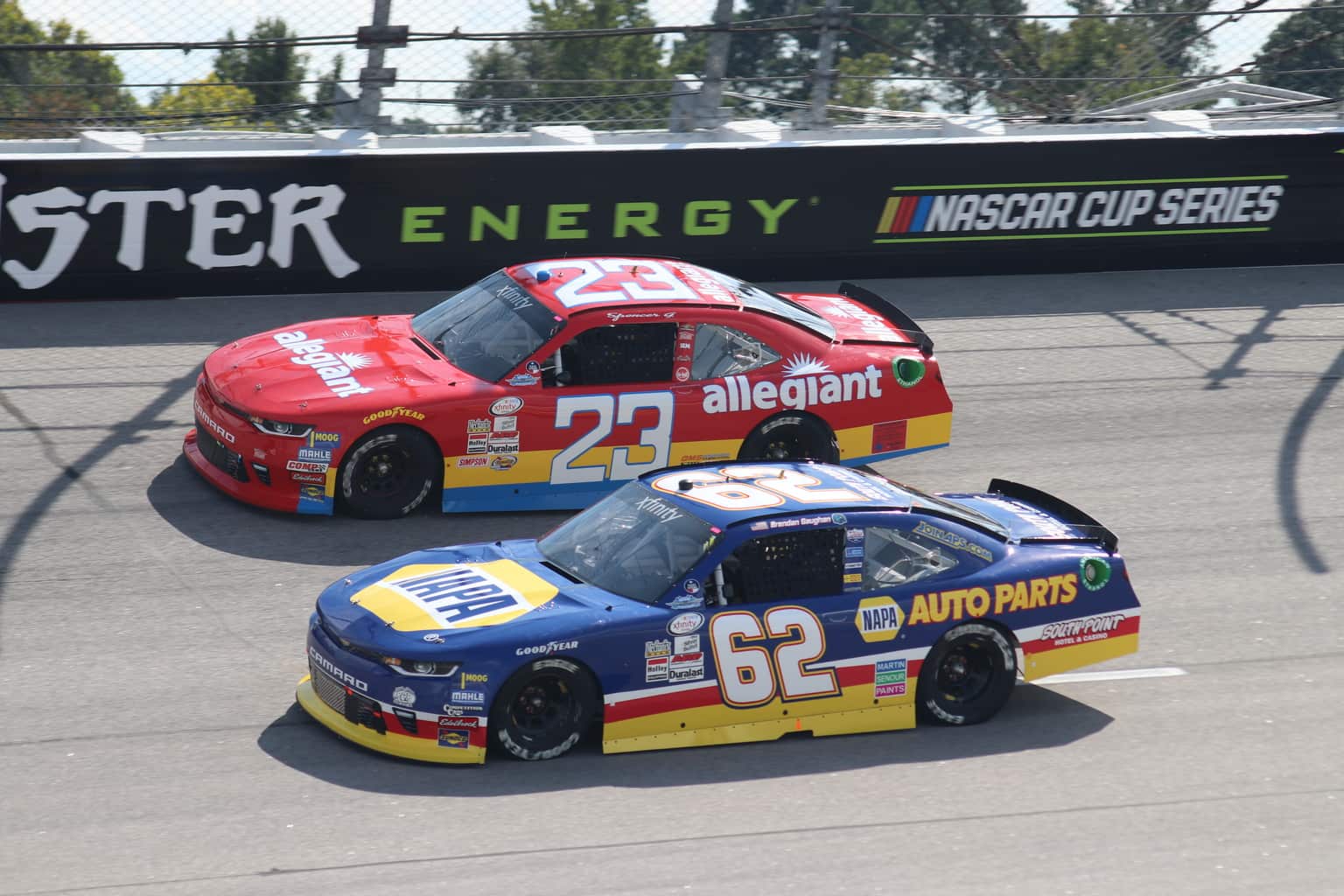 It’s crunch time. No, not that kind of crunching—the Lady in Black was actually fairly kind to the XFINITY Series during Saturday’s Spot Clips Haircuts VFW 200, though the series point leader certainly felt that kind of crunch as well.  It all comes down to one race to go to make the playoffs.

Elliott Sadler entered Darlington with a substantial 107-point lead over William Byron.  That’s more than a full race worth of points, so he leaves with the lead as well, even after crashing on a late restart off the front bumper of Erik Jones. Sadler will hold the lead until Friday night in Richmond when it all goes away thanks to the playoff reset.

But Sadler is safely in the championship hunt with one race to go in the regular season, a luxury which many XFINITY Series regulars don’t yet have.  Just four drivers have won their way into the 12-driver field, leaving the rest of the regulars to make it in on points.

While it can be argued that having just four different winners among series regulars is a bigger problem for the series than who gets into the playoffs, to the teams, the pressure is on to secure a spot.  A win at Richmond is a possibility of course, though unlikely based on this year’s history in companion events.

The stage points system, which should help some drivers who use good strategy to gain points, has been problematic in that unlike in the Cup Series, where ineligible drivers rarely, if ever, finish in the top 10 in a stage, it’s frequent here.  On Saturday, just four drivers earned stage points in the first stage, and in the second, five drivers earned points, but none better than fifth place.

Of 48 possible stage wins available through 24 races, 19—less than half—have been taken by series regulars, with 15 of those by drivers running the series full-time.  That means 330 total points were taken off the table, along with 33 playoff points.

It’s easy to point to the Cup drivers as the problem, and they’re certainly part of it, but a big part of it is also that unlike in the Cup Series, the stages in NXS aren’t long enough to warrant green flag pit stops.  There were zero pit cycles under green at Darlington.  And no pit cycles means no strategy for finishing positions in stages.  Pitting early in order to stay out under the caution is too costly—drivers will lose a lap trying it, and while they may get a wave-around at the end of the stage, that doesn’t buy them track position.  The result is a field that gets spread out and stays that way on the intermediate tracks, and that means little opportunity to pass and earn points, except on restarts. And even if a driver can pass a handful of others on a restart, they have little hope of gaining more than that between yellow flags.

The string of stand-alone races helps in terms of drivers being able to gain points, though a handful of drivers in part-time rides also took some good finishes.

Right now, the points cutoff for a playoff spot sits with 11th-place Brendan Gaughan, who has 20 points of padding over Dakoda Armstrong heading to Richmond.  That’s sort of, kind of, maybe safe if nothing crazy happens to Gaughan early. Ross Chastain sits an unlikely 35 points behind Gaughan, so something really bad would have to happen to the No.62 for Chastain to capitalize. What throws it all out the window for Gaughan and Armstrong is if a full time driver below them in points scores the win at Richmond, which is unlikely but possible. (It’s also another indication that the health of the series isn’t strong when just 21 drivers have run the full docket of races for points).

Does all this mean that stage racing doesn’t work in the lower series?  In its current form, it hasn’t worked.  The solution lies in either staggering the stage lengths drastically, so that one of the first two demand pit stops before the end of the stage, whether under a caution if one flies or under green, or cutting the shorter races in the lower series to two stages instead of three so a stop becomes necessary.  That forces strategy. Otherwise, the system leaves too many points on the table in that there’s no way anyone can out-play a faster car to get them, the way they can in a Cup race.  The other solution is to award those top-10 stage points to the top 10 points-earning drivers in each stage.

With the series coming down to the wire for payoff berths, it’s hard to ignore that over 300 points went either unearned (NASCAR simply doesn’t award stage points for any position held by an ineligible driver) or at least unused for title purposes. To a lot of drivers, those points would look pretty good right about now.

Whelp, exhibitionist’s affects on regular driver’s finishes & points standings is a historic issue. Affecting “chases” or “stages” is just a new wrinkle. More importantly, it’s corporate exhibitionists exploiting purses & sponsors that most hurt the bottom lines of the ‘regular” teams. And the teams most affected by exhibitionist are not in contention for championships under this, that, or the other format. I would love to see the accounting calculation re: how much the earnings of regulars (let’s just say Jenifer Jo Cobb Racing for inatance) is diminished by corporate exibitionists, bc I am sure it is catostropic, but, oh yeah… purses are “super-secret” in Nascar’s realm to stem “alt-fake news” (aka: the truth). Nice version of reality.
Regardless of that CLEAR & long term systemic pit-fall, & as I have said from the day they disclosed the “stage” formats, “stages” obliterate & dictate race strategy to competitors, & turn the races themselves into exhibitions. So, I would not call it a “ghost”. For me it is more like one more in a series of predictable pitfalls. There-in, the “playoff points” scheme, across all 3 categories, is a contrived perversion, as if the “chase” format wasn’t to begin with. Not to mention the “win & you’re in” aspect is essentially eliminated at most NXS events. Which leads back to your crux. The regulars rely on regular points which – after all the exhibition participation – are not at all an integral reflection of how the NXS drivers & teams performed seasonally. It’s just a meaningless farce! Especially considering guys like Ky Lar & A Dill who are young enough to essentially have no limitations on participation, AND are selfish enough to think nothing of dumping an NXS regular into the fence.
All this might have succeeded in making races “less boring” for the vitriolic short-attention-span neophyte crowd. But in doing so, they no longer host consummate RACES! Hence alienating legions of avid devotees who made the brand what is it (or was)! Who does that to their loyal customers? So, now it is all reduced to unadulterated BUNK! What does Nascar have if not for meaningful racing?
Real race categories don’t humor imbecilic gimmicks, or sell their brand’s sporting integrity down the river. Nascar now competes with Formula Drift & Monster Truck grade horse-pucky. They are not within sniffing distance of the competition the once dominated. With IMSA a few weeks ago, Indycar last weekend & Trans Am this weekend at my home track (WGI), I attended the former two & will be at the latter. I don’t have two cents or the time of day for Nascar’s ethical bankruptcy & have not attended a race since the SuperBrad vs. Marcos snail-trail slugfest at WGI. Nor will I until “stages” are relegated to the wrong side of the history books. As it is, I am perfectly content with that WGI Nascar memory being my last of theirs, bc nothing will top it!
By all means, YES! More NXS exhibition driver limitations. Ie: 3 – 4 races for 1 – 3 year Cup drivers. ZERO participation after the 3rd years. Exemptions: NXS & CWT team owner/drivers are exempt in the series their team runs in, but limited to 5 – 7 races per series. And 5 year Cup vets can run unlimited one-offs for NXS or CWT teams with more than 1 year of series tenure. This would foster young motorsport personalities, & steer exhibitionists & sponsors AWAY from corporate exhibition teams, & toward undercard teams. What could possibly go wrong?
But more over, kick the (“chase” & “stage”) contrived & perverse gimmickry to the curb. Nice to see your feelings (re: “stages”) have begun to matured Ms. Henderson. I have half-a-mind to tell ya’, I told ya’ so. Ha! :-D