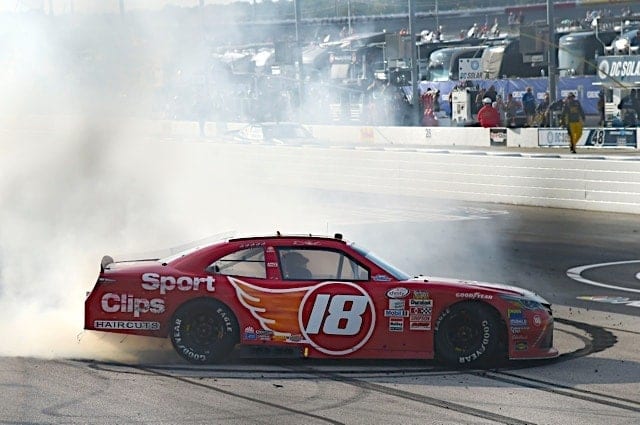 Once again, a Darlington Raceway trophy came down to the last corner for the XFINITY Series.

This time, it was Denny Hamlin and Joey Logano, who made contact down the backstretch on the final lap of Saturday’s VFW Sport Clips Help A Hero 200. That set them each up for the hardest corner of the day, as Logano took it low under Hamlin.

Hamlin, however, kept the momentum on the high side, clearing Logano off after a bold crossover move in Turn 4, winning at Darlington for the fifth time in his XFINITY career. The victory also continues a streak of eight straight top-two finishes for Hamlin at the 1.366-mile track.

“The best option for me was to run high in Turns 3,4,” Hamlin said. “The key was to run in as far as I could, then hit the brakes and go to the inside to switch him over. Glad I was able to clear him or else it really could’ve gotten excited.”

Logano restarted with two laps to go from the lead after winning the race off pit road with 10 laps to go. After leading the most laps of the day at 58, Logano was simply outmaneuvered in the final corner.

“He knew what I was thinking and I knew what he was thinking,” Logano said of Hamlin. “It was either that or wreck each other. Denny and I usually race pretty well, so we were going to race clean for the win.”

Kevin Harvick came home third after leading 54 laps. The winner of both stages on the day lost the lead on the final round of pit stops and was a spectator for the last lap show up front. Erik Jones and William Byron completed the top five.

In a race bent on showcasing NASCAR’s rich past — with throwback schemes, firesuits, crew gear, etc. — it was only necessary that Saturday was a hot, slippery day on track. With a blazing sun, the race saw nine cautions, the most since 2009.

Among those yellows was Elliott Sadler, the ex-points leader who got turned by Erik Jones to bring out the day’s final stoppage. The JR Motorsports driver finished 33rd, his worst finish in more than three months.

The crossover move by Denny Hamlin! He WINS at Darlington Raceway! pic.twitter.com/14IGnu3YEd